Navigation is defined as “the science of locating a position and plotting a course.” The GPS shows you your exact location anywhere on Earth (global), any time and in any weather. The system consists of 24 satellites in orbit 20,000 to 26,000 nautical miles above the earth. There is a range of distance because the orbit is not completely circular. It is, rather, more elliptical in nature. The satellites are arranged so that there are four satellites placed in each of six orbital planes. Each satellite takes 12 hours to complete one orbit around the Earth. To receive accurate navigation information, data from a minimum of four of these satellites is required. In many instances there are up to six or ten that can supply information to a receiver. There are worldwide ground stations that monitor the satellites continuously. With a suitable GPS receiver, the signals transmitted from the satellites can be detected and location displayed. This system is a one-way, receive only, system; i.e. the only transmission that takes place is that from the satellite(s).

GPS was first conceived around 1974, with the first satellite being launched in 1978, and was originally designed to be used only for military applications. Initial applications were strictly military and that was where the technology was perfected. Later it was made available for commercial and civilian applications. Dual-use systems can now be accessed by both types of users. This is another example of technology developed for military applications that is later adopted for commercial use. Another example, mentioned earlier, is spread spectrum, now used in secure commercial telecommunications. 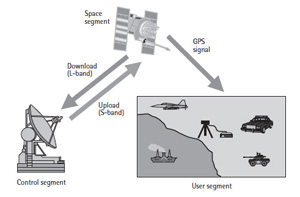 GPS consists of three segments (see Figure 10). These segments are: the control segment, the space segment and the user segment.

The control segment consists of a worldwide network of tracking stations. There are five tracking stations throughout the world, with the master control station being located in Colorado Springs, Colo (The other stations are in Hawaii, Kwajalein, Diego Garcia and Ascension Islands). As its name implies, the master control station is where the main control functions are carried out. The primary function is the tracking of the satellites to determine and predict satellite locations, the behavior of their atomic clocks and atmospheric data. Figure 10 shows that the control segment transmits an upload and receives a download. This is done with two carriers of different frequencies. These are designated as L1 (1575.42 MHz) and L2 (1227.60 MHz). With these signals, GPS corrects a major error, ionospheric delay. This error is due to the fact that in the upper part of the atmosphere there are ultraviolet rays and X-rays coming to Earth from the Sun that interact with gas molecules and atoms that are above the Earth. The area in which they interact is the ionosphere (50 km to1,000 km above the Earth). This interaction causes a delay in the signal which is measured and corrected using L1 and L2.

The GPS space segment consists of the 24-satellite group that was discussed previously. Each satellite transmits a signal that consists of: two sine waves (the carriers discussed above), two digital codes and a navigational message. The codes and navigation message are added to the carriers as binary modulations. The combination of the carriers and codes are used to determine the distance from a user’s receiver to the satellites. The navigation message contains the coordinates (location) of the satellites as a function of time. The signals that are transmitted from the satellites are controlled by very accurate on-board atomic clocks.

The user segment consists of the receivers of the signals from the satellites orbiting the Earth. These receivers may be hand-held devices, units that are placed in a car or truck, airborne units or units that may be mounted in a variety of fixed locations. A receiver intercepts a signal from the satellite, which travels at the speed of light. The signal takes a certain finite time to reach the receiver from the satellite. The difference between the time that the signal is sent and the time that it arrives at the receiver is multiplied by the speed of light, enabling the receiver to calculate its distance to the satellite. In order to determine its precise longitude, latitude and altitude, the receiver measures the propagation time from at least four separate satellites. If there are more satellite signals available, accuracy is improved. If the exact distance from a satellite in space is known, it determines location somewhere on the surface of an imaginary sphere with a radius equal to the distance to the satellite. Knowing the exact distance from two satellites determines location somewhere on a line where the two spheres intersect. With a third satellite, there are only two possible points, and one of them is usually impossible (see Figure 11). Accuracy increases with the measurement of more satellite positions. An important aspect to note is that GPS is based on a system of coordinates called the World Geodetic System 1984 (WGS 84). This system is similar to the latitude and longitude lines on a typical world map. The WGS 84 system, with several more recent updates, provides a built-in frame of reference for all geo-location activities.

An area of extensive growth in the 21st century is the use of GPS in everyday lives. It is used, for example, by police, fire and emergency medical units to locate the closest unit to an emergency and enable dispatchers to expedite units to a precise location. Such areas as fleet vehicles, public transportation, delivery trucks and courier services use GPS receivers to monitor vehicle locations. The use of GPS in automobiles and smartphones is ubiquitous. It is central to the operation of ride-share services such as Uber and Lyft, and is a key component of autonomous vehicle development. 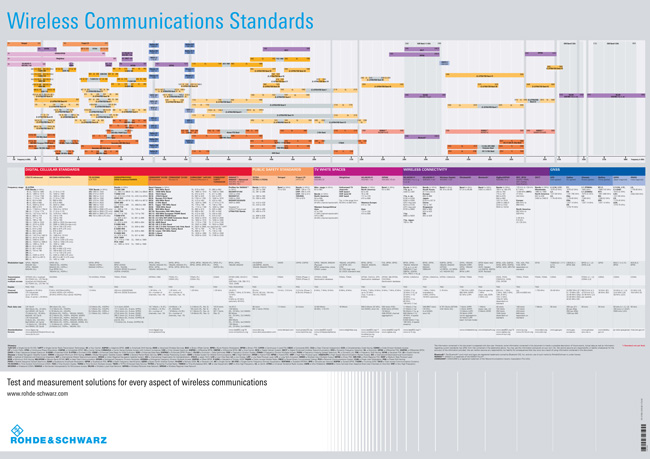 Many mapping and surveying companies also use GPS. Such areas as wildlife management and threatened species areas have GPS receivers and small transmitters attached to certain species of wildlife to help determine population distribution patterns and also some sources of diseases in these animals. Archaeologists and explorers also are using the GPS to carry out their research in areas that may not be very accurately mapped.

There are many applications of RF and microwave technology, military and commercial, across the entire spectrum. Figure 12 is a comprehensive summary of current commercial applications, frequency allocations and the governing wireless communications standards. Specialized texts and technical publications present a great deal more information on these topics; this tutorial is designed to be a general overview.