Mobile telephones originated in the late 1940s but did not find wide use due to high cost and limited frequency allocation. In the 1970s, this last restriction was removed when the 800 to 900 MHz Band was allocated for mobile communications, and, as the technology has advanced, the cost of a mobile communications system (i.e. cellular telephone) has come down considerably, as the user has experienced revolutionary advances in features and performance. 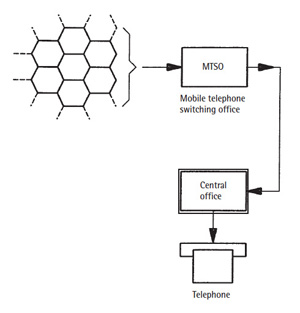 The basic cellular concept can best be pictured as a group of automatically switched relay stations. A populated area is divided into many small regions called cells. The cells are linked to a central location, called a mobile telephone switching office (MTSO), which coordinates all incoming calls. Along with coordinating calls between cell sites, the MTSO also generates time and billing information. A diagram of a cellular system is shown in Figure 7. Each cell has a transmitter/receiver combination for a certain section of an area. The main block, the MTSO, is the control area for the system. It is the unit that connects the caller to the party the caller is trying to contact. If the caller is moving (e.g., in a car), the MTSO senses the level of the signals being used and automatically switches the call to the appropriate cell so the transmission is completed with the best clarity possible. The central office provides the same functionality as the central office in a conventional telephone system, that is, it provides a connection between one phone and another. 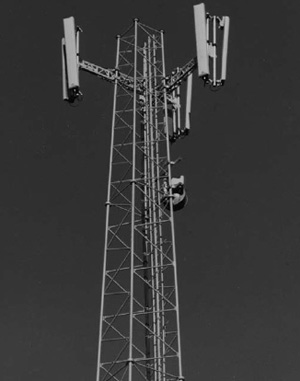 The cell site is actually a special transmitter/receiver combination. Because it covers only a small geographical area, the unit is relatively low power. That allows other cells to operate on the same frequency, since the power is low enough such that no interference occurs. This feature is important since the many cells in an area would interfere with each other if it not for the low power requirements placed on each cell. Thus, many cells can exist in a geographical area, all operating at the same frequency and nicely coexisting. Figure 8 shows a cellular telephone site.

The 800 to 900 MHz frequency band allocated for cellular telephone service ranges from 825 to 845 and 870 to 890 MHz. For the cellular phone, the lower end (825 to 845 MHz) is used for transmitting, while the upper end (870 to 890 MHz) is used for receiving. At the base units (cell sites), the frequencies are reversed. This approach is logical, because a phone’s transmitter is the cell’s receiver and vice versa. Within the assigned bands, 666 separate channels are assigned for voice and control, 333 in each band. The bandwidth for each channel is 30 kHz. A person making a cellular telephone call enters a local seven-digit number or a long-distance 10-digit number. The caller then presses the send button, which transmits data to a channel. From the cell site, the data is forwarded to the MTSO with the cell site’s identification number. Once the MTSO detects that the cellular phone is on the proper channel, the call is sent to the central office and then to the “callee’s” phone. This may seem like a time-consuming process, but it is accomplished in a very short period of time. When a cellular phone’s signal strength decreases because of the distance it has been traveled, the MTSO searches through the cells to find the one with maximum strength and automatically switches the conversation. This process is called a handoff, which the user never sees or is even aware of.

Most cellular telephones are used in a local area where the phone is originally registered. When it is necessary to operate the phone outside that selected area, the system incorporates a scheme called roaming. Roaming is possible only if the area you are in has cellular service and agreement has been reached between telephone companies and their users. Many areas of the country have roaming capability, thus greatly extending the range of cellular systems. Roaming is a handy feature for those who do a lot of traveling to different parts of the country.