When most people hear the term microwave, they think of microwave ovens. That is natural and perfectly appropriate, since microwave ovens operate at 2.45 GHz, which is in the microwave and wireless frequency band. The microwave oven is a device with a high-power electron tube (magnetron) that generates and radiates electromagnetic energy into food to be prepared. It cooks the food by heating the moisture inside the food, i.e. it cooks from the inside to the outside.

Figure 1 is a diagram of the electromagnetic spectrum illustrating the respective frequency bands for common communications, navigation and radar applications. Some of the more familiar applications are AM and FM broadcast bands for radio, television channels, cellular phones, global positioning systems (GPS), personal communications services (PCS) and direct broadcast satellites (DBS). Each of these applications has a different frequency of operation. They are in an FDMA mode, i.e. operating over a specified band of frequencies all the time. There is no planned time gap and no time sharing of stations or channels. 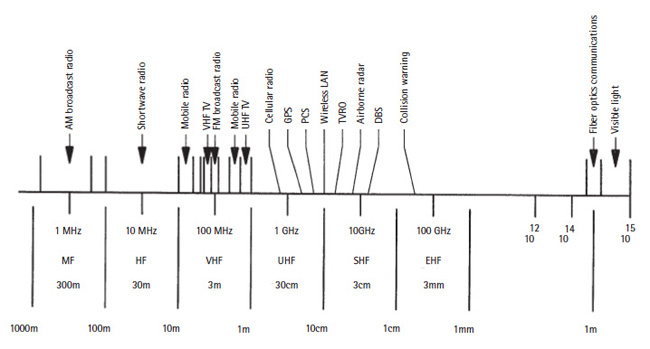 Some applications, in particular, are summarized below: 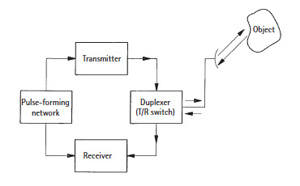 A classical radar (see Figure 2) sends out a high-power short duration microwave pulse generated by a transmitter through a beam-focusing antenna. The pulse is controlled by a pulse-forming network and begins a time sequence when it is transmitted. The pulse strikes an object or target that reflects the energy back through the antenna to the radar receiver. The time it takes for the pulse to be transmitted, bounce off an object and be received determines the distance that object is away from the radar antenna. The angle of the antenna beam to the object determines the azimuth and/or elevation.

To further understand radar concepts, it is necessary to define some additional terminology: 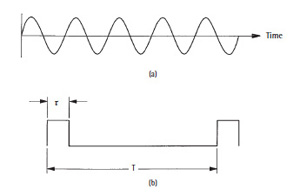 The applications and functions of radar systems can be categorized as search and warning, tracking and measurement and imaging.