The earliest cell phones used analog utilized analog modulation of voice signals onto a radio frequency carrier. This is known as the first generation of the cellular phone network, or 1G, which established the foundation for where we are today. 1G was provided a fundamental multi-user wireless capability, but it was limited. Because it was analog, it supported only one user per 30 KHz channel and could support only voice communication. 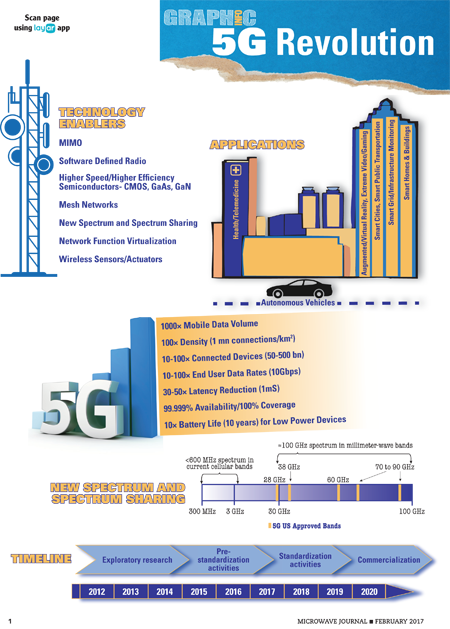 3G cellular was introduced in 2001. Using code division multiplexing (CDMA) as its foundation, it is an enabler for mobile audio, graphics and video applications. CDMA opens up the entire bandwidth, allowing multiple users to share the same frequency and communicate at the same time.  In addition it established a single global network protocol with compatibility over a variety of devices, with potential access to the Internet from any location. Universal Mobile Telecommunications Service (UMTS) is a 3G broadband, packet-based transmission of text, digitized voice, video and multimedia at data rates up to 2 megabits per second (Mbps).

Introduced in 2009, 4G provides transmission rates 10x 3G, or higher. It prioritizes traffic according to the application and dynamically adjusts resources to optimize needs. While GSM uses TDMA and 3G uses CDMA, 4G uses orthogonal frequency division multiple access (OFDMA). Orthogonal frequency division multiplexing splits a serial data stream into several parallel streams transmitted through separate closely-spaced narrowband channels. This has the effect of reducing interference and crosstalk without sacrificing throughput.  Long term evolution (LTE) is an instantiation of 4G that employs IP addresses, based upon the TCP/IP networking scheme; each device on the wireless network has a unique address. The LTE standard was created by the Third Generation Partnership Project (3GPP) and has been adopted by most worldwide wireless carriers.

5G LTE promises a revolution in wireless communications technology to enable the large scale implementation of the Internet of Things (IoT). It extends the existing approved RF spectrum into the mmw region to provide wider bandwith for more subscribers, higher speeds and lower latency in order to open up new applications for smart homes, cities and infrastructures, virtual reality and autonomous transportation (see Figure 9). Firm dates have not been established for the development of 5G, but a number of companies and organizations have their own timelines. Initial 5G standards were approved by the 3GPP in December 2017.

Understanding the wireless local-area network (WLAN) requires first knowing something about its predecessor, the local area network (LAN). Before wireless, there were wired LANs. This is a group of computers and associated devices that share a common communications line, usually a coaxial cable. These networks span a relatively short area such as a single building or group of buildings. LANs can be connected to other LANs over a greater distance by way of telephone lines. This increases the coverage area greatly and offers much more flexibility and the ability to communicate with locations beyond the single building or group of buildings.

WLAN is the next generation of the LAN. This is a flexible data communications system implemented as an extension to, or an alternative for, the wired LAN. WLAN is not a replacement for the typical LAN, but rather, an enhancement. Many have adopted WLAN for improved mobility. Installation speed is another advantage as well as installation flexibility, i.e. the wireless network can go where wires cannot go. Long-term cost benefits are much better with wireless networks, although the initial costs may be higher. Some who benefit from WLAN are medical personnel in hospitals using hand-held units to obtain information instantly, students and professors on college campuses accessing information for a variety of needs, training personnel at corporations exchanging information during seminars and short courses, and warehouse workers working with central databases to increase productivity.