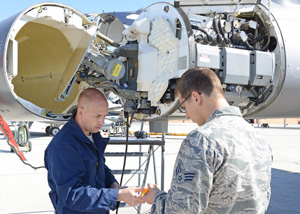 The search and warning function of radar is the one most people recognize. It is the detection of an object (e.g. an airplane in flight viewed on a radar screen by a ground-based radar or a land mass viewed by a ship-borne or air-borne radar).  Such “targets” are usually struck many times by the signal due to many scans (rotations) of the radar antenna. A typical area where you would notice this type of radar system is at an airport. Their antennas are especially noticeable at smaller airports, where they are much more visible and can be seen rotating. At larger airports the antennas, many of them protected by domes, are located in more remote areas. Another area where this type of radar system is visible is at shipping ports and marinas. Freighters, tankers, cruise ships and recreational yachts all have radar systems on them with rotating antennas for navigation and weather monitoring purposes.

Once a target is detected through a search function (scan), in some cases it is desirable to cease scanning and keep the radar beam focused on the target. This is called tracking. Tracking and measurement radars “lock” or remain on to a target and track it for a certain distance or for a certain time period. While locked to the target, a number of parameters may be measured, such as target size, range, velocity, acceleration and other features that can be used for identification and characterization. Typical military applications of these radar systems are for gun control and missile guidance. Figure 4 shows a typical tracking radar system.

Imaging radar forms an image that is two-or three-dimensional in nature, usually in azimuth and range coordinates (see Figure 5). A typical airborne application is the imaging of terrestrial features. As the radar moves over the ground, multiple radar returns are processed to form the image. This type of system can also be used to analyze mechanical systems for stress fractures and (with very low power transmitters) for some medical applications and can provide a three-dimensional image of a tumor to aid in cancer diagnoses.

Doppler radar was originally conceived for use in areas with mountainous terrain, where it was difficult to detect moving targets. Before the advent of Doppler radar, it was easy for an aircraft to slip into a mountainous region and proceed virtually undetected to a target. Conventional radar would not indicate a moving target, just a target, which could be an actual airplane or one of the mountains.

The Doppler effect, first described by Christian Doppler in 1842, is commonly demonstrated by standing at a train crossing as an incoming train blows its whistle. One notices a change in the pitch of the sound as the train approaches and then passes. From this change in pitch, the train’s velocity can be determined. This is the basis for police “speed traps,” which use very accurate Doppler radar systems (see Figure 6). Such systems are difficult to detect in time for speeding drivers to slow down. Usually by the time a radar’s transmit signal is detected by a radar detector, it is too late; the radar system already has recorded your speed.

In addition to military and police radar applications, systems may be found, for example, in manufacturing, where the position and the speed of a product on an assembly line must be determined for certain operations to be performed at specific times and at specific locations. An application that significantly impacts our modern civilized world is weather radar for predicting the paths of severe weather, such as tornadoes and hurricanes. Doppler weather radar systems can spot a storm and track it. This allows weather bureaus to warn and evacuate people before the storm arrives. Other applications include radars used in automotive collision avoidance systems and backup aids, as well as automatic door openers common in supermarkets and shopping centers.