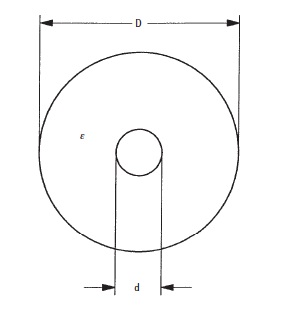 Figure 3 An example of return loss.

There are three basic parameters. The first is ε, the dielectric constant of the material used to separate the two conductors. Often, that material is Teflon, which has an ε value of 2.1. Other common dielectrics are polystyrene (ε = 2.56) or polyethylene (ε = 2.26). The dielectric is an important part of the coaxial line both mechanically and electrically. It is important mechanically because it provides the support for the center conductor and separation (spacing) between the center conductor and the shield. It is important electrically because the type of dielectric determines the velocity of the electromagnetic wave traveling through the transmission line. The higher the dielectric constant, the slower the electromagnetic wave travels. The second parameter is the outside diameter, d, of the inner conductor, also referred to as the center conductor. The third parameter D, is the inside diameter of the outer conductor (usually the shield). These three parameters determine impedance, capacitance, inductance, attenuation and cutoff frequency.

The ratio D/d is a commonly used in characterizing coaxial transmission properties. For example, three common coaxial transmission lines, RG-58, RG-59 and RG-62, look basically alike because their outside diameters are similar; however, RG-58 is a 50 Ohm line, RG-59 is a 75 Ohm line and RG-62 is a 93 Ohm line. Since one of the factors that determines the impedance of a coaxial transmission line is the D/d ratio, and since the inside diameters of the outer conductors are basically are the same, there must be three different d values. In fact, that is the case. The RG-58 center conductor diameter is 0.031 in., RG-59 is 0.083 in. and RG-62 is 0.025 in.

The dictionary defines flexible as “able to bend without breaking,” an excellent definition for flexible coaxial cable. It is a cable that is able to bend in many different directions and that, if the minimum bend radius for the cable is not exceeded, will not break or affect the electrical parameters of the cable in any way. This type of transmission line is one that can be used for applications in which the line must be bent around corners to make the necessary connections. It also is an excellent transmission line for use in a laboratory environment, where many connect/disconnect operations are needed and where there is no standard way of connecting a cable to a piece of equipment.

A typical flexible transmission line (see Figure 4), consists of four sections: a center conductor (solid or stranded wire), a dielectric (usually Teflon), a braided outer conductor and an outer covering. This construction is used for RG-58, RG-59 and RG-62 cables (see Figure 5). We have already seen that the center conductors are different to make the different impedances of each of the cables. The dielectric is basically the same, as are the braid diameters and the outer coating. This is where confusion can occur, because the visible portions of the transmission lines are so similar. 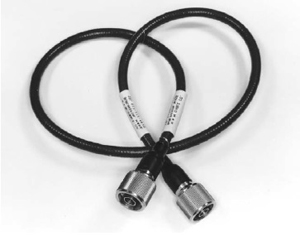 The center conductor can be either a solid wire or a series of wires in a stranded configuration. This is the “hot” lead of the transmission line, where the signal is carried. Also, it is the determining factor for the inductance and the resistance in the equivalent circuit. The center conductor is usually solid copper or copper cladding over steel. Because it is a metal and carries a varying current, an inductance is set up and there is also resistance. The current is electromagnetic, that is, there is an electric and a magnetic component. These two components are 90 degrees out of phase. It is a complex current that cannot be measured with a simple ammeter.

One of the functions of the dielectric is to serve as a spacer separating the center conductor and the outer conductor, but it also determines the electrical parameters of the transmission line, such as the characteristic impedance, capacitance per foot, attenuation, cutoff frequency and velocity of the RF and microwave energy propagating through the transmission line.