The other two common types of semi-rigid cable, 0.085 and 0.250, are used in applications where 0.141 may not be suitable. The 0.085 cable is used when there is very little room in which to maneuver, so the bends in the cable must be very small. This small-diameter cable fits this need, but at the price of higher attenuation than its 0.141 counterpart. The power-handling capability of the 0.085 cable also is less than that of the 0.141, which is understandable, since it is much smaller and there is less area to dissipate power.

Semi-rigid cable has many superior electrical properties over flexible cable. In all cases, it can handle more power and exhibit less loss than a flexible cable of comparable size. For example, a comparison of a length of RG-58 flexible cable with a length of 0.141 semi-rigid cable at five frequencies is shown in Table 2. These two cable types have similar outside diameters (the outer conductor of the RG-58 is 0.150 in.). Attenuation at 3 GHz, for example, is 0.215 dB/ft for 0.141 cable versus 0.41 dB/ft for RG-58. At that frequency, the 0.141 cable can handle 310 W, while the RG-58 cable can handle only 22 W. The RG-58 cable is also not specified at all for attenuation at 5 or 10 GHz and is not specified for power-handling capability at 10 GHz. Recall that all transmission lines have an upper frequency limits since they all act like lowpass filters. That is clearly indicated in Table 2 for the RG-58 cable.

The numbers in Table 2 might lead one to ask, “Why ever use flexible cables?” First, semi-rigid cables cost considerably more than flexible cables; an important consideration, especially in the commercial market. Second, for testing applications, semi-rigid cables are not very practical. Most tests require many connect/disconnect operations, which can put strain on the cables. Also, as the tests change in a lab, there are different positions for the cables that are formed much better with flexible cables. Third, in some finished products, the cables must meander through the chassis to various locations. Semi-rigid cables are not suitable for those applications in many cases. 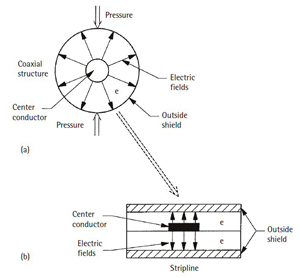 It is necessary to clarify the term ground plane. In conventional low-frequency, DC and digital circuits, a ground is a point on a chassis where wires carrying return current are terminated to ensure a common potential. In RF and microwave circuits, electromagnetic waves sent down transmission lines require an entire (continuous) plane or large area of ground rather than a single point. High frequency signals have periodicities that are perturbed by point grounds. That is why circuit boards have copper plating across their entire outer surfaces.