Stripline is of uniform construction. Figure 9 depicts that uniformity, with the circuit being completely surrounded by dielectric on all sides. Because of that uniformity, stripline has a natural shielding effect on the circuit because it is completely enclosed, with metal on top and bottom. A stripline package also has metal on the ends and sides, resulting in a circuit within a complete metal box with excellent shielding.

An important parameter in stripline is the ground-plane spacing (GPS), shown in Figure 11. GPS is, as the name implies, is the spacing between the inner surfaces of the ground planes, designated as b.  It is used to calculate the width of transmission lines (w) that are etched on the circuit board and the spacing (s) between two transmission lines. The relationships between w, s and b are shown in Figure 12.

A close tolerance on circuit board dielectric thickness must be maintained to ensure that the widths and the spacings are as accurate as possible. Consider that the characteristic impedance of a strip transmission line is determined by the ratio w/b; and similarly, the coupling of energy between two transmission lines is determined by the s/b ratio. If the b dimension in the denominator is not tightly controlled it is difficult to maintain a desired characteristic impedance as well as a desired level energy coupling between circuits. 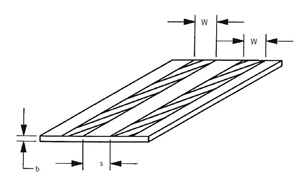 Stripline has become a popular medium for the construction of transmission lines and microwave circuit components. A drawback to using stripline for some applications is also touted as an advantage; it is a sealed enclosed structure. Although it offers good circuit shielding, there is limited access to circuit elements for test and troubleshooting. Because stripline packages contain laminated boards laminated boards and are often epoxy sealed, semiconductor devices such as diodes and transistors are generally not integrated into the structure, unless the integrated module is considered non-repairable. For many applications, stripline is an excellent choice as a high frequency transmission line. Where there is a requirement for excellent shielding, strip transmission line should be considered. Also, stripline is popular for the construction of passive components, such as couplers, power dividers, filters and impedance transformers. Figure 13 shows a stripline circuit with the top dielectric and ground layers removed to show the center conductor patterns that form the components.

Microstrip transmission line solves the problem of inaccessibility that stripline poses. Microstrip, shown in Figure 14, is similar to stripline, except that there is no top dielectric or conductor layer. There is nothing but air on top of the circuitry and a dielectric material underneath with a bottom ground plane. The width of the transmission line is designated by w, t is the thickness of the copper circuit and b is the thickness of the dielectric. It can be seen that b is similar to that for stripline except that it represents only one thickness of material. 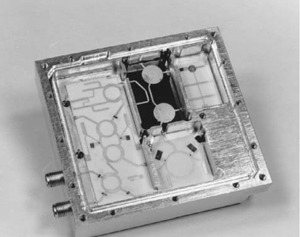