We use cookies to provide you with a better experience. By continuing to browse the site you are agreeing to our use of cookies in accordance with our Privacy Policy.
Home » Signal Transmission from Antenna to Receiver
European Industry News

Signal Transmission from Antenna to Receiver

Transmission and distribution of satellite signals in large facilities

Whether in a cable headend, earth station or teleport, reliable signal transmission and distribution is the backbone of a facility’s successful operation. From signal reception at the satellite dish, to processing and distribution within a facility and final distribution, signal quality availability must be properly engineered and managed. Redundancies play a key role in order to guarantee maximum reliability and uptime.

Satellite Earth Station antennas, often referred to as satellite “dishes,” are used for receiving satellite signals from television programming networks at cable head ends and other facilities. Their size may vary from 1 to as large as 30 m in diameter, depending on the frequency, satellite position and service requirements. 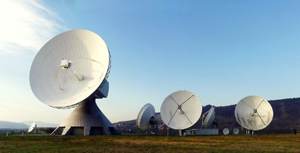 The signals are transmitted from space to earth at different frequencies and polarizations between satellite and ground antennas. Television signals are usually sent in the Ku- (10 to 18 GHz) or C-Band (3 to 6 GHz) or a combination, depending on local and regional environments. A growing number of signals around the world are being broadcast at Ka-Band (20/30 GHz). The direction of the electric field of the received electromagnetic wave is called polarization. The Vertical and Horizontal polarization are perpendicular to each other. The separation is performed by an antenna feed, which feeds the signals to a Low Noise Block Converter (LNB).

The LNB frequency converts the weak signals received from satellites and amplifies them for delivery via cables to indoor reception and decoding equipment typically racked with other electronic networking units.

The high frequency input signals received (or downlinked) from the satellite in space are typically down converted by the LNB to the L-Band (950 to 2150 MHz) or extended L-Band (850 to 2450 MHz) frequency range and transmitted via cable, such as coaxial copper cables. Specially shaped antennas provide the ability to mount more than one LNB to receive several different satellite positions simultaneously.

Lightning protection devices directly installed on the antenna, or in the downstream signal path, can be used in order to protect equipment in the downlink chain from over-voltage damage.

The next step is the transmission of down converted signals from the LNB to the Integrated Receiver/Decoder (IRD), which processes and decodes the signals to baseband. This link is sometimes called the Inter-Facility Link or IFL. The electrical transmission over coaxial cable from the LNB often leads to attenuation losses, especially at longer transmission paths. Amplifiers are commonly used at the beginning of the route to compensate for losses. Otherwise, the signal level and Signal-to-Noise Ratio (SNR) can be too low to ensure proper signal quality.

For antennas and systems with transmission paths of less than 100 m from LNB to IRD, transmission over coaxial cable introduces minimal losses and is typically acceptable for cost reasons. For larger cabling distances, or for systems with multiple antennas, where bigger line losses over coax would result, RF-over-Fiber transmission delivers major advantages and should be used. In addition, if a particularly high signal quality is required, coaxial IFL links may not be a prudent option. 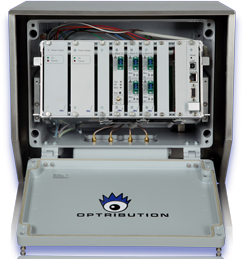 The conversion of an LNB output signal onto optical fiber usually takes place in dedicated devices that are housed outdoors in the rack shelters at an antenna site close to the antenna. Compact units are typically used, such as RF equipment supplier DEV Systemtechnik’s DEV 7152 outdoor chassis (see Figure 2). Devices mounted directly on the mast of the satellite dish are also in use. These devices can provide redundancy features for the link to the IRD (Receiver) in addition to performing electrical-optical conversion. They can also be used to set important parameters for onward transmission of the downlinked signal.