We use cookies to provide you with a better experience. By continuing to browse the site you are agreeing to our use of cookies in accordance with our Privacy Policy.
×
Home » Blogs » 5G » Microwave Advancements Meet 5G Backhaul Requirements

There has been a lot of talk about 5G and its ability to dramatically alter how we live and communicate. At this point, however, there are as many more unknowns about the technology than knowns, due to the fact that the standard is still being developed and experts are still testing what technologies will be best to support the 5G platform.  What we do know is that 5G will start out as an ultra-high capacity fixed broadband technology, serving end users with gigabit levels of capacity. As the technology develops and standards are solidified, mobility and thus, cell density and complexity will increase as ultra-high capacity fixed broadband evolves into ultra-high capacity or “extreme” mobile broadband. We also know that 5G will be used to enable massive machine to machine (M2M) communications, connecting billions of sensors, meters and machines.  5G also will also be used to enable critical machine communications, like remote surgery and automated vehicles, through ultra-Reliable and Low Latency Communications (uRLLC).

In order to facilitate these applications, the entire network, including transport or backhaul, will need to be radically redesigned.  Backhaul is critical to the success of 5G, which is why there is so much attention on fiber and millimeter wave spectrum.  Companies like Verizon and AT&T are swooping in buying up fiber, tower, and spectrum rights. In the USA, fiber is the most common type of backhaul, due to its high capacity, high reliability, and pervasive infrastructure.  Although the fiber network is extensive, it does not reach every building, tower, or point of presence, and the cost to extend fiber to the last 100 yards, can often be cost prohibitive to the business case. Thus, to complete the missing links in the network, other technologies like microwave radios will be essential.

However, skeptics ponder if microwave has the ability to adequately meet 5G backhaul requirements in terms of capacity, complexity, and stringent latency requirements. Based on what microwave vendors have already demonstrated, Sky Light Research believes that it does.

An initial test bed of millimeter wave spectrum characteristics has been on display in the form of ultra-high capacity broadband for fixed wireless access. While tier 1 mobile operators are able to fund multi-million dollar acquisitions of large swaths of wireless spectrum to provide gigabit levels of broadband to the home, regional service providers aren’t so lucky. This is where unlicensed 60 GHz and lightly licensed E-Band spectrum becomes especially valuable — it enables smaller regional providers to effectively compete with those providers that own fiber and large amounts of spectrum. Companies like Monkey Brains and WebPass, which is Google’s fiber play, are having much success using millimeter wave links for gigabit capacity fixed wireless access to residential markets. 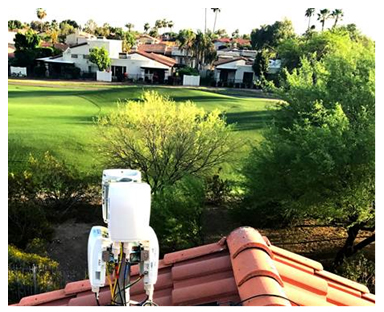 One of the attractions to 5G is its flexibility and the variety of services that it will enable. As more options are added to the network, the network becomes more complex, requiring a high degree of flexibility in a dynamic network built from multiple manufacturers.  Software defined networks (SDN) helps to make the complex 5G network easier to manage by implementing a variety of software management protocols that automatically manage the network’s traffic based on dynamic physical attributes of the network.  Although SDN for microwave is a relatively new concept, forward thinking carriers moving toward 5G are doing so with SDN.   Vodafone has stated that “5G has key components that really can’t happen without SDN and NFV and those include low latency applications, self-healing networks and an ability to manage mobile applications at the very edge of the network using a technology called Network Slicing, used to create multiple dedicated end-to-end virtual networks.”  Although Vodafone is speaking about the greater network, SDN saves the carrier money, and SDN in the transport is no different.  SDN on a microwave link can automatically re-route traffic in peak times off congested links in order to keep data traffic flowing.  It also can make the network more efficient and keep operational costs in check by managing link usage and adjusting traffic to one or more links.

While the industry agrees that more capacity will be required for a 5G mobile network, what is more speculative is exactly how much capacity will be required. According to Ericsson, multi-gigabit capacities are expected, but only at a few very high end sites. The majority of sites will require less than 10 Gbps of capacity and microwave is already able to achieve 10 Gbps with dual band aggregation techniques.

Microwave manufacturers have proven that by combining two microwave links together, one from the traditional band and one from the millimeter wave 70+ GHz band, backhaul capacity of 10 Gbps can be achieved at a distance of up to 7 km. Capacity is projected to go even higher as the technology is refined and the W-Band (90 GHz) or D-Band (130 to 170 GHz) are used. To meet these demands, almost every vendor including Aviat, BridgeWave, Ceragon, DragonWave, Ericsson, NEC, SAF, SIAE, Siklu and ZTE, have 5G ready radios shipping or near shipping. Two microwave manufacturers have made formal 5G platform announcements. Nokia was the first, demonstrating their 5G “Wavence” platform at Mobile World Congress in February 2017. Huawei followed suit in the summer of 2017 with their announcement of their “Multi-wave, ready for 5G” strategy.

Already, capacity shifts are starting to be seen in microwave shipments. Looking at the last nine quarters of data, the trend toward higher capacities is apparent. Since 4Q 2015, radios with 400 Mbps to 1 Gbps capacity are the bulk of shipments and starting in 1H 2016, radios with at least 1 Gbps of capacity have started taking share from lower capacity radios. 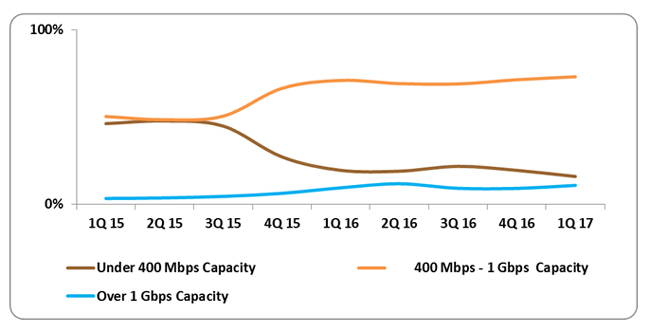 Another way to increase capacity is through cell densification, by overlaying macro cells with small cells. If this method is chosen, then a combination of 60 GHz (V-Band), 70 to 80 GHz (E-Band), traditional microwave radios and/or fiber will be used. 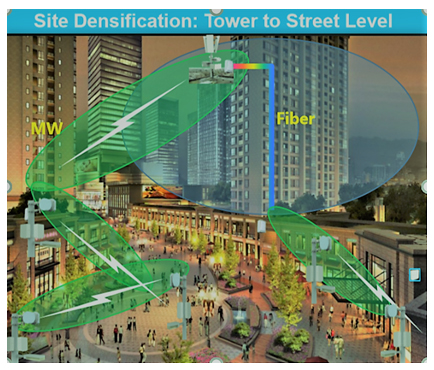 The cell will be built on the street level using very short, high capacity hops by utilizing unlicensed 60 GHz spectrum. In some regions where 70 to 80 GHz is inexpensive, then 70 to 80 GHz may be used as well. In an effort to reduce clutter on the street, radios will be hung on street lights, traffic poles and bus stop signs. To eliminate any problems with sway or NLOS that may be inherent with alternative masts, a wide beam antenna will be used and radios will be placed strategically to bounce signals off each other to work their way around buildings and other obstructions. Additionally, a mesh network topology may be used, which will create multiple paths a signal can take if a hop is blocked by a passing bus or a blooming tree. The street level signal will be aggregated and carried to the top of a building using either a microwave link or a 70 to 80 GHz hop. Once again, in lieu of towers, operators will take advantage of already existing infrastructure — hanging radios on the sides of buildings and carefully disguising them so they are aesthetically pleasing to the community. Once the aggregated signals hit the rooftop, the signal will be carried to another cell site via microwave link and absorbed into the greater macro network. Alternatively, the radio on the top of the building may be connected via fiber to the building, and will be absorbed into the network at that point. Either way, a multitude of technologies will be required, further highlighting the need for SDN enabled microwave.

To facilitate this network topology, microwave radios are being designed in all outdoor, small compact form factors that easily blend with the urban landscape. Although outdoor small cells have not been widely deployed, operators are already taking advantage of this new, smaller form factor as evidenced by shipment data from Sky Light Research.

Another benefit of cell densification is that smaller cells enable lower latency, which is critical to the real-time nature of many 5G applications (e.g., automated cars, surgery, etc.). 4G legacy networks are not able to support these critical applications, thus opening up an additional revenue stream for operators willing to make the 5G network investment. The chart below illustrates current and future 5G latency requirements: 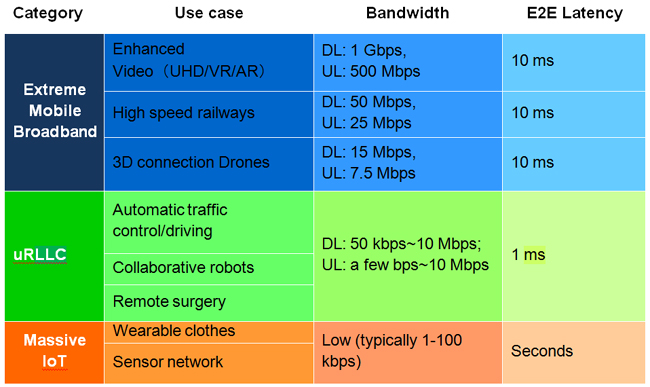 To meet the 10 ms requirement, backhaul latency cannot exceed 5 ms. These low latency levels are attainable through a variety of methods already being used by microwave vendors today. One way is to create smaller cells which shortens the transport path and thus lowers latency; another way is to use wider channels which also improve latency — both of these techniques are ideal for millimeter wave bands above 70 GHz or for the dual band microwave/millimeter wave solution.

5G promises an exciting future, and with the ongoing advances in microwave, it will be a key component of the network. Through the use of new spectrum, SDN and lower latency achievements, microwave vendors are demonstrating that the technology is able to meet the 5G backhaul specifications economically and efficiently for the foreseeable future.

In fact, years ago, when 4G was being developed and tested, there was a lot of talk about the fact that microwave would not be able to adequately meet the needs of LTE. At that time, TDM technology was currently being deployed — and had advancements stayed stagnant, it would not have been able to, but microwave technology evolved into packet microwave, and as we know today, microwave easily satisfies the needs of 4G backhaul. Fast forward to today and the same discussion is occurring with 5G. Once again, microwave technology is being questioned and once again it is evolving to meet future requirements. This summer, SLR asked operators what their level of comfort was with microwave meeting their needs for 5G mobile backhaul. The following was their response. 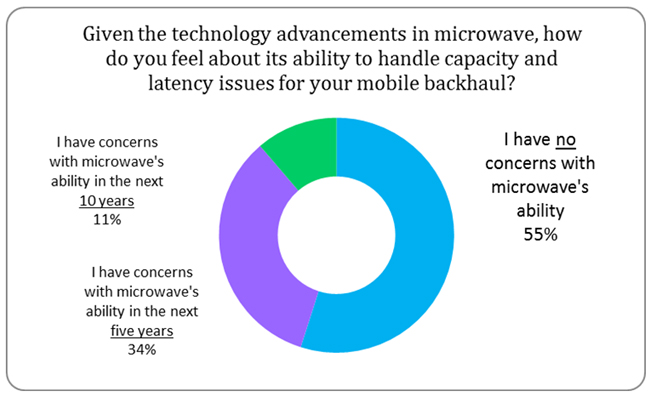