We use cookies to provide you with a better experience. By continuing to browse the site you are agreeing to our use of cookies in accordance with our Privacy Policy.
×
Home » Blogs » 5G » Is millimeter wave technology future of wireless communications?

In the age of digitalization, high-speed communication is on higher priority for all (consumers and enterprises). What if the wireless carriers impose caps on the rapidly growing data traffic and raise prices? What if we run out of airwaves for our striking increase in wireless data usage on our gadgets? So, how are these basic realities – high-speed communication needs, bandwidth shortage, and exploding data on several devices are addressed?

All the electronic devices in our home use specific radio frequency spectrum which are typically restricted to frequencies of up to 30 GHz. This range is currently highly congested, hence modern wireless communication standards are focusing more on standards over 30 GHz (millimeter waves). However, carriers can only squeeze a specific amount of data in a particular radio spectrum. As the number of wireless connected devices have been increasing in multifold, the efficiency in carrying the data has been dropping considerably owing to the network congestion. To overcome with the increasing amount of data, companies and governments are exploring alternative ways and formulating various strategies. Some of the solutions being considered are efficient management of spectrum usage (exploring the access to unused frequencies that have been reserved for TV stations, federal agencies), usage of alternative technologies to cover short-range communications, such as Wi-Fi, LTE-U, wider-area broadband access, cognitive radios, and also exploring other unused spectrum, for example, millimeter wave spectrum. This article focuses on the overview of technological advances, applications, and outlook of millimeter wave technology.

The bandwidth shortage facing wireless carriers worldwide due to the rapid increase of mobile data growth and high-speed communication needs has driven the exploration of the millimeter wave frequency spectrum (30 GHz–300 GHz) that lies between the microwaves and the infrared waves.

The advancement in technologies over the past decade has enabled the widespread use of millimeter wave to address the challenges of lower frequency and high-speed communications. The evolution of communication technologies from 1G to 5G has taken almost five decades from 1G in 1980s to 5G in 2020s. The possibility of achieving data rates of up to 10 Gbit/s (gigabit per second), where the data rates are restricted to less than 1 Gbit/s in microwave frequencies, has increased the application of millimeter waves to automotive radar solutions, high-speed point-to-point communication (WLANS and broadband access), streaming high-resolution videos, carry large amount of data, mobile and wireless networks. 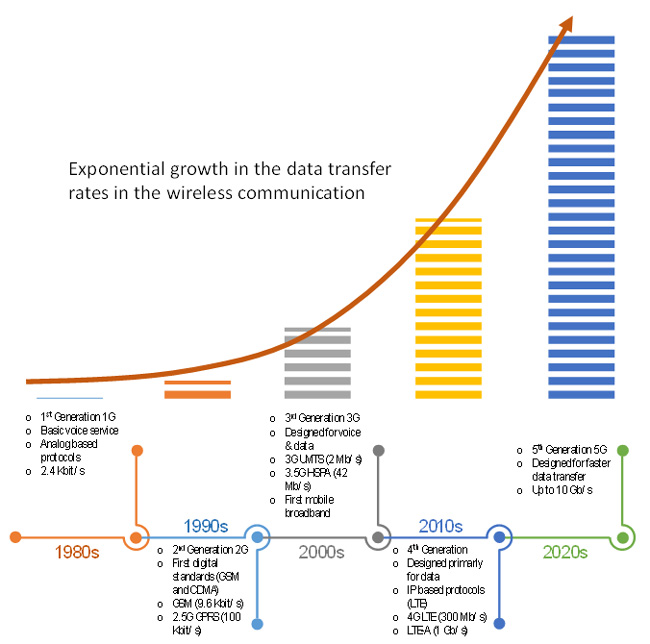 Now, a number of manufacturers are producing components that can handle millimeter waves and semiconductor technologies are capable of operating at frequencies up to 90 GHz, especially in V-band (57 to 66 GHz) and E-band (71 to 86 GHz) applications. The 60 GHz (V-band from 57 to 64 GHz) unlicensed industrial-scientific-medical (ISM) band is getting lots of attention, especially for short-range wireless technologies, including IEEE 802.11ad WiGig (wireless Gigabit) Technology and WirelessHD. The WiGig technology, based on the 60 GHz spectrum, enables devices to communicate for a short range (distance of about 10 meters) at high data rates of up to 8Gbit/S. Some of the typical applications of WirelessHD include transmitting video from a tablet, laptop, set-top-box, to an HDTV, from a game or DVD player to a TV set; wireless video cameras; and wireless HD projectors.

With the growing demand for millimeter components, manufacturers are now developing technologies and affordable components with new semiconductor materials, such as gallium nitride (GaN), gallium arsenide (GaAs), silicon germanium (SiGe), and indium phosphide (InP). These components are also manufactured at very smaller sizes of about 40nm to make these components applicable in a wide range of applications. With the growing applications, millimeter-wave circuits are being packed into ICs. Companies, such as Infineon, Freescale Semiconductor (Acquired by NXP Semiconductors in 2015), and NXP Semiconductors, have developed Radar transceiver chipsets for automotive and industrial radar applications.

Current mobile users require high-speed data transfer rates and more reliable services and the next generation (5G) wireless networks has the potential to deliver the required speed. 5G networks are expected to be driven by the increased wireless capacity and speeds offered by high-frequency millimeter waves. Today’s wireless networks are handling more traffic with more people and devices consuming more data than ever before. However, all the traffic is overcrowded on the same bands of the radio-frequency spectrum. Researches have been taking place in several universities across the globe and some cellular providers and other industry players have begun to test and use them to send data between two base stations.

Millimeter waves open up more spectrum and reduces the congestion on the current radio spectrum. Today, a few electronic components were able to operate in millimeter waves, hence the millimeter wave’s spectrum remained unused. However, this spectrum faces several challenges and acts as an obstacle for several players across industries. The major challenge has been the travelling media due to the poor penetration attributed to atmospheric and free-space path loss. Some of the challenges faced by millimeter waves include atmospheric absorption, free space loss, scattering of signal due to rain, mechanical resonance as these signal coincide with gaseous molecules (absorption increases at 24 and 60 GHz), degradation of system performance by brightness temperature, and non-line of sight issues (millimeter waves are blocked by physical objects such as trees and buildings, leading to signal loss and a reduced range), and costly components (Higher costs in manufacturing the small sized components with greater precision).

What is going on?

With advancements in millimeter waves and other 5G technologies, new wireless networks are expected to be built to meet the high-speed communication requirements of several applications, such as smartphone users, VR gamers, and autonomous cars. Currently, several companies and universities have set high expectations for high-speed communications (5G) through their tests. However, if the developments can solve the challenges faced by the components and data transfer medium in millimeter wave spectrum, then high-speed (5G) service could be delivered to consumers across various industries in the next three to five years. 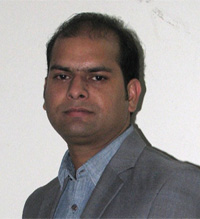 Sachin Garg is a Management & Engineering professional with almost 12 years of experience in Electronics & Semiconductor business in different applications like consumer electronics, automotive, healthcare, industrial etc. He has worked with the leading IT & Semiconductor companies like STMicroelectronics Pvt Ltd, NXP Semiconductor Pvt Ltd and Cognizant Technology Solutions and handled the business development of Semiconductor IP Market in R&D across various core industries.

Sachin is a post-graduate in International Business from Indian Institute of Foreign Trade (IIFT), New Delhi. Before that, he did his engineering in Electronics & Instrumentation from Birla Institute of Technology & Science (BITS), Pilani.