We use cookies to provide you with a better experience. By continuing to browse the site you are agreeing to our use of cookies in accordance with our Privacy Policy.
×
Stay Connected :
Home » Virtual Model Inspector for 3D EM Solver 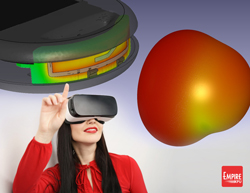 The Virtual Model Inspector (VMI) from IMST is a new application for the HTC VIVE virtual reality system. It allows the user to move freely through scaled version of electromagnetic (EM) structures, providing a fascinating experience of inspecting the structure’s geometry from all perspectives. This enables an unprecedented layout check and design verification of simulation models, a crucial step before going into production. In addition to the geometry, the VMI also visualizes the 3D simulation results, e.g., EM fields in different planes. The VMI will be offered as an add-on module for the 3D EM solver EMPIRE XPU 7.7. Every simulation model in EMPIRE can be experienced virtually with the VMI software.

This fast and highly efficient simulation technique combined with the VMI enables design cycles
to be accelerated, particularly for challenging applications like 5G and 77 GHz automotive radar.