We use cookies to provide you with a better experience. By continuing to browse the site you are agreeing to our use of cookies in accordance with our Privacy Policy.
Home » 3D EM Solver
Software/EDA Channel 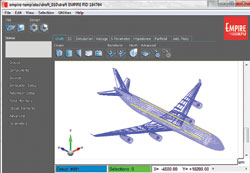 EMPIRE XPU is a 3D EM solver, based on the Finite Difference Time Domain (FDTD) method and is a powerful tool for modeling antennas, microwave circuits, EM chip design and more. Due to its on-the-fly compilation it is highly efficient and extremely fast on plain conventional hardware using optimized algorithms.

With the release of EMPIRE XPU 7.00, the solver has been upgraded to meet the ever changing and challenging needs of the RF-engineers and antenna designers of tomorrow. The main new feature is a powerful and intuitive 3D Graphical User Interface (GUI) that makes the drawing, placement and import of arbitrary 3D shapes sweat free and efficient.

Near field data from measurements or 3D field simulations can be used as a source. This makes it possible to simulate high-detailed antennas and other sources in large environments without the need to model all details of the original sources. For low frequency applications such as wireless power transfer, the evaluation of averaged electric fields induced inside human bodies as required by the ICNIRP standard, has been implemented.

Also, a new circuit simulator has been added to allow, for instance, the import of touchstone data from transistor measurements for amplifier design or the tuning of matching circuits for antennas without the need to switch to external tools. Icons and menus have been adapted for a more intuitive workflow and hyperlinks referring to dedicated manual sections have been added for fast troubleshooting. 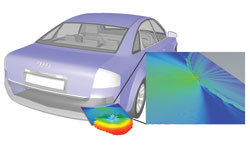 The following three examples illustrate the flexibility and adaptability of the EMPIRE XPU 7.00.

Car antennas for AM & FM radio and DAB are often integrated into the windscreen. The modeling of these antennas is usually difficult due to the conformal shape of the glass. A new layout mapping module in EMPIRE allows the automatic mapping of complete planar layouts on arbitrary surfaces. So windscreen antennas can be designed easily with full parametric control and direct layout export options for manufacturing.

Modern cars include more and more radar sensors to increase safety. They determine distance, speed and direction of moving or stationary objects, including people. Designing antennas for such systems is quite challenging. These radar systems are currently operated at 24 and 77 GHz. They are usually integrated behind the bumper of the car, which normally impacts strongly on the antenna performance. Accurate 3D EM simulations of the antennas including the car environment are a must for a short product development cycle. Due to the memory and speed efficient XPU algorithm of EMPIRE, even 77 GHz antenna systems can be simulated including the complete car environment (see Figure 1).

These simulations can be performed even more efficiently in the latest release by using a new field source definition. This field source can replace the antenna by using accurate field data from measurements or previous antenna simulations. By using a local field interpolation, it is possible to model the source with a coarser mesh in the subsequent simulation run including the whole environment, thus reducing the overall required memory and increasing the simulation speed. 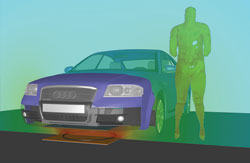 As electric vehicles are becoming more and more popular, the use of wireless battery charging systems will increase. This technology transmits electrical power by using magnetic resonances that result from changes in magnetic field intensity between a coil positioned on/in the ground below the car, and a receiving coil built into the chassis of the vehicle.

As the charging time should be minimal, high magnetic fields are used. This makes it mandatory to investigate the electromagnetic exposure on human bodies in the vicinity of wireless charging systems, which operate at around 90 kHz.

The recent ICNIRP standard requires the evaluation of the averaged electric field induced inside the body and its distribution in body tissues. EMPIRE can calculate these fields inside the human body either by modeling the complete wireless charging system and the environment (see Figure 2) or by using a field source, based on measured data, which excites the same field. In addition to a reduced problem size, using a field source based on measured data has the advantage that complete wireless charging system details need not be known.

For amplifier designers the design of matching networks is a crucial part of daily work. The usual workflow requires the simulation of the passive structure in a 3D field solver, the utilization of measured data for active or nonlinear devices and merging the result into a circuit simulator for tuning the matching elements.

The new Empire software includes a circuit simulator. Inside the GUI, schematic circuit elements are available such as lumped resistors, capacitors, inductors, as well as couplers, lines and Touchstone files. These elements can be placed between the ports and connected with ideal wires. The simulator computes the complete scattering matrix and the circuit simulation is automatically carried out after the 3D EM simulation is finished.

This allows fast tuning of the complete amplifier design while profiting from the accuracy of the 3D full wave simulation. A combined EM and circuit model of a 24 GHz power amplifier design is shown in Figure 3.

The new Empire XPU 7.00 includes a whole range of new powerful features that will accelerate and simplify the design workflow. Emphasis has been placed on user friendliness as well as enhanced functionality for today’s and tomorrow’s design challenges. EMPIRE guarantees fast and accurate 3D EM and thermal simulations of complex RF-systems and modules using off-the-shelf PC-equipment. With this tool the time-to-market can be reduced to a bare minimum. Because of the high accuracy of the simulation results, prototype cycles are considerably shortened and hence development costs are reduced as well.