We use cookies to provide you with a better experience. By continuing to browse the site you are agreeing to our use of cookies in accordance with our Privacy Policy.
×
Stay Connected :
Home » 5G Opens Up mmWave Spectrum: Which Frequencies Will Be Adopted?
4G/5G/Cellular

5G Opens Up mmWave Spectrum: Which Frequencies Will Be Adopted? 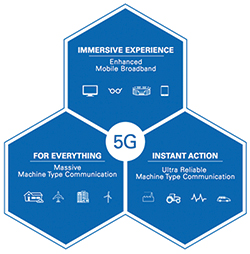 As the world’s standardization bodies move to define the next generation of wireless networks, the goals and objectives for 5G are forcing researchers to change the way they think. Increasing the spectral efficiency of a 4G-based network is not enough to deliver the step function in data rates, latency and capacity necessary for the three high level 5G use cases defined by 3GPP (see Figure 1) to provide ubiquitous, instantaneous mobile broadband data.

The enhanced mobile broadband (eMBB) use case, as defined by the IMT 2020, envisions peak data rates exceeding 10 Gbps, which is 100× faster than 4G. Data rates are empirically linked to available spectrum, according to the Shannon-Hartley theorem, which states that capacity is a function of bandwidth (i.e., spectrum) and channel noise. With spectrum below 6 GHz fully allocated, spectrum above 6 GHz — specifically in the millimeter (mmWave) range — presents an attractive alternative to address the eMBB use case. But at what mmWave frequency?

The International Telecommunication Union (ITU) and 3GPP have aligned on a plan for two phases of research for 5G standards. The first defines research for frequencies under 40 GHz, to address the urgent subset of commercial needs by September 2018. The second phase, slated to begin in 2018 and end in December 2019, addresses the key performance indicators outlined by the IMT 2020. This second phase focuses on frequencies over 40 GHz. 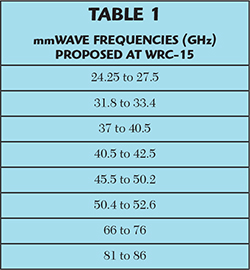 To globally align the standardization of mmWave frequencies, ITU released a list of proposed globally viable frequencies between 24 and 86 GHz at the World Radiocommunications Conference last November (WRC-15), shown in Table 1. Shortly after the ITU proposal, on October 21, 2015, the Federal Communications Commission (FCC) in the United States issued a Notice of Proposed Rule Making (NPRM) that recommended new flexible service rules among the 28, 37, 39 and the 64 to 71 GHz bands (see Figure 2).

While the ITU, 3GPP and other standards bodies decided on 2020 as the deadline for the 5G standard to be defined, cellular providers are working on an accelerated schedule for delivering 5G service. In the U.S., Verizon and AT&T plan to test an early version of 5G in 2017. Korea will conduct 5G trials at the 2018 Olympics, and Japan wants to demonstrate 5G technologies at the 2020 Tokyo Olympics. Through these varying groups and motivations, the following frequencies are emerging as the initial candidates for 5G: 28, 39 and 73 GHz.

These three frequency bands have emerged for several reasons. First, unlike 60 GHz, which has approximately 20 dB/km loss due to oxygen absorption, they have much lower oxygen absorption rates. This makes them more viable for long distance communications. These frequencies also function well in multipath environments and can be used for non-line-of-sight (NLoS) communications. By combining highly directional antennas with beam forming and beam tracking, mmWaves can provide a reliable and very secure link. Ted Rappaport and his students at NYU Polytechnic School of Engineering have already begun research on the channel properties and potential performance for 28, 39 and 73 GHz. They have published several papers with propagation measurements and studies on potential service outages at these frequencies. This data and research, combined with the availability of spectrum worldwide, make these three bands the starting point for mmWave prototyping.

Figure 2 mmWave bands proposed by the FCC for mobile use.

Service providers, eager to access the extensive unallocated mmWave spectrum, are the key influencers for the frequencies to be used. In Japan, NTT DOCOMO partnered with Nokia, Samsung, Ericsson, Huawei and Fujitsu to do its own field trials at 28 GHz as well as with other frequencies. In February 2015, Samsung performed its own channel measurements and showed that 28 GHz is viable for cellular communications. These measurements validated the expected path loss for urban environments: The path loss exponent is 3.53 in NLoS links. Samsung claims this data suggests a mmWave communications link can be supported for greater than 200 m. Researching phased array antennas, Samsung has begun characterizing designs that could fit phased arrays inside cell phones.

In September 2015, Verizon announced that it will conduct field trials in the U.S. with key partners, including Samsung, in 2016. In November 2015, Qualcomm conducted experiments at 28 GHz with 128 antennas to demonstrate mmWave technology in a dense urban environment. It showed how directional beam forming can be used for NLoS communications. With the FCC announcement that the 28 GHz spectrum can be used for mobile communications, further experiments and field trials in the U.S. are expected. Verizon has also completed an agreement with XO Communications to lease 28 GHz spectrum, with the option to purchase it by the end of 2018.

Note, however, that the 28 GHz band is not included in the ITU’s list of globally viable frequencies. Whether it will be the long-term frequency option for 5G mmWave applications still must be determined. The spectrum availability in the U.S., Korea and Japan, along with U.S. service provider commitments to early field trials, could push 28 GHz into U.S. mobile technology regardless of the global standards. Korea’s desire to show 5G technology at the 2018 Olympics might also push 28 GHz into consumer products before the standards bodies finalize the 5G standards. The fact that this frequency was not on the International Mobile Telecommunications (IMT) spectrum list did not go unnoticed and has drawn attention from the FCC.

Though the possible wide adoption of 28 GHz for 5G may not be seen for a while, if at all, it is clearly important right now. Mobile communications in the last several years has also focused on 73 GHz (in E-Band). Nokia used the channel measurements at 73 GHz performed by NYU to begin its research at this frequency. In 2014, at NI’s annual user conference (NIWeek), Nokia used NI prototyping hardware to demonstrate the first over-the-air link operating at 73 GHz. The company continued to evolve the prototype with public demonstrations to display new achievements. By Mobile World Congress (MWC) 2015, the prototyping system was capable of over 2 Gbps data throughput using a lens antenna and beam tracking. Nokia showcased a MIMO version of this system operating at over 10 Gbps at the Brooklyn 5G Summit in 2015; less than a year later, at MWC 2016, the company demonstrated a two-way over-the-air link achieving over 14 Gbps. Nokia was not the only company with a 73 GHz demo at MWC 2016. Huawei presented a prototype with Deutsche Telekom operating at 73 GHz. This demo, using multi-user MIMO, displayed high spectrum efficiency and the potential for more than 20 Gbps throughput for individual users.

More 73 GHz research is anticipated in the coming years. One of the defining characteristics of this frequency, that sets it apart from 28 GHz and 39 GHz, is greater than 2 GHz contiguous bandwidth, which is the widest of the proposed frequency spectra. By comparison, 28 GHz has 850 MHz of bandwidth, and the two bands around 39 GHz have 1.6 GHz and 1.4 GHz in the U.S. As previously mentioned, more bandwidth equates to more data throughput, which gives 73 GHz a big advantage over 28 and 39 GHz.

The 39 GHz bands are under investigation, but significant public support and research have not materialized. Nonetheless, this band features some characteristics that may make it a compromise for wider adoption. The FCC has proposed 39 GHz for potential mobile use. Verizon, while focusing on 28 GHz for its initial field trials in 2017, has access to 39 GHz via its business relationship with XO Communications, which owns substantial 39 GHz licenses. Still, public support and acknowledgment of 28 GHz and 73 GHz research are more visible than that for other frequencies.

To capitalize on the promise of mmWave for 5G, researchers must develop new technologies, algorithms and communications protocols. The fundamental properties of the mmWave channel are different from current cellular models and are relatively unknown. The importance of building mmWave prototypes cannot be overstated, especially in this early timeframe. Building system prototypes demonstrates the viability and feasibility of a technology or concept in a way that simulation alone cannot (see Figure 3). mmWave prototypes communicating in real time, over the air, in a variety of scenarios will unlock the secrets of the mmWave channel and enable innovation, technology adoption and proliferation.

mmWave for mobile access faces challenges, including the availability of commercial off-the-shelf silicon and analog components, as well as other elemental building blocks for developing systems. This hinders commercialization. Consider a baseband subsystem capable of processing a multi-gigahertz signal. Today’s LTE implementations typically use 10 MHz channels (20 MHz maximum), and the computation load increases linearly with bandwidth. So the computational capacity must increase by 100× or more to address 5G data rate requirements. To conduct mmWave system physical layer computations for infrastructure, FPGAs are an essential technology to develop real-time prototypes. After all, the motivation for moving to mmWave is the large contiguous bandwidth.

In addition to FPGA boards, a mmWave prototyping system needs state-of-the-art DACs and ADCs to capture up to 2 GHz of contiguous bandwidth. Some RFICs on the market today include chips that convert between baseband and mmWave frequencies, but these options are limited and mostly cover the unlicensed 60 GHz band. Engineers can use IF and RF stages as alternatives to RFICs. Once they develop baseband and IF solutions, engineers have a few more vendor-provided options for mmWave radio heads than they do for baseband RFICs, but not many. Developing a mmWave radio head requires RF and microwave design expertise. This is an entirely different skill than developing FPGA boards, so pulling together all of the necessary hardware requires a team with diverse experience. FPGAs must be considered core components in a mmWave baseband prototyping system, and programming a multi-FPGA system capable of processing multi-gigahertz channels increases system complexity.

Though the future of 5G is not yet clear, mmWave will surely be one of the technologies used to define it. The large amount of contiguous bandwidth available above 24 GHz is needed to meet data throughput requirements, and researchers have already used prototypes to show that mmWave technology can deliver data rates above 14 Gbps. While questions remain around the global spectrum allocation, the U.S. is moving directly and decisively toward 28, 37 and 39 GHz.

Telecoms Industry Obsesses with mmWave, But 3.5 GHz Will be the Killer 5G Band