We use cookies to provide you with a better experience. By continuing to browse the site you are agreeing to our use of cookies in accordance with our Privacy Policy.
×
Home » mmWave Will Be The Critical 5G Link

Over the past 30 years, the mobile network has become a critical part of life, and the use of mobile services is starting to reach incredible levels of demand. This year, 30 Exabytes will fly over worldwide mobile networks every month. And the demand will continue to rocket upward by roughly 50 percent each year. About 15 percent of adults in the U.S. use LTE full-time, leaving Wi-Fi turned off (they say that managing Wi-Fi hotspots can be annoying). A whole generation of young people consumes 50 GB of mobile video each month, relying on “unlimited plans.” The signs are clear that data demand will continue to grow rapidly. 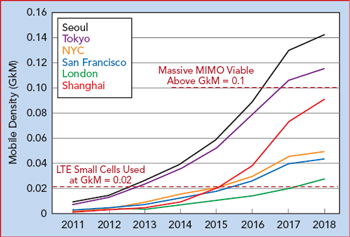 Mobile Experts tracks the demand for mobile data with multiple mobile operators worldwide and their Traffic Density tracking metric measures the level of traffic in a busy sector, during busy hours, in terms of Gigabits per second, per square kilometer, per MHz of spectrum (GkM). In order to understand how advanced networks should handle extreme demand in some cities, the GkM is compared between different operators, and an assessment can be made whether small cells, massive MIMO or mmWaves will be necessary to accommodate the traffic (see Figure 1).

Traffic density in GkM has been rising steadily for years, and is most pronounced in locations such as subway stations in Tokyo and Seoul, where thousands of people stand close together, all watching video. The statistical rise in density has been remarkably smooth as new apps and video content become available on mobile platforms.

Above a traffic density level of 0.02 GkM, small cells were observed to be universally adopted by mobile operators. In other words, the macro network saturated above 0.02 GkM, and small cells became a more economical way to add capacity. More recently, networks have reached levels of density above 0.1 GkM, making massive MIMO necessary to continue increasing capacity.

We are now starting to see some signs that density levels in the range of 0.15 to 0.2 GkM will saturate the OFDM network. There will be ways to push through this barrier as well, but moving beyond 0.2 GkM in the 1 to 3 GHz bands will get very expensive, requiring large numbers of very low-power radio nodes. 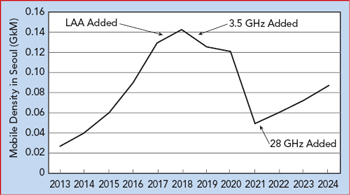 Figure 2 Changes in traffic density with addition of 5G spectrum.

Adding 5G spectrum to the mobile network can actually reduce the traffic density. As an example, one of the leading Korean networks should experience a drop in GkM with their recent introduction of 100 MHz at 3.5 GHz. An additional 800 MHz of spectrum at 28 GHz will reduce their traffic density in key hotspots to much more manageable levels as shown in Figure 2.

Therefore in many ways the operators can be viewed as using 5G spectrum to manage the density of their traffic. When high density makes adding capacity expensive, adding more spectrum is the best option.

mmWaves to the Rescue

After the convenient licensed bands below 5 GHz are used up, mobile operators start to look to mmWave spectrum as an opportunity to get significant bandwidth. The U.S. is a prime example where wide blocks of C-Band spectrum are not available so mobile operators have invested heavily in 28 and 39 GHz mmWave bands. 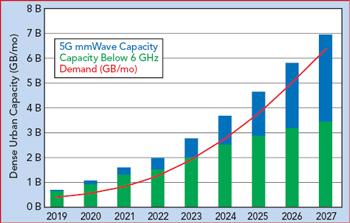 In fact, the large U.S. mobile networks, in key urban pockets, are running out of capacity below 6 GHz. During special events such as the Super Bowl, the traffic density is in the range of 0.12 GkM and above in the U.S. Mobile Experts modeled the demand for mobile data in four segments of the U.S. network (dense urban, urban, suburban and rural) and estimated the total capacity of the mobile network including macro base stations, small cells, CBRS, LAA and the impact of massive MIMO below 6 GHz. Even with a fully utilized heterogeneous network with maximal capacity, demand in dense urban pockets will exceed capacity in 2023 as shown in Figure 3. Note that the numbers shown in the Figure 3 represent the total demand and capacity for all dense urban sites in the U.S., so the extreme high-density locations such as Times Square will experience demand higher than capacity in the 2021 to 2022 timeframe. Extrapolating the trends in traffic density benchmarks, the dense urban sites in New York City should reach daily peak-hour density levels in the range of 0.1 GkM or higher by 2022.

How mmwave Links can be Useful

Many experienced RF engineers have reasonable doubts about using mmWave radio links in a mobile environment. After all, the mmWave link depends on a narrow beam in order to achieve a reasonable link budget. Any clutter in the RF channel can disrupt the narrow beam.

Handovers in a mobile 5G mmWave network have been demonstrated in test systems in Seoul and at speeds above 200 km/hr on a racetrack, so the 5G frame structure lends itself to handovers in extreme Doppler shift conditions.

However, the mobile operators will not be using the 5G mmWave link as a standalone (SA) radio channel initially. Instead, an LTE carrier at 1 to 2 GHz will be used as the primary link, with control signaling taking place on the more reliable lower band. Then, the mmWave link will come into play when it is available to download or upload large amounts of data. In this way, the mmWave radio will add throughput as a carrier aggregation layer, boosting speed when it is available but not essential to the continuity of the link for handovers. At some point, operators may decide to use 5G mmWave as a SA mobile network, but today none of the active operators are planning to operate 5G mmWave independently.

The mmWave base station will look dramatically different than LTE base stations below 6 GHz. At a fundamental level, the mmWave radio suffers from the lower power amplifier efficiency in the 24 to 40 GHz bands, so the level of conducted output power will be much lower than lower frequency mobile radios. The primary limitation is the level of heat dissipation possible in a passively cooled radio unit at the towertop. Given a limit of about 250 W of heat in a small enclosure, the conducted RF power will be very low, below 10 W in any configuration.

As a result, systems engineers have turned to massive MIMO architectures with at least 64 antennas, in order to use high antenna gain. Initial products have utilized between 64 and 256 antenna elements per beam, to achieve between 25 and 30 dBi of antenna gain. In this way, the low conducted power can achieve linear EIRP in the range of 60 dBm. Each beam also carries multiple streams. Massive MIMO base stations are configured with dual-polarized antenna arrays, so that each beam can operate with 2x2 MIMO.

Multiple beams can be supported from a radio unit by constructing the array with multiple panels. From a manufacturing point of view, OEMs are settling into the use of panels with a set number of elements (examples range from 64 to 256 elements per panel). Then, the product can be scaled up and down to support different levels of capacity. One example in the field now uses four 256-element panels for a total of 1024 antenna elements, supporting four beams and 2x2 MIMO in each beam.