We use cookies to provide you with a better experience. By continuing to browse the site you are agreeing to our use of cookies in accordance with our Privacy Policy.
×
Stay Connected :
Home » Authors » Crane Aerospace and Electronics, West Caldwell, N.J.

Crane Aerospace & Electronics announced the introduction of a space grade DC-DC converter family. The SMHF42 is a family of fully isolated, 15 W products with a range of single and dual outputs, operating over an input voltage range of 35 to 55 volts with 80 volt transient protection. They are available in Class H and Class K versions (per MIL-PRF 38534) with radiation tolerance of L (50 krad(Si)) and R (100 krad(Si)). 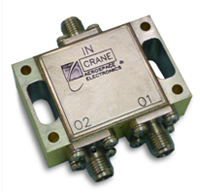 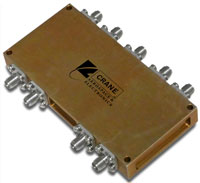 Crane Aerospace & Electronics Microwave Solutions continues to expand the Ku-Band Iso-Divider product family with the introduction of an 8-way unit. Featuring similar qualities as the previously introduced 4- and 2-way products, exceptional insertion loss and band flatness performance is continued in this product. The Iso-Divider combines the functions of high performance power dividers with ferrite isolators.

Crane Aerospace & Electronics introduces its Interpoint® MFX Series™ 50 W DC-DC converter. The newly designed MFX Series provides up to 50 W in a 0.92 cubic inch case with efficiency over 90%. The input voltage of 16 to 50 volts can also withstand transients of 80 volts for one second, has ±10% trimmable 3.3 and 5 volt outputs and operates at -55°C to +125°C.