We use cookies to provide you with a better experience. By continuing to browse the site you are agreeing to our use of cookies in accordance with our Privacy Policy.
×
Home » A Dive Into Integrated PA Topologies for 5G mMIMO
4G/5G/Cellular

A Dive Into Integrated PA Topologies for 5G mMIMO

Figure 4: Different Doherty output networks to delivery 8 ohm at Zopt,c and Zopt,p at a center frequency of 1.85 GHz. The network with an unmated Q (left) requires the use of a quarter-wave transformer with a high ITR, narrowing the bandwidth. The matched Q network (right) expands bandwidth with the addition of an offset line [5].  Image Link

has a similar frequency characteristic to that of a half-wavelength line that acts as an open stub at the center frequency, is inductive at lower frequencies, and capacitive at high frequencies. Moreover, the impedance of the peaking amplifier at saturation

Figure 5: Simulated results (5a) of the impedance looking into the peaking amplifier from the power combinating node at saturation

In implementing this topology, the bonding wires connecting the peaking FET and the circuit are included in the value of Lp1 while series bonding wires from the carrier FET is included in the output matching network with Lc1, Lc2 while the offset line is formed by the transmission line TLc1 (Figure 5b). This leads to a 10mm by 6mm package (after molding) that is implemented on a multilayer epoxy substrate. Final drain efficiencies stand at 53.7% and PAE at 44.8%, both at 8 dB backoff, while the peak output power is 45.3 dBm, and gain is 28 dB (at 8 dB backoff).

Output Network
In a lumped LCL quarter-wave topology (Figure 6 (left)), the output capacitance of both amplifiers is resonated out using a shunt inductor. The impedance of the peaking amplifier is inherently high because of this resonance, eliminating the need for an additional offset line. And, instead of using a quarter-wave transmission line, a high-pass LCL circuit is used to perform the same function. This, however, can be simplified by merging the shunt inductors with its adjacent shunt components (Figure 6 (right)). And, because of the large load impedance of the GaN HEMT, the output load impedance can more readily achieve

Figure 6: A ℼ-type low-pass and high-pass circuit (left) is used to replace the quarter-wave transmission line in conventional DPAs, saving on space. This can be further optimized by merging in shunt inductive components (Lp and LT) into a singular inductor (L’T) (right)[3].  Image Link
Input Network: 2nd Harmonic Control Circuit
Several iterations utilizing a lumped LCL quarter-wave topology for the output circuit attempt to mitigate the need for the DPD circuit and maximize linearity by instead cancelling the IM3s of the carrier and peaking amplifiers at the output combining point [6]. A high efficiency (up to 70%) can be accomplished by matching the harmonics to the optimum impedances. In some versions, second harmonic input control circuits are realized through a parallel LC network that experiences resonance (open circuit) at the fundamental frequency. This LC network and the bond-wire exhibits capacitive impedance at the second harmonic frequency generates a series resonance for a short-circuit at the second harmonic frequency [3]. Achieving this second harmonic impedance around the short point can improve drain efficiency considerably (Figure 7). A tunable capacitor can also be used at the input of the carrier amplifier for multi-band operation. This way, the capacitor can be tuned IM3 performance can be optimized for dual-band capability [7]. 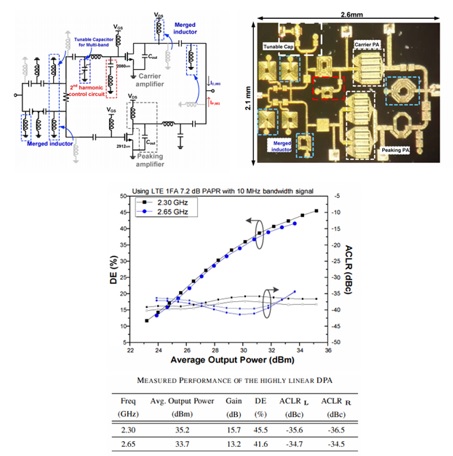 Figure 7: 2nd harmonic control circuit used at the input of a lumped LCL quarter-wave DPA topology. Large drain efficiencies and gain of over

In some lumped LCL topologies, both the input and output include harmonic control circuitry to match the harmonics of the output impedance for the carrier and peaking amplifiers with the optimum impedances for drain efficiency [7].

There are some general conclusions that can be gleaned from the previous topologies aiming for an integrated DPA approach. They are as follows:

With all of these considerations there is a general challenge of integrating the phase compensation network, input matching and output harmonic control circuit together on the input side of the DPA. On the output side, combining the output matching network for proper load modulation as well as replacing the offset lines and quarter-wave transformer with discrete inductors and capacitors for comparable wideband performance is the design challenge. 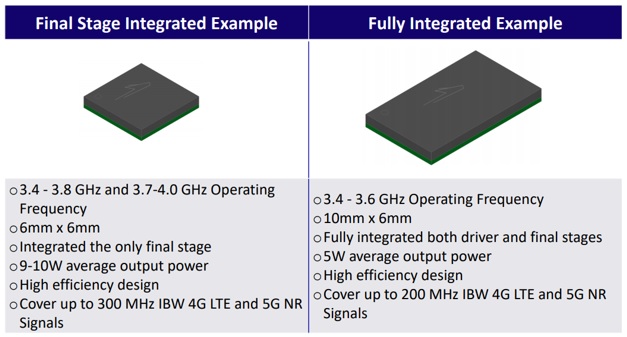 Figure 9: ACLR plot for Wolfspeed final stage integrated PA with DPD linearization of 5C, 20 MHz LTE signal with 100 MHz IBW (left) and 10C, 20 MHz LTE signal with 200 MHz IBW (right).  Image Link
Fully Integrated PA Performance with DPD Linearization
The fully integrated PA tested with a 10C, 20 MHz LTE signal (200 MHz IBW) and a PAPR of 8 dB at a 3.5 GHz center frequency yields an ACLR of -49.9 dBc to -50.3 dBc. An average output power of 37.5 dBm with a high efficiency as well (Figure 10). In other words, it is possible to accomplish an integrated DPA with the input and output driver stages as well as the input and output DPA stages within a small form factor to better fit the needs of 5G mMIMO. Moreover, with the right design and optimization, this can be done under a wide bandwidth signal with up to 300 MHz IBW. 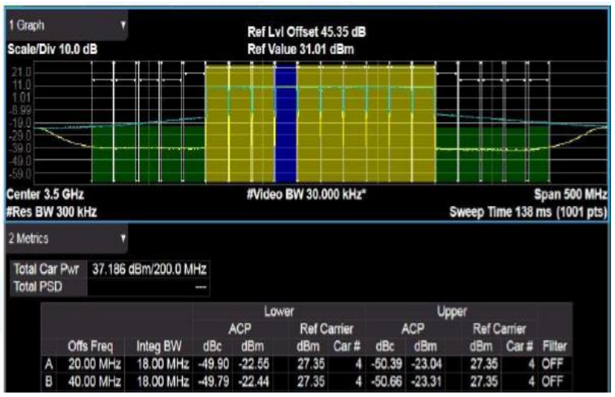 The various 5G infrastructure trends have led to tighter design tolerances with advanced radio techniques, higher performance requirements, tighter restrictions, and more integration. There is a general call for a higher degree of modularity, PAs for mMIMO are no exception to this trend, where PAs are expected to achieve both a high linearity and efficiency all within a small form factor. This leads to the need for an integrated DPA where a number of design challenges crop up when both minimizing and combining the input and output circuits of the carrier and peaking amplifiers while achieving broadband performance. The GaN HEMT using the GaN on SiC is a promising candidate for the integrated DPA with several advantages including a wide bandwidth performance and the ability to achieve higher efficiencies than other technologies. Wolfspeed 5G mMIMO GaN on SiC integrated PAs show high linearity and efficiency under wide bandwidth signals ― all within a small form factor.