We use cookies to provide you with a better experience. By continuing to browse the site you are agreeing to our use of cookies in accordance with our Privacy Policy.
×
Home » Breaking Down mmWave Barriers with Holographic Beam Forming®
4G/5G/Cellular Editor’s Note: As 5G mmWave applications are being implemented, the issues of propagation distance and blocking have limited the success of initial deployments. However, new array beam forming technologies have been developed to help overcome these limitations by enabling higher power/gain, higher efficiency and improved scanning angles. Our cover feature introduces two array beam forming technologies that promise to improve mmWave systems: the first is Holographic Beam Forming from Pivotal Commware, and the other is dielectric resonator antenna technology from Antenna Company. So stay tuned as we address semiconductor technology improvements for 5G mmWave applications in our April issue.

mmWave wireless services have been traditionally used in short range wireless transport applications such as fronthaul/backhaul, point-to-point links and SATCOM. 5G in the U.S. will push the role of mmWave beyond simple transport to become a capacity layer for fixed wireless access (FWA) and enhanced mobile broadband (eMBB). Taking mmWave from its fixed beam roots to a dynamic, reconfigurable access layer will depend critically on beam forming techniques to assure link margins without requiring massive capital outlays. 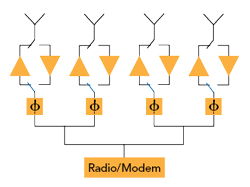 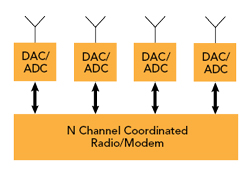 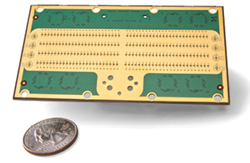 Beam forming uses planar antenna arrays with typical antenna gain ranging from 17 dB (4 square wavelength arrays) to 29 dB (64 square wavelengths). Phased arrays are a classic architecture used for beam forming. A canonical 4-element time division duplexed (TDD) phased array is shown schematically in Figure 1. In such an array, the antenna elements are spaced roughly one-half wavelength apart and every element is backed by a module consisting of a transmit power amplifier (PA), receive low noise amplifier (LNA), phase shifter and switches to swap between the transmit and receive modes. These elements are typically packaged as 4-element modules on a single chip. This distributed architecture is notoriously expensive and power hungry but is well understood by antenna engineers and industry and has been the standard for analog beam forming for decades. At mmWave, phased arrays have seen heavy usage in defense and satellite applications but have not seen widespread use in commercial terrestrial applications.

Phased array beam forming is both named for and enabled by a phase shifter behind every element. In transmission mode, the radio signal is distributed through a corporate feed network, providing the same phase shift to every element in the array. Phase shifters at each element then impart the appropriate delay in carrier phase to cause constructive interference of the radiated fields in desired direction while also causing destructive interference in others. The finite nature of the antenna aperture (radiating area of the antenna surface) gives rise to sidelobes or unavoidable radiation in undesired directions. Sidelobes are usually 13.4 dB or more below the beam peak. Receiving from the antenna array is the reverse of transmission, with the PA and LNA chains swapping for receive mode while the phase shifters align the received signals from the desired direction to constructively add while destructively combining the other directions. In both transmit and receive, the antenna radiation pattern is well defined and is typically measured in anechoic chambers.

Massive Multiuser MIMO (MU-MIMO) is a newer technique, shown in Figure 2, that replaces analog phase shifters with direct digital conversion of the analog waveform. At low frequencies (sub-3 GHz) high resolution digital to analog (DAC) and analog to digital converters (ADC) are used to directly create the radio waveform with the appropriate phase shift. More interestingly, different phase shifts can be imparted on a per-carrier basis and create beams carrying different information for the same sub-carrier. Receiving is similar with the received waveform being digitized at each antenna element. The digital bus-work connects each element to a coordinated radio/baseband system which post-processes the signals into their respective digital streams.

In practice, direct DAC in MIMO is rarely done at mmWave. RF up/down conversion is used to reduce sampling requirements to those of baseband signals. Even so, the DAC/ADC and RF conversion pairs are even more expensive and power hungry than a phased array. For traditional cellular this may prove acceptable as base station densities are modest. At mmWave, deployed densities are expected to be much higher due to the shorter link distances at mmWave rendering MU-MIMO unsuitable for real deployments.

HBF is a new technique derived from metamaterial concepts. Functionally, HBF is an analog beamformer with performance equivalent to analog phased arrays. As with other planar arrays, the antenna area dictates the achievable beamwidth and maximum realized gain. The HBF technique uses one RF chain that feeds all the elements in the array through a single RF port. Rather than a corporate feed as in phased arrays or digital network in MIMO, HBF uses a series feed that distributes the RF signal along multiple individual antenna elements. Slots, patches, dipoles and other small antenna types have all been shown to work with the HBF technique as radiating elements. A varactor tuned feed coupler transfers energy from the distribution network into the antenna element and this is shown schematically in Figure 3. As shown, each element sees a different progressive phase shift from the feed point. Beam forming is accomplished by using the capacitance shift in the varactor to vary the coupling to selected elements with the proper phase alignment needed to point the beam in the desired direction.

HBF is named for its similarity to conventional optical holography. In optical holography, an external source excites the hologram surface which converts the excitation into an output wave our eyes perceive as an image. In HBF, the radio is the source excitation and the beam is the output wave. The pattern of element coupling converting the guided excitation into a free space wave is exactly a hologram. As a passive system, the technique is fully reciprocal with reception and transmission using the same hologram. No switching at the antenna level is required. All the amplifiers and baseband components can remain within the radio unit.

Figure 4 shows a typical HBF implemented in a multilayer printed circuit board at 39 GHz. The holographic technique uses a denser lattice than half wavelength along one dimension. As suggested from the schematic view of Figure 3, many of the elements will have the wrong phase for the desired beamshape and are turned off. In order to avoid the efficiency penalty for having significant portions of the array in the “off” state, the elements are packed at more than double the density of a traditional array to allow uniform aperture excitation and efficient beam forming. The element miniaturization along one axis has an additional benefit in that it widens the scanning volume to nearly ±80 degrees with less than 10 dB loss from antenna broadside.

A high-level cellular network architecture is shown in Figure 5. Perhaps the most challenging link in the above architecture is the radio access network (RAN) link. Front-haul, backhaul and other transport is generally expected to use fiber as the physical medium. RAN, by its nature, requires wireless connectivity. In the context of 5G, the RAN link can be decomposed into the following node types:

These node types all have mmWave capability. The mmWave requirements differ among node types which drives different architecture decisions for practical implementation of 5G equipment.

A mmWave gNB must comply with requirements standardized by 3GPP, the primary cellular RAN standards development organization. In practical terms, mmWave gNBs are driven to meet the following high-level requirements:

HBF is well-suited to mmWave gNB designs. Hybrid beam forming with HBF results in low RF and thermal complexity. Phased-array-based hybrid beamformers use monolithic modules to realize the required antenna gain, with each module generating heat due to the phase shifter and amplifier losses. This leads to a thermal design challenge with heat generated throughout the PCB. With HBF beamformers, there is a single RF PA per HBF from which to extract heat. This also allows for digital pre-distortion (DPD), which enhances efficiency and reduces power consumption. HBF also lends itself to rapid beam-switching implementations, without any RF gain or phase adjustment required at fast time scales.