We use cookies to provide you with a better experience. By continuing to browse the site you are agreeing to our use of cookies in accordance with our Privacy Policy.
×
Home » The Spanish Microwave Industry: Specialists in Space, Defense & Telecoms
Aerospace and Defense Channel European Industry News

For many of us in the wireless and microwave community, the mention of Spain initially brings to mind Mobile World Congress (MWC), the huge trade show in Barcelona that attracts around 100,000 visitors each February. However, Spain has had a thriving RF and microwave industry of its own since well before MWC relocated there over a decade ago, and it is currently growing rapidly. The country’s particular strengths include aerospace, defense and antennas, as well as telecoms, and this article will highlight just a few of Spain’s companies and institutions, along with the developments they are contributing to the European microwave community. 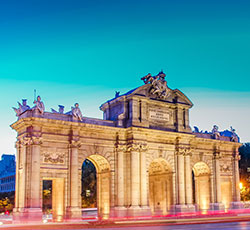 It has been 25 years since the European Microwave Conference (EuMC)—then a much smaller event than the present, multi-conference European Microwave Week (EuMW)—last took place in Madrid in 1993, and as the conference returns there, we reflect on some of the changes Spain’s market has seen in the intervening years. Figure 1 shows the Puerta de Alcalá in Madrid, one of dozens of stunning historical monuments and buildings in Spain’s capital city that people can visit while attending the conference.

Possibly the company name most familiar to the wireless industry is Telefónica, the Spanish-headquartered, multinational telecoms operator that is parent to the O2 and Movistar brands in Europe and Latin America. In addition to its mobile networks, Telefónica has operations in satellite media distribution in Spain and Latin America, and also a chain of R&D centers located around the world.

Telefónica announced in January this year that it is progressing well along the path to 5G with early deployments in two Spanish cities—Segovia and Talavera de la Reina—in partnership with Nokia and Ericsson. Under the 5G Technological Cities project, these two cities will become “living laboratories” for developing the capabilities of 5G. The plan is to deploy the network over the next three years, increasing peak data speeds over mobile to 10 Gbps and reducing latency to less than 5 ms, while in parallel carrying out testing of new use cases. Initially the network will be non-standalone 5G NR, supported by the existing 4G network, but will eventually evolve to a standalone 5G network.

An open research and innovation laboratory called 5TONIC, located in Madrid, is a joint venture between Telefónica and Imdea Networks that aims to create an open environment where industrial and academic participants from around the world can work together on research projects related to 5G technologies.

Telefónica I+D, the research and development company of the Telefónica Group, also has a technology center in Madrid, as well as offices in Barcelona, Granada, Huesca and Valladolid in Spain and in other locations around the world. Its mission is to help improve the Group’s competitiveness and to keep up-to-date with technological innovation, as well as developing new products and services. Not surprisingly, its current projects include 5G and M2M developments, longer-term innovation programs on human behavior and mobility and on future networks as well.

Spain has long been an influential player in the defense and aerospace sector, with many Spanish companies being active contributors to various European Space Agency (ESA) programs. Madrid is home to three divisions of the aerospace giant Airbus, including Airbus Defense and Space (Airbus DS) that incorporates Airbus DS-CASA Espacio—formerly part of EADS-Astrium. This company specializes in antenna design for satellites, radiometers and radar.

Carlos Montesano, senior expert on antennas and head of R&D at Airbus DS, said, “Our satellite antenna developments are focused in two main areas, large reflector parabolic antennas and active arrays.” Montesano identified important trends in this field towards larger antennas with greater numbers of beams, which give more flexibility in arranging channel contracts with terrestrial operators. In active arrays, one of the company’s most important projects is the receive antenna for the Eutelsat Quantum1 satellite, billed as the first fully flexible telecom satellite. Eutelsat Quantum offers both Ku-Band channels for commercial use and X-Band channels for government applications. The active array architecture means that coverage, bandwidth, power, frequency and orbital slot are all reconfigurable in orbit, allowing Quantum to serve any region of the world and to adjust to new demands without needing to launch an entirely new satellite. 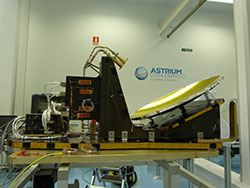 Airbus DS’s current radiometer programs in Madrid include the MWR nadir-looking sounder and the ICI mmWave instrument, which is being developed for the remote sensing of high altitude ice clouds. MWR, shown in Figure 2, operates at 23.8 and 36.5 GHz (K/Ka-Band), covering a bandwidth of 200 MHz in each channel and is designed to measure water vapor and cloud water contents in the field of view of the altimeter, in order to compensate for the propagation delay these cause in radar measurements. It does this by measuring the brightness temperature of the Earth’s radiation. These corrections can only be made over the ocean, where the background noise is stable and can be measured. Over ice and land surfaces, wet troposphere corrections based on global meteorological data and dedicated models are used instead.

Airbus DS-CASA Espacio was selected by ESA as the prime contractor for the ICI instrument, which is a total power sub- and mmWave conically scanning radiometer. It provides brightness temperature measurements in 11 heterodyne receiver channels, including two dual-polarization channels, ranging from 183 to 664 GHz. It is designed to monitor the exchange mechanisms in the Earth’s upper troposphere and lower stratosphere, focusing in particular on the remote sensing of high altitude ice clouds. Although this technique for measuring ice clouds was first proposed in 1995, this will be the first radiometer of its kind to have been developed for Earth observation from space. 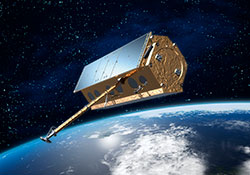 Figure 3 The PAZ satellite uses SAR to collect images day and night for both military and civilian applications.

Another recent Airbus project, PAZ—the radar satellite of the Spanish National Earth-Observation Program—was launched earlier this year by a SpaceX Falcon 9 rocket. The PAZ satellite, shown in Figure 3, was primarily intended to address civilian surveillance needs as well as to cover defense and security applications. “Paz” is the Spanish word for peace.

Using Synthetic Aperture Radar (SAR) imaging instead of a camera, the satellite is able to capture images with equal clarity by day and night under any meteorological conditions. Operating in the military X-Band spectrum, it can capture more than 100 images each day with up to 1 m resolution. During its five-and-a-half year mission, PAZ will cover an area of over 300,000 km2 per day from its slightly inclined quasi-polar orbit, covering the entire globe on average in 24 hours. Its diverse range of tasks include: terrestrial monitoring; high resolution cartography; border control; tactical international support; crisis management; risk analysis; evaluation of natural disasters; environmental control; marine environment analysis; and marine wildlife monitoring.

The RF/Microwave Industry in the UK and Ireland, Birthplace of Radar and the GaAs MMIC