We use cookies to provide you with a better experience. By continuing to browse the site you are agreeing to our use of cookies in accordance with our Privacy Policy.
Home » Oscilloscopes Capture Longer Time Periods
Test and Measurement Channel 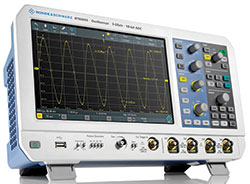 Engineers rely on oscilloscopes as a primary tool for testing and debugging electronic designs. Development teams need oscilloscopes that capture data over long time periods, have increased vertical resolution, incorporate increased functionality, are easy to operate and fit within constrained budgets. To address these needs, Rohde & Schwarz has introduced the R&S RTM3000 and R&S RTA4000 series of oscilloscopes, complementing the R&S RTB2000 series introduced in 2017. Models are available in bandwidths ranging from 100 MHz to 1 GHz.

Acquisition memory determines how much time an oscilloscope can capture. Typically oscilloscopes comparable to the R&S RTM3000 and R&S RTA4000 have an acquisition memory between 4 and 20 Msample; some do not offer segmented memory. For the design of the two new oscilloscopes, a different approach was taken to incorporate significantly more memory for capturing events that take longer, such as power-up and power-down sequences.

Segmented memory is a mode where the user partitions the acquisition memory into multiple segments. On each trigger event, the oscilloscope captures a certain amount of data around the trigger event. The R&S RTA4000 oscilloscope comes standard with 1 Gsample segmented memory, while the R&S RTM3000 models have a segmented option with 400 Msample memory. Segmented memory can be particularly useful for bursty signals, such as serial buses or RF communications, as no memory is used during periods of signal inactivity.

Both new oscilloscope series feature a low noise front-end that retains full oscilloscope bandwidth down to 1 mV/div sensitivity. The additional signal detail is useful for applications such as power electronics and power integrity measurements, where users need to see small signal changes.

Both instrument series feature a bright 10.1 in. capacitive touch screen display that facilitates quick and efficient operation. They are highly portable and offer a boot-up time of 10 s. Each model includes a LAN interface enabling users to simply type the oscilloscope’s IP address in a web browser to get screenshots, show the live scope display and control the front panel, with full standard commands for programmable instruments (SCPI) control from the browser.

The oscilloscopes incorporate the USB-based standard media transfer protocol, the same standard that allows mobile phones to connect to PCs. It enables users to easily retrieve the oscilloscope’s current display or export waveform data for post analysis (e.g., using Excel). The USB connection is located on the rear of the scope. 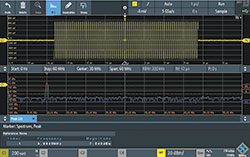 Figure 1 The oscilloscopes include an FFT, allowing time-correlated time and frequency domain measurements. 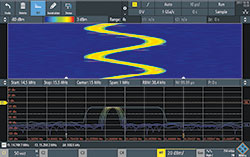 Not only are the oscilloscopes highly capable, users also have access to additional instrument functionality built into the products. There are: protocol triggering and decode options for I2C, SPI, UART, RS-232, LIN, CAN, MIL-STD 1553, ARINC 429 and I2S; an MSO option that adds 16 digital channels; a waveform generator for signal creation; a 4-bit pattern generator; power analysis; and a spectrogram option for viewing time-varying RF signals, such as signal hopping (see Figure 2).