We use cookies to provide you with a better experience. By continuing to browse the site you are agreeing to our use of cookies in accordance with our Privacy Policy.
×
Home » Stratobus project takes off
Aerospace and Defense Channel European Industry News Industry News 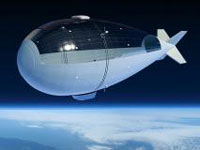 Thales Alenia Space announced the official kickoff of its Stratobus research and development project. Stratobus is an autonomous stratospheric airship that has recently been approved by the French government’s ‘investment in the future’ program, with funding of €17 million. These funds cover a 24-month development phase for key enabling technologies, culminating in the construction of a demonstrator.

Since the project has also won support from four different French regions, additional funding of about €3 million is expected. Thales Alenia Space is the lead company, and also in charge of systems integration, avionics, solar arrays and certification.

Stratobus will be positioned at an altitude of about 20 km (12 miles) over its theater of operations, in the lower layer of the stratosphere, which offers sufficient density to provide lift for the balloon. Winds at this altitude are moderate and stable throughout the entire zone between the tropics, at not more than 90 km/h (55 mph), allowing the airship to remain stationary by using its electric propulsion system. Stratobus will carry payloads to perform missions such as the surveillance of borders or high-value sites, on land or at sea (video surveillance of offshore platforms, etc.), security (the fight against terrorism, drug trafficking, etc.), environmental monitoring (forest fires, soil erosion, pollution, etc.) and telecommunications (Internet, 5G).

“The new market for high-altitude pseudo satellites, or HAPS, is estimated at one billion dollars from now to 2020, but is awaiting a product. With Stratobus offering a field of view of 500 kilometers, we’re convinced that it will win a large share of this market,” said Jean-Loic Galle, President and Chief Executive Officer of Thales Alenia Space.

Thales Alenia Space project manager Jean-Philippe Chessel added: “Stratobus is midway between a drone and a satellite, making a low-cost product offering permanent regional coverage and ideally complementing satellite solutions. Using only solar energy and green technologies, Stratobus has a very small carbon footprint – much smaller than that of a small private plane.”

Thales Alenia Space and partners plan to launch a demonstrator in 2018, followed by the first qualification and certification flights in 2020. A number of potential customers have already been identified. Market forecasts indicate a return on investment in less than three years following its commercialization.