We use cookies to provide you with a better experience. By continuing to browse the site you are agreeing to our use of cookies in accordance with our Privacy Policy.
×
Home » Eurofighter consortium and NETMA sign €1 billion contract
Aerospace and Defense Channel European Industry News Industry News

The European Eurofighter consortium, which produces the Typhoon fighter, and the NATO Eurofighter and Tornado Management Agency (NETMA) have signed a €1 billion contract to develop the electronically scanned Captor-E radar for the Typhoon. For Finmeccanica the contract will represent an order value of more than €400 million. 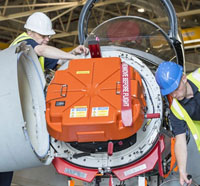 Finmeccanica, through its companies Selex ES and Alenia Aermacchi, will contribute to develop, produce and integrate the new radar which presents several operational advantages over the mechanical M-scan, including increased visual field and target detection, advanced air-to-surface capabilities and enhanced electronic protection measures.

More specifically, Finmeccanica-Selex ES will produce the new radar at its facilities in Edinburgh and Nerviano (Milan, Italy) while Finmeccanica-Alenia Aermacchi (Turin, Italy site), in the radar integration phase, will be responsible for the navigation systems.

“I am particularly proud of the contract signed today”, said Finmeccanica’s CEO and general manager, Mauro Moretti. “It is further evidence of how the products and services provided by Finmeccanica Group represent cutting edge technological solutions capable of guaranteeing high performance levels in line with the best market standards.

“The production of the new Captor-E radar will be managed, in the role of project leader of the Euroradar Consortium, by Finmeccanica-Selex ES which, together with Finmeccanica-Alenia Aermacchi, will also jointly integrate it into the aircraft.”

Ho concluded, “Today’s signing represents an important step forward towards the future prospects of the Eurofighter programme since the aircraft upgrade will enable it to compete more effectively on international markets.”

Finmeccanica Group is responsible for over 60 per cent of the electronics on board the Eurofighter Typhoon, roughly 20 percent of the aerostructures, and for the training and simulation activities for both the four Partner Nations (United Kingdom, Italy, Germany and Spain) and for customers in its export markets.