We use cookies to provide you with a better experience. By continuing to browse the site you are agreeing to our use of cookies in accordance with our Privacy Policy.
Home » Disruptive Factors in the Global Long Haul Market

Last summer, Sky Light Research (SLR) published a special report on the long haul market for North America. Due to LTE and its IP data centric requirements,long haul radios in North America were undergoing a transformation – becoming much more compact, flexible, powerful and fast. As of summer 2013, these slimmer, more agile radios were only available for the North American market, however, as SLR predicted,these radios are now available for the global market. Over the last year and a half, several vendors have added new or improved long haul product offerings to their portfolios. 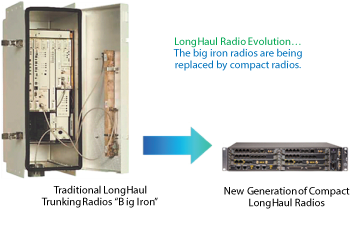 Agile Architecture: Many vendors offering traditional trunking radios have updated their products to have a split mount version, since many operators cannot afford or do not want the expense associated with the shelters and required air conditioning needed to support a traditional microwave trunking solution. By placing part of the radio outside, it reduces the footprint and the expense required to keep the shelter and the equipment cool. 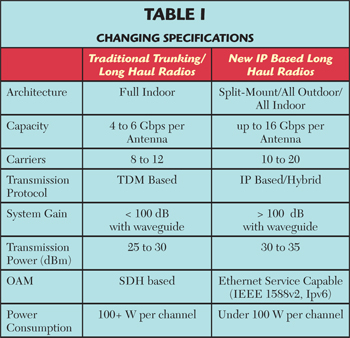 Traditional long haul or trunking radios are “big iron” radios that have large footprints. In some cases, especially in the non-mobile verticals, these radios are still preferred. However, mobile operators are driving the growth in the long haul segment, and they require a different type of architecture to resolve the quandary of limited real estate that is becoming increasingly expensive. This is one of the driving changes for long haul radios. Newer, compact IP-based long haul radios can now be used outdoors, indoors or in a split mount configuration.

All outdoor radios can be hung on poles, eliminating the footprint in the cabinet. This architectural change has expanded the use of long haul not only to the core, where a cabinet exists, but also to the cell’s edge, due to its smaller form factor.

With its MPR9500 MPT-HL for the North American market, Alcatel Lucent was first-to-market with this concept. Until 12 to 18 months ago, Alcatel-Lucent owned the IP based compact long haul market in North America. Other vendors quickly realized the market potential and developed their own radios. Operators now have several options for compact IP based long haul solutions as LTE rolls out across the globe.

Capacity: It is well known that capacity requirements in the network are on an upward trajectory. Long haul radios approach capacity slightly differently than short haul radios. The unique characteristic of long haul radios is its branching mechanism. This allows the aggregation of several carriers on one antenna, which creates a very high capacity radio.

For example, Huawei’s new long haul IP based radio is able to reach 16 Gbps – by aggregating 16 carriers of 1 Gbps each to one antenna, making it one of the highest capacity radios on the market.

Power: Like capacity, power also is increasing. The defining characteristic for long haul or trunking radios is high power, which makes them able to send the signal a longer distance (hence the name long haul). Today, long haul radios are pushing the power threshold, reaching 35 dBm, which emasculates the traditional 20 to 26 dBm of a few years ago. SIAE’s radio can reach 35 dBm with 20 dB automatic transmit power control (ATPC).

Hybrid/IP based: Long haul radios with TDM are still required in many cases, due to TDM’s ability to handle issues such as multi-path fading. However, future growth in long haul radios will be driven by Hybrid and/or IP based radios. This movement is making hybrid radios a more strategic choice over TDM radios for those customers who need a smooth transition from TDM to IP. Trunking/long haul radios are often used at aggregation points or in the backbone of the network where various types of media come together. Hybrid radios, by definition, can natively service the various traffic types, making them an important piece in the microwave tool kit. IP based long haul radios, however, are ideal for mobile data networks, like LTE and HSPA, where increased capacity is a must in order to support more IP packet-based services and applications.

Green/Energy Efficient: As with all networking infrastructure equipment, energy efficiency is important. Whether the trunk radio is being used in a fixed line provider’s central office located in a remote region, or it’s being hung on a pole in a mobile operator’s network in a suburb, going green is important. Previously, radios were using over 100 W per channel; however, long haul radios today use less. Aviat’s STR-600 long haul radio is one of the most efficient on the market, using less than 60 W per channel.

SLR expects 2014 to be the first year where we see IP based long haul radios out-ship TDM radios (see Figure 2). This has already occurred in North America since the North American market is the region where long haul has the greatest demand. The shift in North America was driven by mobile operators rolling out LTE. Historically, mobile operators played a small part in long haul revenue generation due to their reliance on short haul radios. One of the central changes in the new long haul radios is its flexible architecture/compact footprint that is similar to short haul radios. Equipment vendors are taking full advantage of this feature, appealing to operators’ desire to save real estate.

Although compact IP based long haul revenue outside of North America is still in its infancy, SLR believes that this will change in the next 12 to 18 months, with strong growth occurring worldwide. There are just a handful of equipment manufacturers who offer compact IP based long haul radios for regions outside of North America, with Alcatel-Lucent and Huawei being among them. These two vendors represent a market bellwether of sorts because:

2.) Huawei is a leading microwave vendor and has never had a long haul offering. Since they are making their foray into the long haul market with an IP based compact long haul radio, they must have some very large customers asking for this solution. Huawei has been aggressive in winning 4G bids and SLR suspects that this latest radio is a product driven from customer requests.

The Long and the Short of the Long Haul Market

Historically, global long haul revenue has paled in comparison to short haul revenue. Despite this, long haul radios are a vital and steady market for the manufacturers that sell them worldwide. Although they are not used as much as short haul radios, their price points are much higher, with prices typically between $14,000 and $40,000 a link, depending on the application and load. The higher price points, combined with new applications for IP based compact long haul, will rejuvenate the market and drive up  revenue.

Long haul radio applications run the gamut from backhaul to interconnecting buildings. Key verticals include utility companies, government agencies, enterprises, public service agencies, fixed line service providers and mobile operators. Private networks use long haul to connect remote locations to a headquarters for redundant links or for public safety, security and surveillance. Mobile operators use them nearer the central office to transport the traffic generated from cell sites on the edge back to the core. Public and private networks use long haul for connecting metro or building rings in the core of the network when fiber is not a practical solution. Because of their mission critical applications, long haul radios need to be highly reliable with high capacity data services. To achieve the multi gigabit capacity often required, most long haul radios support technologies like XPIC.

The competitive landscape for long haul/trunk radios is dominated by less than a dozen equipment vendors. All of these, except Fujitsu, have a traditional short haul microwave radio offering as well. Some of these vendors are new to the long haul market, and are using their strong position in the short haul arena to leverage long haul sales.

Alcatel-Lucent: Alcatel-Lucent was the first to have a compact IP based long haul radio. Their innovative 9500 MPR platform has been tried and tested in real LTE deployments and thus, Alcatel-Lucent understands what mobile operators require for mobile broadband long haul deployments. The MPR 9500 long haul version offers 20 channels/antenna, up to 16 Gbps, and carrier class Ethernet services like redundancy, IEEE 1588 v2 and Synch E.

Aviat: Aviat has three long haul/trunking solutions – WTM6000, STR600 and IRU600, with the IRU600 only for North America. The WTM6000 is a traditional trunking radio, while the STR600 is split-mount. The trunking radio can support up to 16 channels, transport 4 Gbps of traffic and has a L2 carrier Ethernet switch. The STR600 does not require waveguides which makes the radio much more economical and provides better system performance than higher power all indoor trunking radios. 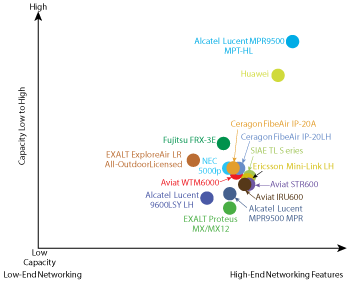 Ceragon: Ceragon’s long-haul portfolio is built around the new, SDN-ready IP-20 platform and comes with a range of ANSI and ETSI configurations. Ceragon’s fully protected longhaul solutions feature high density and high capacity and offer rich functionality. The IP-20 Platform simplifies the migration from Native TDM and Hybrid to all packet architectures. Because the new IDUs are completely backwards compatible with Ceragon’s entire portfolio, including FibeAir and Evolution radio units, Ceragon customers require the replacement of only the IDU while keeping the radios, antennas, branching and waveguides/coax intact.

Ericsson: Ericsson has long been the leading microwave vendor and one of the leading vendors in the trunking/long haul radio market. They have recently made some changes to the Mini-Link LH radio, by offering a flexible, semi-compact or trunking version. The Mini-Link LH is part of its Mini-Link platform, offering interchangeable short haul and long haul radios for maximum flexibility and scaling.

Fujitsu: Fujitsu has one of the most OEM’d trunking/long haul radios around. Several microwave radio vendors private label their FRX-3E. Fujitsu prides itself on offering true hybrid quality. So instead of being solely focused on Ethernet services, and possibly sacrificing some traditional features, such as N+1 SDH, that can be critical for multi-path fading, Fujitsu is focused on helping customers facilitate a smooth migration from TDM to Ethernet.

Huawei: Huawei has been a leading vendor in the short haul market and has recently introduced a compact IP based radio for the long haul market. Their radio seems to have all the bells and whistles – compact, very high capacity (16 Gbps), up to 16 channels, up to 34 dBm transmit power and all the required Ethernet services.

SIAE: SIAE’s TL trunking radio is a hybrid radio that offers 16 channels per rack. It not only supports variable bandwidth options, but also supports Ethernet services such as Synch E and IEEE 1588 v2. Its very high power of 35 dBm is one of the highest available.

The features listed above are all important, but how do equipment vendors stack up on the key specifications? SLR surveyed radio vendors based on the metrics listed in Table 1 and then assigned a score to each. These were then tabulated for a networking score (see Figure 3) – the higher the aggregated score, the further to the right of the chart the radio lies. The higher the capacity, the further to the top of the chart the radio lies.

Specifications were from vendors’ data sheets and claims they made on surveys. Some of these claims were not able to be verified. If no information could be found, assumptions were made.

Emmy Johnson is the founder and principal analyst of Sky Light Research, a third-party analyst firm specializing in wireless point-to-point mobile backhaul technologies such as microwave, sub 6 GHz and millimeter wave radios. The firm’s popular services include quarterly market share reports and forecasts. Sky Light Research was founded in 2001 and is located in Scottsdale, Ariz. For more information, please email info@SkyLightResearch.com or call (480) 563-2251