We use cookies to provide you with a better experience. By continuing to browse the site you are agreeing to our use of cookies in accordance with our Privacy Policy.
Home » Design of a Compact Wideband Bandstop Filter with Three Transmission Zeros

A sharp-rejection wideband bandstop filter (WBSF) is designed in a compact, planar form factor. Three transmission zeros are excited to create a wide stopband response that is easily adjusted by tuning the physical parameters of the structure. The assembled filter demonstrates an 89.5 percent stopband with a rejection of more than 50 dB at both transitions. The circuit area is 0.022λg.2

he WBSF is a key enabler for suppressing unwanted signals in broadband wireless systems. Conventional microstrip BSFs1 consisting of shunt open-circuited stubs are relatively large and have narrow stopbands. Today, however, various methods and structures are available to increase filter rejection in a reduced size. Qian2 introduces a new compact WBSF with a multilayer embedded capacitor in LTCC. It has a wide bandwidth, but has low rejection levels. Mandal and Sanyal3 describe a structure consisting of two parallel coupled microstrip line sections in shunt connection, while Shaman and Hong4 use a cross-coupled configuration. For both of these filters, rejection decreases with wider bandwidth and their 20 dB fractional bandwidths are narrower than desired. To address this, a filter designed with a coupled line and two signal paths, is proposed by Sánchez-Soriano and Torregrosa-Penalva,5 however, its size can still be decreased. High rejection is achieved by Chiou and Tai6 with a dual-band BSF using a dual-mode loop resonator and a cross-coupled capacitor. Its 20 dB FBW is over 100 percent, but the exact capacitance is hard to control at high frequencies. 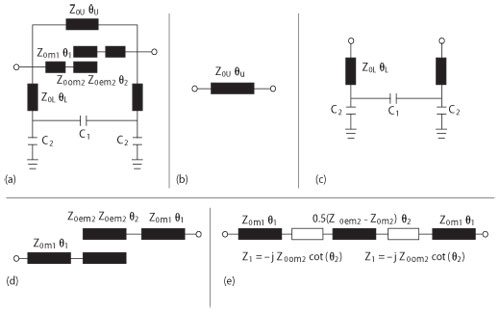 This article describes a new compact WBSF topology in planar microstrip with three transmission zeros in the stopband (see Figure 1). Design equations and parametric curves are provided. The WBSF not only improves rejection and bandwidth, but is also compact and is easy to design, control and fabricate.

Since the configurations in Figures 1b, c and e are all symmetrical, they can be decomposed into even- and odd-mode excitations, as shown in Figure 2.

When excited in the odd-mode, its input admittance is given by

and the input reflection is

where Z0 is the port impedance.

Similarly, when the circuit is excited in the even-mode, the input admittance is given by

and the input reflection is 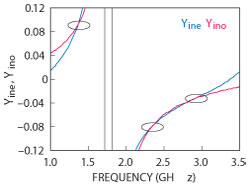 Figure 3 Even- and odd-mode admittances. 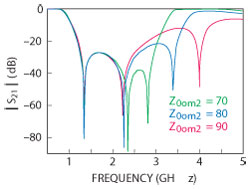 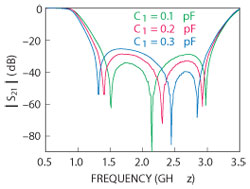 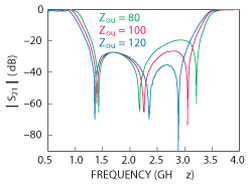 Figure 6 shows how S21 is influenced by the characteristic impedance of Z0U. With increasing characteristic impedance, suppression at high end of the band increases, leaving suppression at the lower extreme of the band relatively unchanged. The frequency of the second transmission zero increases with increasing Z0U, while the frequency of the third transmission zero decreases. The first transmission zero also decreases, but at a lower rate, therefore, the bandwidth decreases. (Z0L = Zom1 = 120 Ω, Z0om2 = 158 Ω, Z0em2 = 71 Ω, θU = 62°, θL = 11°, θ1 = 11°, θ2 = 32°, C2 = 4.2 pF, C1 = 0.24 pF).

From the above observations, adjusting the value of the coupling capacitor (C1) appears to be the most effective way to control the attenuation poles, because changes to Z0om2 and Z0U have a significant effect on only one transmission zero. 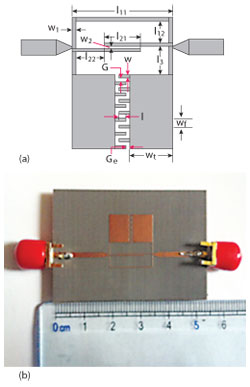 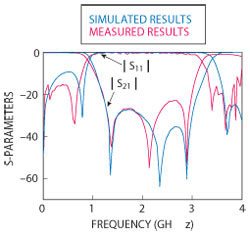 Ting Lang is currently working toward the electronic and information engineering bachelor’s degree at the school of Qixin, Zhejiang Sci-Tech University, China. Her research interests include microwave passive circuit design and its applications.

Lin Li received both his bachelor’s and master’s degrees at Zhejiang University and his PhD at Shanghai Jiaotong University. He is currently an associate professor at Zhejiang Sci-Tech University. His research interests include microwave passive circuit design and its applications.

Li-Li Yang is currently working toward the communication engineering bachelor’s degree at the school of Qixin, Zhejiang Sci-Tech University. Her research interests include microwave passive circuit design and its applications.

Zhi-Hao Zhang is currently working toward the communication engineering bachelor’s degree at the school of Qixin, Zhejiang Sci-Tech University. His research interests include microwave passive circuit design and its applications.