We use cookies to provide you with a better experience. By continuing to browse the site you are agreeing to our use of cookies in accordance with our Privacy Policy.
Home » Phase Noise Measurements and System Comparisons

One of the most important parameters for oscillators is phase noise as it is critical to most applications.1-21 There are several methods for measuring phase noise which will be covered here including the pros and cons of each technique. Example measurements on various types of systems will also be compared including their accuracy and speed.

The pioneer in phase noise measurement was Hewlett Packard.1,2 Modern phase noise systems use the correlation principle but this method has some drawbacks. The most direct and sensitive method to measure the spectral density of phase noise, SΔθ(fm), requires two sources – one or both of them may be the device(s) under test – and a double balanced mixer used as a phase detector (see Figure 1). The RF and LO input to the mixer should be in phase quadrature, indicated by 0 V dc at the IF port. Good quadrature assures maximum phase sensitivity Kθ and minimum AM sensitivity. With a linear mixer, Kθ equals the peak voltage of the sinusoidal beat signal produced when both sources are frequency offset.

When both signals are set in quadrature, the voltage ΔV at the IF port is proportional to the fluctuating phase difference between the two signals.

= V B peak for a sinusoidal beat signal.

The calibration of the wave analyzer or spectrum analyzer can be read from the equations. For a plot of L(fm), the 0 dB reference level is to be set 6 dB above the level of the beat signal. The -6 dB offset has to be corrected by +1.0 dB for a wave analyzer and by +2.5 dB for a spectrum analyzer with log amplifier and average detector. In addition, noise bandwidth corrections may have to be applied.

Since the phase noise of both sources is measured in this system, the phase noise performance of one of them needs to be known in order to measure the other source. Frequently, it is sufficient to know that the actual phase noise of the dominant source cannot deviate from the measured data by more than 3 dB. If three unknown sources are available, three measurements with three different source combinations yield sufficient data to accurately calculate each individual oscillator’s performance.

Figure 1 indicates a narrowband phase-locked loop that maintains phase quadrature for sources that are not sufficiently phase stable over the period of the measurement. The two isolation amplifiers should prevent injection locking of the sources. Residual phase noise measurements test one or two devices, such as amplifiers, dividers or synthesizers, driven by one common source. Since this source is not free of phase noise, it is important to know the degree of cancellation as a function of Fourier frequency.

Noise floors close to -180 dBc can be achieved with a high-level mixer and a low-noise port amplifier. The noise floor increases with fm-1 due to the flicker characteristic of ΔVn. System noise floors of -166 dBc at 1 kHz have been realized. This is the limitation of this approach.

In measuring low-phase-noise sources, a number of potential problems have to be understood to avoid erroneous data: 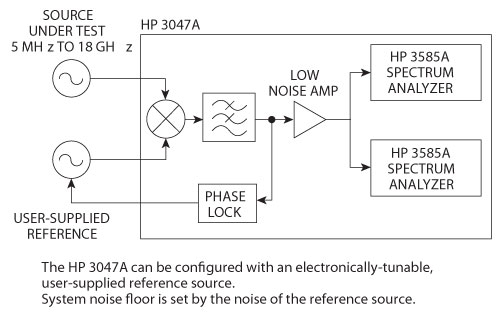 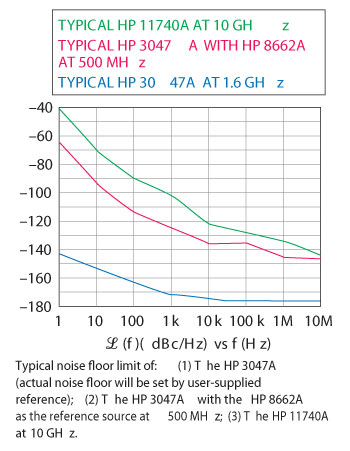 Despite all these hazards, automatic test systems have been developed and operated successfully for years.4 Figure 2 shows a system that automatically measures the residual phase noise of the 8662A synthesizer. It is a residual test, since both instruments use one common 100 MHz referenced oscillator. Quadrature setting is conveniently controlled by probing the beat signal with a digital voltmeter and stopping the phase advance of one synthesizer when the beat signal voltage is sufficiently close to zero.

As shown in Figure 3, the Hewlett Packard test equipment HP3047A was built around a double-balanced mixer which can handle +23 dBm of power. While this HP equipment is no longer manufactured and has been replaced by the Agilent E5052A and E5052B, this system shows some interesting features.

From a system’s point-of-view, the numbers are not that optimistic, as seen from Figure 5. The reason for this is that the transistor used in the oscillator has its own noise contribution. This system is used to measure residual noise in amplifiers or switches. This is an important diagram for system planning. 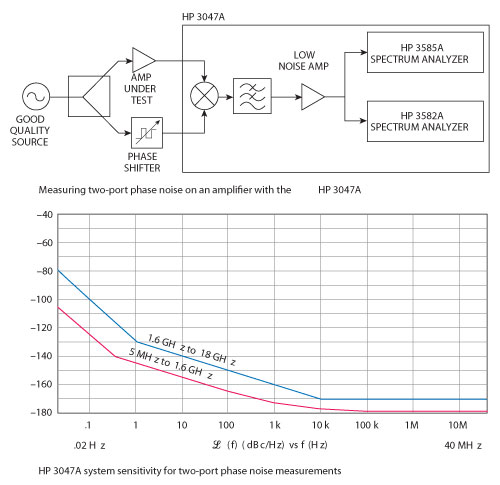 The HP 3047A has a built-in crystal oscillator and its measured phase-noise is shown in Figure 6. These measurements are actually a little better than what was specified by HP but these are not as good as modern measurement systems.

Synergy kept the old HP system hardware for these references. The system is software based and used an FFT analyzer; for its time this was the best system around, but the measurements took a long time to make. Modern test equipment using the cross-correlation methods are at least 20 times faster.

Noise in Circuits and Semiconductors 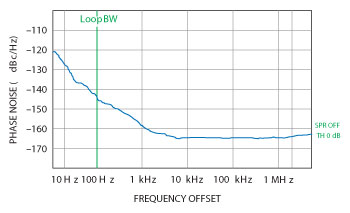 Microwave applications generally use bipolar transistors and following are their noise contributions.3,5,6,9,21

It is expressed as

The power can be written as: 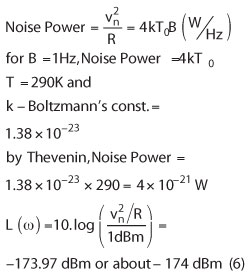 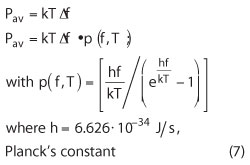 where q is the charge of the electron, P is the noise power, and Idc is the dc bias current.

Z is the termination load (can be complex).

Example: The noise for a conducting diode is bias dependent and is expressed in terms of AF and KF. 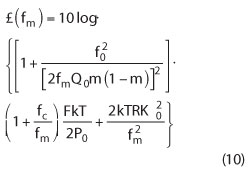 In the past this was done with the Leeson formula, which contains several estimates, those being output power, flicker corner frequency and the operating (or loaded) Q. Now, one can assume that the actual phase noise is never better than the large signal noise figure (F) given by the following equation:13,14 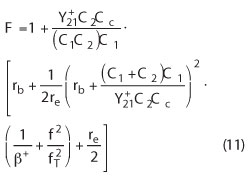 The old systems have an FFT analyzer for close-in calculations and are slower in speed. Modern equipment use the noise-correlation method. The reason why the cross-correlation method became popular is that most oscillators have an output between zero and 10 dBm and what is even more important is that only one source is required. The method with a delay line, in reality required a variable delay line to provide correct phase noise numbers as a function of offset (this is shown in reference 1, pp. 148-153, Fig. 7.25 and 7.26). 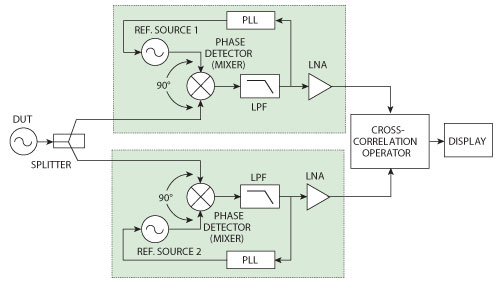 where Nmeas is the total measured noise at the display; NDUT the DUT noise; N1 and N2 the internal noise from channels 1 and 2, respectively; and M the number of correlations. The two-channel cross-correlation technique achieves superior measurement sensitivity without requiring exceptional performance of the hardware components. However, the measurement speed suffers when increasing the number of correlations.5 The built-in synthesizer limits the dynamic range and that is the reason why at lower frequencies crystal-oscillators are used. 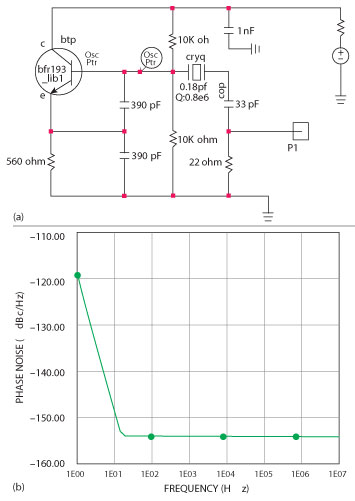 The assumption is that the internal reference sources 1 and 2 are at least equal in noise contribution as the DUT and assuming a correlation of 20 dB (limited by leakage and other large signal phenomena) divider noise, those references can be 20 dB worse. Both Rohde & Schwarz and Agilent use a synthesized approach. This limits the dynamic range close-in to the carrier and far-out to the carrier. When using the correlation to get 10 dB more dynamic range, 100 correlations are necessary or the measurement is one hundred times slower. The R&S FSUP is a combination of a spectrum analyzer and the phase noise test setup while the Agilent E5052B is a dedicated system, about 4-6 times faster.

Advantages of the Noise Correlation Technique11-19

All of which depends upon the internal synthesizer.

Disadvantages of the Noise Correlation Technique 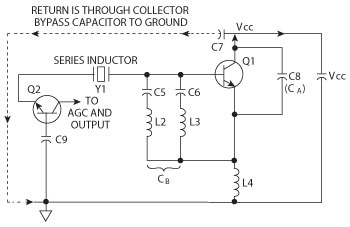 Another problem is the physical length of the crystal oscillator connection cable to the measurement system. If the length provides something like “quarter-wave-resonance,” incorrect measurements are possible. The list of disadvantages is quite long and there is a certain ambiguity concerning whether or not to trust these measurements or if they are repeatable.

Here are some important examples of crystal oscillators. The first one is by Rohde (1975) and is shown is Figure 8a with simulated phase noise shown in 8b.4,9 This represents the phase-noise of the oscillator without the buffer-amplifier shown inFigure 8a.Most modern equipment uses the crystal oscillator using Rohde’s design technique (see Figure 9). The actual measured numbers are shown in Figure 6. Another important oscillator is by Michael Driscoll. This circuit is shown in Figure 10a and its simulated phase noise in Figure  10b. The crystal is used as a filter to ground. We have seen applications of this design from 10 to 100 MHz. Sometimes there is a stability problem with upper transistor of the cascode. Another important contribution is the introduction of the stress-compensated or doubly-rotated crystal, in short SC cut. This took over after the AT cut. Its drawbacks are possible spurious resonance and higher cost, but the actual phase-noise is 6 to 10 dB. So far there is no clear explanation of why this is the case.10,11 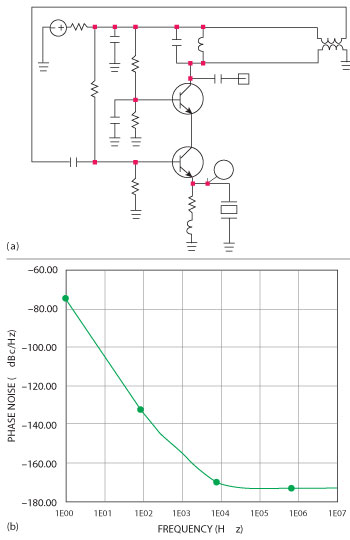 Figure 10 Driscoll oscillator (a) and simulated phase noise (b).

Figure 12 Buffer amplifier block diagram (a) and simulated noise figure and Fmin (b). 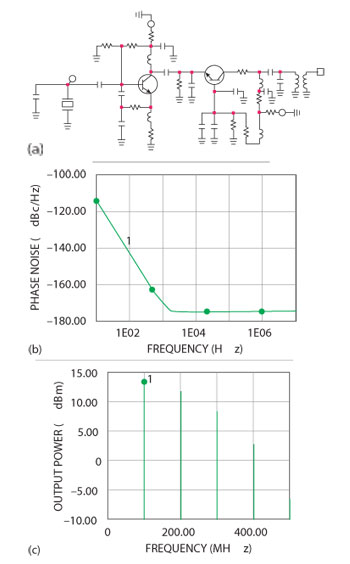 Figures 14 through 17 show measured results from the 100 MHz crystal oscillator performed on systems from Agilent, Rohde & Schwarz, Holzworth and AnaPico, respectively. Appendix I (see online at www.mwjournal.com/synergyappendix) shows the phase noise calculation for this oscillator. The calculated 100 Hz offset phase noise is −146 dBc/Hz and the far out phase noise is − 183.3 dBc/Hz  (see Figure 18). These numbers agree well with the R&S FSUP measurements. The Agilent results are close, but the system is not optimized as the “sweet-spot” has not been characterized. This may be frequency and power level dependent. The Holzworth equipment shows the best close-in correct phase noise level, but we have not found the proper correlation figures. The AnaPico test equipment seems to have a hump, but generally agrees well with the calculations. The Holzworth equipment performs the measurement in approximately 3 to 4 minutes (5 correlations), and about 1 minute with no correlations and 3 dB worse phase noise. 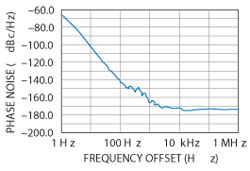 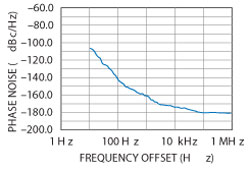 In this article, we have looked at typical oscillator circuits and some of their design rules. Calculations for phase noise were reviewed. Various systems were reviewed measuring a 100 MHz crystal oscillator. The phase noise equations give the best possible phase noise. If the equipment in use, after many correlations, gives a better number, it violates the laws of physics as we understand them and if it gives a worse number, then either the correlation settings need to be corrected or the dynamic range of the equipment is insufficient. We realize that this treatment is exhaustive, but we think that it was necessary to explain how things fall into place. At 20 dBm output, the output amplifier certainly has a higher noise figure, as it is driven with more power and there is no improvement possible. There is an optimum condition and some of the measurements showing -190 dBc/Hz do not seem to match the theoretical calculations. The correlation allows us to look below KT, but the noise contribution below KT is as useful as finding one gold atom in your body’s blood. This gold atom has no contribution to your system. 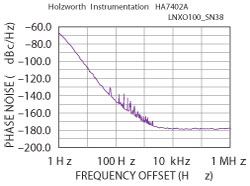 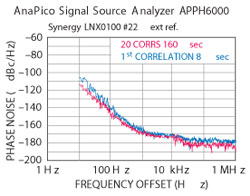 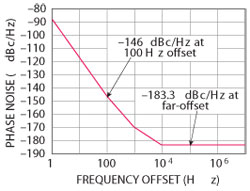