We use cookies to provide you with a better experience. By continuing to browse the site you are agreeing to our use of cookies in accordance with our Privacy Policy.
Home » Affordable Mixed Domain Debug and Analysis

Tektronix, Beaverton, OR
No Comments 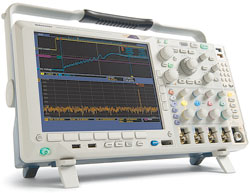 Last year, Tektronix launched a new category of oscilloscope with the introduction of the MDO4000 Series, the first, and currently the only, oscilloscope on the market with a built-in spectrum analyzer. Now the company is introducing two new entry level models that put breakthrough time and frequency domain analysis in the hands of engineers at more affordable price levels.

Inexpensive or “cheap” RF technologies are being integrated into everyday applications from apparel tags, to livestock monitoring clips, price displays on store shelves and short-range wireless remote control of household objects. While many of these are lower-performance applications, the addition of RF makes debug challenges greater than ever. The new MDO4000 models address this trend by providing a lower cost entry point solution that allows engineers to capture time-correlated analog, digital and RF signals for a complete system view, saving days or even weeks of debug time.

Like other MDO4000 models, the new MDO4014-3 and MDO4034-3 models offer four analog channels, 16 digital channels and one RF channel. To achieve prices starting at $12,200, the new models offer lower analog bandwidth of 100 and 350 MHz respectively, sufficient for many inexpensive RF applications. RF frequency range for all models extends from 50 kHz to 3 GHz. 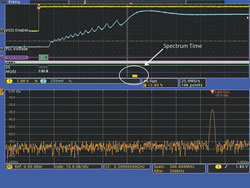 Figure 1 The MDO4000 displays time correlated view of both the time and frequency domain.

In today’s world, it seems like wireless is showing up almost everywhere, an observation supported by industry watchers. For instance, iSuppli estimates that 1 billion wireless LAN devices will ship in 2012 with 2 billion expected by 2014.  Similarly, ABI Research says that wireless sensor networks will grow from 10.2 million chipsets in 2009 to 645 million in 2015, a 99.6 percent annual growth rate. In the RFID segment, forecasts call for shipments of 3.98 billion tags in 2012, up more than 1 billion over 2011 shipments.

Engineers tasked with integrating RF face a number of design challenges, including the need to not only characterize, debug and test the RF interface, but also to ensure that the RF systems interact nicely with the rest of the electronics in the device. Interference and interaction from RF sources in the environment, as well as other electrical signals in the system, also need to be characterized and understood in order to successfully integrate RF technology into a product.

Based on the Tektronix MSO4000B mixed signal oscilloscope series, the MDO4000 Series offers intuitive operation and information-rich displays. When both the RF channel and any analog or digital channels are on, the oscilloscope display is split into two views, as shown in Figure 1. The upper half of the display is a traditional oscilloscope view of the time domain. The lower half of the display is a frequency domain view of the RF input. These two views are tied together by a feature called Spectrum Time, which is indicated by the small orange bar at the bottom of the time domain view. Spectrum Time indicates where in time the spectrum shown in the lower half of the display came from. Spectrum Time can be moved anywhere in the acquisition, enabling the user to see time correlated analog, digital and RF signals. 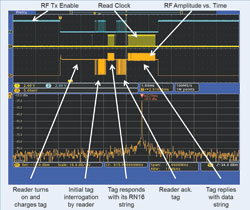 In addition, the time domain window can also provide support for RF time domain traces which show the user instantaneous amplitude, frequency or phase over time as shown in Figure 2.

Given its rapid growth, RFID is likely to be a segment that many engineers will need to address in the next few years. However, integration of RFID into a system raises a number of questions that require multi-domain analysis. Does the RF signal from the reader interfere with proper operation of other parts of the system?  Do the system clocks, or switching power supplies, or high-speed data interfaces, affect the performance of the RFID system?  Are the RF signals being properly gated, controlled and demodulated in sync with the command and control signals from the rest of the system?

As shown in the RFID application example in Figure 2, the MDO4000 correlates RF activity with the rest of the system under test for easy device debug and verification. In a single acquisition, it is able to capture the RF communications from both the reader and the tag while allowing the designer to visualize other critical system signals.

In Figure 3, the MDO4000 is used to see time correlated events across a wireless power switch. In this case, a single trigger event coordinates an acquisition across all channels, allowing the user to capture a spectrum at the precise point in time where an interesting time domain event is occurring. A comprehensive set of time domain triggers are available, including Edge, Sequence, Pulse Width, Timeout, Runt, Logic, Setup/Hold Violation, Rise/Fall Time, Video and a variety of parallel and serial bus packet triggers. 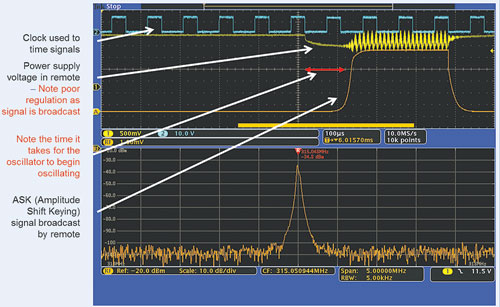 Figure 3 The MDO4000 provides a triggered acquisition system that is fully integrated with the RF, analog and digital channels.

The MDO4000 Series addresses the needs of the more than 60 percent of engineers facing the need to debug systems in both the time and frequency domains. It incorporates a notable number of features including the following (many of which are reported to be industry firsts):

In addition to the new MDO4000 models, Tektronix also announced the TPA-N-PRE pre-amplifier for use on all MDO4000 oscilloscopes. This new pre-amplifier further lowers the already low noise floor of the RF channel, enabling engineers to pull very low level signals out of the noise.