We use cookies to provide you with a better experience. By continuing to browse the site you are agreeing to our use of cookies in accordance with our Privacy Policy.
×
Home » Generating Radar Signals with an Arbitrary Waveform Generator

The generation of signals for radar system testing is challenging due to the complexities associated with carrier frequency generation, intricate modulation schemes and periodic (pulsed) waveforms; while the ability to accurately emulate real-world targets and conditions is essential to the thorough evaluation of radar devices and designs. Historically, radar signal generation has been accomplished with a baseband signal generator and an RF/microwave modulator. With up to 50 GS/s sampling rate at 10 bits vertical resolution, however, today’s new arbitrary waveform generators (AWG) offer the performance needed for direct generation of fully modulated RF/microwave signals. Before looking more closely at the use of AWGs for radar testing, let’s first explore some of the characteristics of radar signals.

Carrier frequencies used in radar systems cover most of the usable radio frequency spectrum, ranging from very low frequencies required for long range and over-the-horizon surveillance radar up to millimeter wave used in some high-resolution, small size military and civilian radar. Most radar systems, however, operate at frequencies less than 18 GHz (Ku-Band).

Signal types may be divided into the two main groups:

For pulsed RF radar waveforms, the transmitting frequency may be fixed or variable (frequency agile). This takes the form of frequency hopping patterns. These patterns are complex, non-predictable, and typically non-repeating (or repeating over extremely long periods of time). The carrier frequency may even change for each transmitted pulse.

An important issue for some radar systems is carrier phase coherence. In some systems, such as those employing a high-performance coherent Moving Target Indicator (MTI) architecture, phase coherence must be preserved between consecutive pulses. Regardless of the phase characteristics of the transmitted pulse, returning echoes are a superposition of signals with a variety of relative phases. There are multiple target echoes with arbitrary delays, multiple echoes from the same target with different time of arrival due to multi-path, all kinds of clutter, and frequency shifts caused by the Doppler effect. The instantaneous amplitude and phase for a given echo is also influenced by a target’s shape and size. No matter the complexity of the transmitted signal, the reflected signal will be much more complex.

Baseband and IF generation can be implemented with a moderate performance AWG for most signals; however, in both cases, the modulation bandwidth of the final RF/microwave signal will be limited by the characteristics of the modulator or up-converter. Direct RF signal generation, on the other hand, requires an extremely fast AWG with a sampling rate at least 2.5 times higher than the maximum RF frequency component of the signal. The latest generation of AWGs offers 10 bits of resolution at speeds up to 50 GS/s, opening the door for direct signal generation beyond Ku-Band (12 to 18 GHz).

Baseband signal generation may appear relatively straightforward because modulation and up-conversion are performed externally. The modulation device may be a simple amplitude (AM) modulator for basic pulsed RF signal generation, however some baseband signals require a suppressed carrier, which is not supported by most AM modulators, as the instantaneous phase can take two values (0° and 180° or BPSK). Baseband generation of FM chirps, QPSK/QAM and UWB OFDM signals requires a two-channel AWG and an external quadrature modulator (see Figure 1) as both the instantaneous amplitude and phase of the carrier must be controlled. Sampling rate requirements depend on the modulation bandwidth which is limited by the modulator. Similarly, emulation of realistic radar echoes incorporating the effects of the target characteristics, multi-path, Doppler shifts, noise and jamming also requires quadrature modulation and a two-channel AWG.

Generating good quality wideband modulated signals using this approach is not an easy task. Frequency responses of both baseband generators and RF modulators are not flat and group delay is not constant over the bands of interest when signal bandwidths are high. Even a perfect AWG incorporating ideal digital-to-analog converters (DAC) will show a zeroth-order hold response:

This introduces linear distortion to the RF pulses, altering the shape of the transitions and modifying rise and fall times. The analog frequency response of the AWG and cabling, and the modulator’s frequency response adds to these distortions. Unwanted images resulting from the sampled nature of signals generated by AWGs can also affect signal quality, and the limited time resolution available in any AWG may result in undesired levels of pulse-to-pulse jitter.

Fortunately, AWGs can generate either undistorted or intentionally distorted signals. Predistortion mathematically applied to waveforms stored in the generator’s memory may be designed to compensate for external distortion. After careful calibration of the overall frequency response it is possible to design a compensation filter that improves flatness and group delay response. Typically, the compensation filter takes the form of a pre-emphasis filter to correct the signal generation system’s overall lowpass frequency response.

For quadrature-modulated radar signals such as FM-chirps, two baseband signals, the I and Q components, feed the external modulator. These two components are generated independently and synchronously by a two-channel AWG or by two properly synchronized single-channel AWGs. Quadrature error and imbalance cause unwanted images to appear at the RF and at symmetric frequency locations, resulting in higher noise and reduced modulation quality. While AWGs can generate a differentially corrected signal, one should be aware that generating quadrature-modulated signals with an AWG and external modulator involves a time-consuming calibration process as well as additional equipment (typically a high-end real-time oscilloscope, a wideband vector signal analyzer, and supporting software).

AWGs can produce any signal from DC up to half the sampling rate (Fmax = Fs/2). With a high enough sampling rate, it is possible to directly generate a modulated RF signal. Previously, relatively low sampling rates and poor spurious-free dynamic range (SFDR) limited the capability of AWGs to generate carriers up to only a few GHz. With improved DAC performance, AWGs can now be used for direct generation of wideband signals with carriers up to 20 GHz and with almost unlimited modulation bandwidth. Direct generation offers a number of advantages over the traditional baseband/external modulator combination: 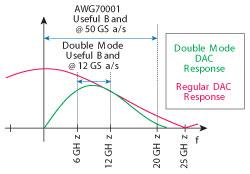 The implementation of direct carrier generation has its challenges, as well: 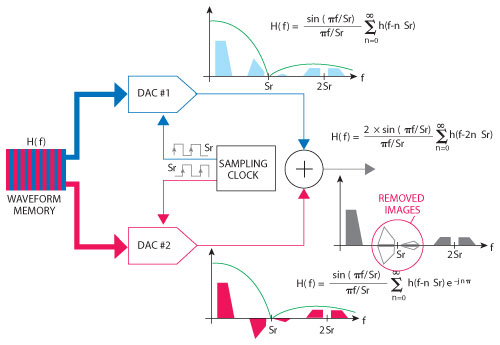 Continuous signal generation with an AWG requires seamless cycling of the contents of the waveform memory through the DAC. In order to obtain useful signals, consistency of the signal around the wrap-around event must be preserved. Timing characteristics of radar signals are especially important: 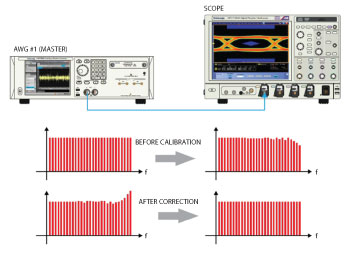 AWGs are typically flatness-corrected up to a certain frequency. Beyond that point, signal generators exhibit relatively gentle roll-off responses (see Figure 4). Moderate attenuation allows the direct generation of usable radar signals at higher frequencies. In order to improve modulation quality at those frequencies, the frequency response can be corrected or calibrated to compensate. Real-time oscilloscopes are ideal calibration tools as they show flatness and phase linearity over their full bandwidths with accurate channel-to-channel alignment. Once the correction filter response is determined in the frequency domain, it is applied to the original, uncorrected waveform through convolution. Convolution must be circular when signal looping is required.

Arbitrary waveform generators allow for the direct generation of complex radar signals at carrier frequencies up to 20 GHz. This is made possible by improved DAC performance and by the use of an interleaved DAC architecture. Some of the most complex frequency-agile or MIMO radar systems can be now be emulated using direct RF generation techniques.

Chris Loberg is a senior technical marketing manager at Tektronix responsible for oscilloscopes in the Americas region. Loberg has held various positions with Tektronix during his more than 13 years with the company, including marketing manager for Tektronix’ Optical Business Unit. His extensive background in technology marketing includes positions with Grass Valley Group and IBM. He earned his MBA in Marketing from San Jose State University.