We use cookies to provide you with a better experience. By continuing to browse the site you are agreeing to our use of cookies in accordance with our Privacy Policy.
Home » Nonlinear Starter Kit Supports Selection of 4-port VNAs 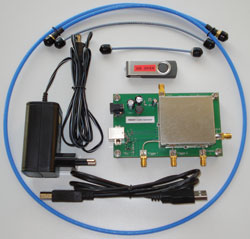 The NM310S is a cost-efficient nonlinear starter kit, allowing engineers to make their first steps in the nonlinear world with their vector network analyzer (VNA). VNAs are extensively used to characterize the small-signal behavior of diodes, transistors, amplifiers, etc., by measuring S-parameters. Now with the nonlinear starter kit, the VNA is easily extended, in an affordable way, to characterize the large-signal behavior of these devices.

Extending a VNA with this kit offers such options as the ability to assess how a diode is clipping the RF signals and offers the ability to see the RF drain voltage and currents of a transistor to improve the amplifier design. It can also allay any doubt about large-signal transistor models. The starter kit is also suitable for characterizing and improving multipliers, dividers and high-speed digital components.

The NM310S is a software/hardware combination, enabling the VNA to characterize in time and frequency domain the harmonic behavior of active components from 20 MHz to 3 GHz. This limited frequency range is suitable for measuring fundamental and two additional harmonics for telecommunications applications with a carrier around 1 GHz.

The starter kit supports a selection of 4-port Agilent and Rohde & Schwarz VNAs. Figure 1 shows the starter kit connected to a Rohde & Schwarz ZVA24. On top of the standard measurement capabilities of the vector network analyzer, the NM310S kit provides calibrated measurement capability of the time waveforms of the incident and reflected waves or voltages and currents at the ports of a component under test. 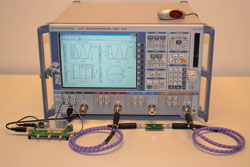 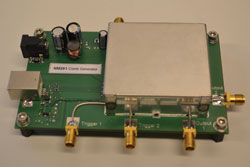 The kit consists of three main components. The first is a NM201 20 MHz to 3 GHz double-output comb generator (shown in Figure 2), where one output is used as synchronizer, enabling the reconstruction of time waveforms while the second output is used as Harmonic Phase Reference (HPR) supporting the required phase calibration. The second component is a SMA connection kit, while the third is a USB stick containing NMDG’s Integrated Component Characterization Environment (ICE) software installer, an ICE license, a quick start guide and several tutorials. 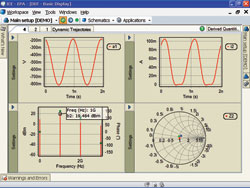 ICE is easy-to-use software for nonlinear HF component characterization, supporting system configuration, absolute calibration and measurement. It aims to characterize the complete nonlinear behavior of components under realistic conditions with almost real-time feedback. Figure 3 is a screenshot of a transistor measurement in ICE. It allows different instruments and equipment to be combined, enabling realistic stimuli-response measurements. With an easy-to-use graphical user interface, the user configures and calibrates the system to perform accurate nonlinear measurements.

The NM310S can be extended in frequency range to suit more application needs. It is possible to perform, amongst others, nonlinear measurements under non-50 Ω environment by adding passive and/or active tuners and under pulsed conditions by adding pulsed DC and/or RF generators.

To make these accurate nonlinear measurements available for design engineers to improve their design work, NM310S can also be extended with S-functions. S-functions are the S-parameters for nonlinear components and can be coupled in ADS™ from Agilent Technologies and MWO/VSS™ from AWR.