We use cookies to provide you with a better experience. By continuing to browse the site you are agreeing to our use of cookies in accordance with our Privacy Policy.
Home » Blogs » David Vye, MWJ Editor »

David Vye
No Comments
This news arrived today, Monday December 8th. Zensys (http://www.zen-sys.com/) and Nokia today announced the availability of the Z-Wave-enabled Nokia Home Control Center. Powered by Z-Wave technology, the device is compatible with the entire Z-Wave ecosystem of more than 300 home control products. Nokia is making a major step into the home automation and control market, which is expected to grow to $10 billion in the next two years.

Z-wave background
Z-Wave is a low-power wireless technology designed specifically for remote control applications. Z-Wave transforms any stand-alone device into an intelligent network node that can be controlled and monitored wirelessly. Unlike high-bandwidth standards such as IEEE 802.11-based systems that are designed for high-speed data, the Z-Wave RF system is optimized for low-overhead commands such as on-off and raise-lower (as in volume control). Applications for Z-Wave intelligence include home entertainment systems, lighting and appliance control, HVAC systems, security and access control, meter reading and digital home health care.
Z-Wave is a mesh networking technology where each node or device on the network is capable of sending and receiving control commands through walls or floors and around household obstacles or radio dead spots that might occur in the home. Z-Wave devices can work singly or in groups, and can be programmed into scenes or events that trigger multiple devices, either automatically or via remote control. 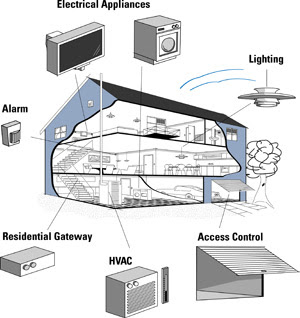 Because Z-Wave operates apart from the 2.4 GHz frequency of 802.11 based wireless systems, it is largely impervious to interference from common household wireless electronics, such as Wi-Fi routers, cordless telephones and Bluetooth devices that work in the same frequency range. This freedom from household interference allows for a standardized low-bandwidth control medium that can be reliable alongside common wireless devices.
As a result of its low power consumption and low cost of manufacture, Z-Wave is easily embedded in consumer electronics products, including battery operated devices such as remote controls, smoke alarms and security sensors. Z-Wave is currently supported by over 200 manufacturers worldwide and appears in a broad range of consumer products in the U.S. and Europe.

Zensys
Zensys offers the Z-Wave® protocol , a wireless RF-based communications technology designed for control and status reading applications in residential and light commercial environments. Z-Wave delivers reliable wireless networking at a fraction of the cost of other similar technologies, by focusing on narrow bandwidth applications and substituting costly hardware with innovative software solutions.
One clear benefit of electronic consumer devices that can be made to network together cheaply is that they can avoid the cost of building device to device networking into the house or business infrastructure itself. Given the housing slump, it is advantageous to offer a technology that is not to tied into that economy.