We use cookies to provide you with a better experience. By continuing to browse the site you are agreeing to our use of cookies in accordance with our Privacy Policy.
×
Stay Connected :
Home » Blogs » David Vye, MWJ Editor » Happy 50th to the Integrated Circuit Patent 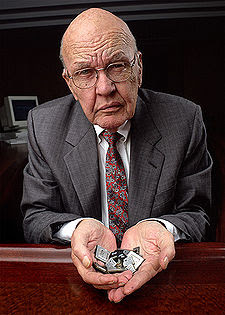 The transistor, invented at Bell Labs in 1947 had stimulated engineers to design ever more complex electronic circuits and equipment containing hundreds or thousands of discrete components such as transistors, diodes, rectifiers and capacitors. But the problem was that these components still had to be interconnected to form electronic circuits, and hand-soldering thousands of components to thousands of bits of wire was expensive and time-consuming. It was also unreliable; every soldered joint was a potential source of trouble, complex circuit designs were hampered by the unreliability of using numerous discrete devices. This problem was commonly called the "tyranny of numbers".

Texas Instruments (TI) was working on this issue via the Micro-Module program when Kilby joined the company in 1958. In mid-1958, Kilby finally came to the conclusion that this approach would not work and that manufacturing the circuit components in mass in a single piece of semiconductor material could provide a solution.

On September 12 he presented his findings to the management, which included Mark Shepherd, of Texas Instruments: he showed them a sliver of germanium, with protruding wires, glued to a glass slide. It was a relatively simple device that Jack Kilby showed to a handful of co-workers gathered in TI’s semiconductor lab — only a transistor and other components on a slice of germanium, but when Kilby pressed the switch, an unending sine curve undulated across the oscilloscope screen.

In addition to the integrated circuit, Kilby also is noted for patenting the electronic portable calculator and the thermal printer used in data terminals. In total, he held about 60 patents.

Appropriately enough for the occasion of this anniversary, the International Solid-State Circuits Conference, the foremost forum for presentation of advances in solid-state circuits and systems-on-a-chip runs next week from February 8th to the 12th in San Fransisco. Of particular interest to our industry will be sessions held on Radios for health services; Things all RFIC designers should know (but are afraid to ask); RF building blocks; Wireless connectivity; mm-wave devices and a forum on 4G front-ends.

The advance program is available at: