We use cookies to provide you with a better experience. By continuing to browse the site you are agreeing to our use of cookies in accordance with our Privacy Policy.
Home » Blogs » David Vye, MWJ Editor » Suede was a bad idea

Suede was a bad idea 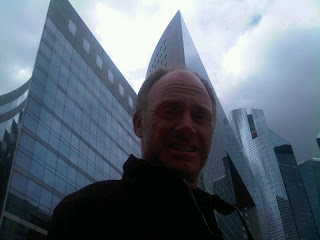 It is hard to complain about location when the European Microwave Week makes its way to Paris once every half dozen years or so. It is a beautiful city. To quote an e-mail received from a M/A-Com attendee – “ PS - I love Paris!!!!”. I might take fault with weather.com, which predicted sunny days in the mid-sixties. Instead, the air is about 10 degrees cooler and the skies look threatening. Bringing my suede jacket was probably a mistake. Regardless, fall is a great time to be in the land of Coulomb and Ampére. 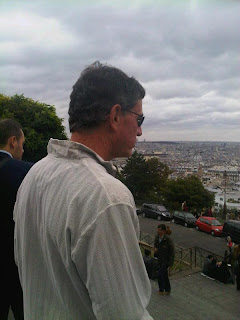 I took the Saturday night red eye from Boston along with MWJ publisher, Carl Sheffres (seen here overlooking the city). We spotted at least one microwave luminary, Rich Jerome on the plane with us. Several others were already standing around the hotel lobby as we checked in near the convention center. Microwave Journal’s parent company, Horizon House had already sent most of its exhibition support team half a week in advance, to begin preparations for the show taking place at the CNIT La Defense convention center. For us non-smokers, check-in would have to wait and so it was a quick fueling up of double espressos in the lobby and off to the train in order to catch some Sunday sightseeing, my only free day this week. 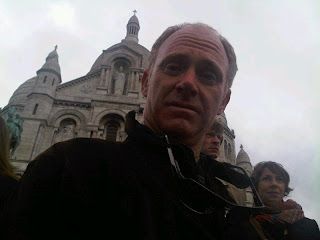 My schedule looks pretty full with meetings throughout the week, specifically with the test & measurement manufacturers – Rohde & Schwarz, Anritsu, Tektronix and Agilent (whom I already had a pre-show press briefing); a number of smaller nonlinear characterization companies, i.e. load pull including Maury Microwave, Focus, AMCAD, VTD, NMDG; integrated device manufacturers such as TriQuint, M/A-Com, and Analog Devices and software suppliers – AWR, Ansoft, CST and Sonnet.
I am looking forward to meeting some individuals face to face, whom I have only corresponded with via e-mail. One such company is SATIMO. They participated in our successful August issue – “The Masters of MIMO”, contributing an online white paper for the TestBench feature that month as well as our Expert Advice column. SATIMO calls Paris their home and so it is fitting that I open my Paris EumW blogging with a brief look at this local company.
Here's a brief look at the company. SATIMO SA (Société d’Applications Technologiques de l’Imagerie Micro-Onde SA) was founded in 1986 with the objective of developing high-speed microwave field measurement systems. The company started as a spin-off from the French engineering school Supélec, benefiting from years of research in the field of the Modulated Scatterer Technique.
During its first ten years, SATIMO performed research and prototyping of antennas, antenna measurement systems, non-destructive testing equipment, and tomographic imaging systems. SATIMO was entirely focused on the French Market and relied only on few customers. The founder, Prof. Jean-Charles Bolomey, decided to drastically change this situation by naming Philippe Garreau as the C.E.O. of SATIMO.
Au revoir for now. If you’re heading to the show, dress warm and pack an umbrella, just in case. And don’t forgot to sign up for the MWJ/Euma European Defence Executive Forum for Wednesday early evening. This should be an informative set of presentations and worthwhile networking opportunity.