We use cookies to provide you with a better experience. By continuing to browse the site you are agreeing to our use of cookies in accordance with our Privacy Policy.
Home » Blogs » David Vye, MWJ Editor » MWC - the week after

MWC - the week after 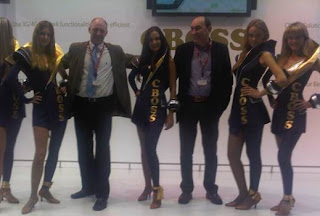 Everyone who "does" trade shows knows how a week away from the office and three days of back to back meetings can put you in the weeds. So while Richard Mumford and I have posted our show wrap-up and impressions earlier this week, I've been playing catch up on a number of fronts, including at least one more intended blog about events from Mobile World Congress. So here's some more on what we did not cover so far. For the complete Journal coverage of MWC try the links below.

My networking started Sunday, the day before my first day at MWC, in an Irish bar on La Rambla where we met VP of Sales John Loia and Kevin Dobis, American/EMEA Director of Sanjole. Chances are that during MWC week, if the person next to you in a restaurant or bar isnt a native, they are there for the congress. John and Kevin were great guys to hang with (and sing anthems with under pressure for the Irish), but they also represent an interesting company, Sanjole. Turns out that John is an old hand in the industry with over 20 years experience selling telecom test equipment to chip manufacturers, network equipment manufacturers and service providers and tenure at well-known industry leaders such as Spirent Communications, TTC and Hekimian.

Sanjole makes the WaveJudge WiMAX and 3GPP LTE test system. This test system determines what messages were sent, what events occurred, and the timing of those messages and events. Diagnosing the root causes of problems between layers often takes hours, days or even weeks, resulting in delays in certification, late deployment, reduced credibility, added costs and lost revenue for network providers.

The WaveJudge 4900 architecture supports four independent ports. Each can be configured as either a receive (RX) or transmit (TX) port, supports AGC to allow accurate reception of DL/UL signals with a wide range of power levels, and has its own radio and internal resources. In addition, the ports can be driven either from the same or from separate low-noise highly accurate oven-controlled crystal oscillators (OCXOs), providing maximum flexibility in test configurations requiring multiple ports, such as:

Check out the company and their products at: http://www.sanjole.com/index.htm

- meeting with Steve Caliguri of Acorn Technologies. Steve is now out in sunny La Jolla California but he's an ex-east coaster with plenty of knowledge about the microwave industry nestled on and around Route 128 in Massachusetts. As VP of Biz dev, Steve wanted to introduce me to the company's HellaPHY technology a set of advanced signal processing algorithms designed to improve the reception of OFDM, the digital modulation scheme of WiMAX, LTE and Wi-Fi by significantly improving the channel estimation.

HellaPHY allows for equal-or-higher modulation-coding sets at any given point in a cellular network. For example, at some location a modem using a conventional OFDM PHY may only allow for QPSK due to high mobility and interference from other users. At this same point in the cell, a modem using an OFDM HellaPHY™ can allow for higher-rate 16-QAM or 64-QAM. Such gains in capacity can greatly impact an operator’s bottom line, and such improvements in data rate allow for attractive product differentiation.

- met with Skyworks and Thomas Richter, Sr. marketing director for Front-end solutions. I run into Thomas yearly at MWC, he is a knowledgable and colorful guy with no shortage of opinions about technology and market trends... and the shortcomings of his competitors, which we will keep off the record. Its always a pleasure to spend some time with Thomas and so I was happy to save this meeting for the end of the day, when I wouldnt have to rush off to another meeting.

The company's big show announcement was the introduction of a new family of antenna switch modules (ASM) for dual- and triple-mode smart phones, tablets and datacards. These devices are based on both gallium arsenide (GaAs) and silicon-on-insulator (SOI) technologies, targeting a wide range of applications from low-cost 3G handsets to HSPA+/LTE-enabled datacentric devices such as high-end smart phones, data dongles and tablets, all of which require design flexibility, high performance and cost-effective architectures.

The short of our market conversation was that the RF front-end for mobile device market is extremely strong with enormous growth potential and fabs cranking at full speed to keep up with demand.