We use cookies to provide you with a better experience. By continuing to browse the site you are agreeing to our use of cookies in accordance with our Privacy Policy.
×
Home » Blogs » 5G and Beyond - National Instruments » NSF Announces Important Milestone in its Platforms for Advanced Wireless Research Effort

5G and Beyond - National Instruments

Lead by James Kimery, various experts from National Instruments cover the latest research and activities going on in the race toward 5G advanced communications systems.
4G/5G/Cellular

The National Science Foundation (NSF), along with an industry consortium of 28 networking companies and associations that includes NI, announced the first two Platforms for Advanced Wireless Research (PAWR) initiative awards. The two platforms will be led by teams from the University of Utah, Rice University, NYU, and Rutgers University. The teams will create the largest wireless test beds in the United States through a combination of government and industry funds totaling $100M. The goal? Advance the state of the art for wireless technology beyond today's 4G, LTE and emerging 5G capabilities.

The first team, which will deploy in Salt Lake City, is being driven by the University of Utah and Rice University. They proposed the Platform for Open Wireless Data-driven Experimental Research (POWDER), a partnership between the University of Utah, Salt Lake City, and more than a dozen other public and private organizations. In conjunction with POWDER, the Reconfigurable Eco-system for Next-generation End-to-end Wireless (RENEW) project led by Rice University will leverage Rice’s Argos, a large scale Massive MIMO array to provide a large-scale antenna array capability to the heterogeneous test bed capable of operating from 50 MHz to 3.8 GHz.

For the second award, the NSF selected a team made up of researchers from Rutgers University, Columbia University, New York University, and the University of Arizona who proposed Cloud Enhanced Open Software Defined Mobile Wireless Testbed for City-Scale Deployment (COSMOS). The team is partnering with New York City, Silicon Harlem, City College of New York, University of Arizona and IBM, to bring this advanced wireless test bed to life in New York City. The test bed will cover 1 square mile in a vibrant, densely-populated neighborhood in West Harlem. The technical focus of the COSMOS platform is on ultra-high-bandwidth and low-latency wireless communications, with tightly coupled edge computing, a type of cloud computing enabling data processing at the edge of the network. COSMOS will pursue millimeter-wave radio communications and dynamic optical switching technologies.

Both test beds will make use of software defined concepts and in particular software defined radio (SDR) technologies from NI as a core component in both base station (BTS) and User Device (UD) capabilities. NI’s SDR technology is fully programmable and flexible to lower adoption costs and facilitate an ecosystem of collaborative research targeting academia and industry alike. 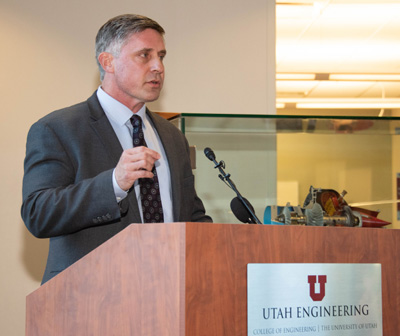 The Power of PAWR

What sets PAWR apart from other public/private funding of experimental wireless research is the unprecedented size and scale of these test beds. Both test beds scale wide geographic regions and will enable early-stage research that will push forward new wireless devices, techniques, protocols, and services. The NSF also has plans to fund two other test beds in the future.

I had the pleasure of speaking at the POWDER/RENEW platform launch event in Salt Lake City and am excited to see the impact these teams will have on the future of wireless technology (photo courtesy of Glenn Ricart). These research platforms will allow promising technologies to move quickly to market, provide hands-on practical training to a new generation of students, increase job opportunities, and support overall U.S. economic vitality.