We use cookies to provide you with a better experience. By continuing to browse the site you are agreeing to our use of cookies in accordance with our Privacy Policy.
×
Home » Magnetically Tunable U-Slot Microstrip Patch Antenna Based on Nematic Liquid Crystal Materials

A reconfigurable U-slot microstrip patch antenna uses a nematic state liquid crystal (LC) mixture operating at 5 GHz for wireless communications such as Wi-Fi. An external magnetic field from 0 to 1200 Oersted changes the relative permittivity of the LC to adjust the patch resonant frequency. A tuning range of 200 MHz in both measurement and simulation is demonstrated with a maximum gain of 4.05 dB. LC is considered a good candidate for reconfigurable antennas due to its low cost, low profile and performance.

Wireless communication has evolved to become a necessary aspect of our daily lives. At the same time, the growth of the market has led to an increase in the number of standards allocated to systems and terminals operating on different frequency bands. This multiplicity of communication standards typically requires the use of several antennas, each dedicated to a specific band. This, however, implies an increase in the physical size of the system with a significant impact on its cost, energy consumption and complexity. Alternatively, the use of a reconfigurable antenna operating over several frequency bands enables reduced size, power consumption and cost.

A patch antenna has many advantages, such as low weight, moderate cost and ease of manufacture. Nevertheless, for some applications, its bandwidth is too narrow. This limitation can be overcome by making it reconfigurable using lumped elements such as PIN diodes,1 varactor diodes,2,3 RF MEMS switches4 or tunable materials such as ferroelectrics5 and LC.6-13 The possibility of changing the LC dielectric constant in its nematic state through an applied electric or magnetic field has attracted researchers in the microwave community for some decades.

In this work, a patch antenna is designed, using the characteristics of LCs to add reconfigurability. The nematic state LC mixture E7 is injected between the patch antenna and ground. Simulation and measurements demonstrate a tunable range of 200 MHz, with the application of a magnetic field, and a peak gain of 4.05 dB. 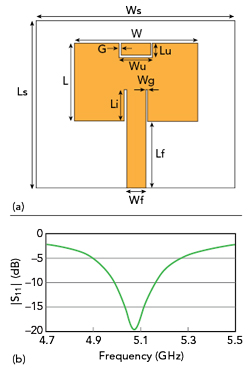 Figure 2 Microstrip patch antenna without LC (a) and simulated |S11| (b).

where fc is the center frequency and εreff is the effective permittivity.

where h is the thickness of the dielectric substrate.

∆L, the extended incremental length of the patch, is calculated from 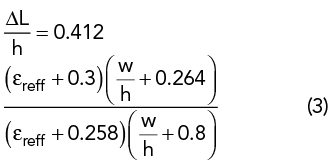 The effective length is determined by

The actual length of the patch is determined by

The final dimensions of the design are listed in Table 1. 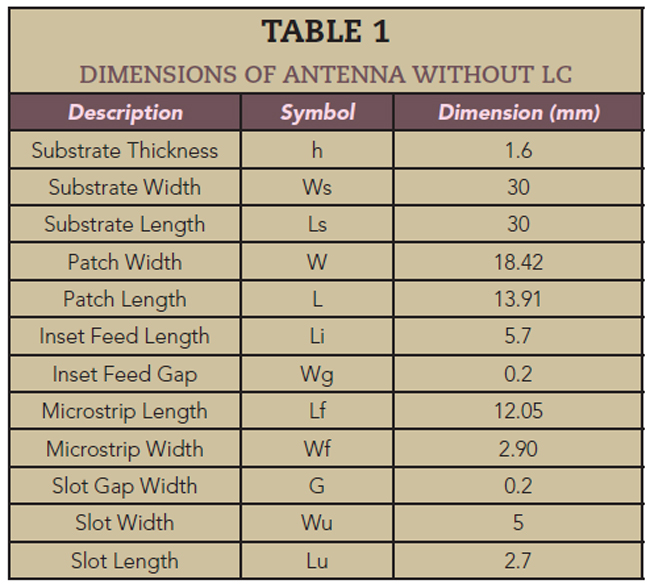 Figure 2b shows the simulated reflection coefficient, where |S11| reaches a value less than -19 dB at the resonant frequency of 5.07 GHz. The simulated radiation patterns without the LC (see Figure 3) show a maximum gain of 2.28 dB and a directivity of 6.80 dBi at 5.07 GHz. 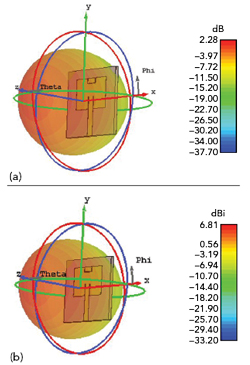 Figure 3 Simulated 3D gain (a) and directivity (b) at the 5.07 GHz resonant frequency.

The LC E7 mixture in its nematic state, i.e., as a liquid material, is injected into a cavity created above the ground with a depth of 1.5 mm on the substrate, and the upper and lower contact surfaces of the LC layer are covered by a microscopic polyamide film (see Figure 4). Following a parametric study to determine the best position for the cavity, the LC layer is placed under the patch. The dimensions of the LC layer are listed in Table 2 and its electrical characteristics are summarized in Table 3. 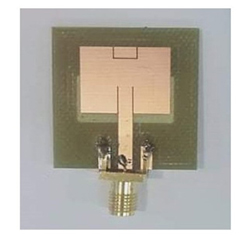 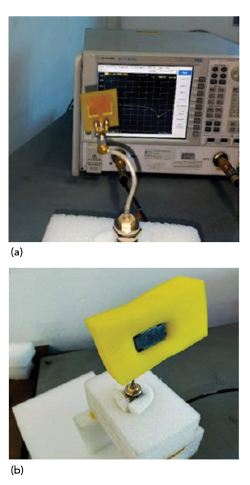 Figure 6 Test set-up for the prototype antenna without (a) and with (b) an applied magnetic field.