We use cookies to provide you with a better experience. By continuing to browse the site you are agreeing to our use of cookies in accordance with our Privacy Policy.
×
Home » Design of High Performance Microwave and mmWave MMICs for Aerospace & Defense
Aerospace and Defense Channel

This article describes how trends in the aerospace and defense (A&D) industry drive power amplifier (PA) design and how device models can accurately predict the performance of GaN PAs to keep pace with increasing demands. These models are consistently verified and validated through stringent practices as RF device process technology evolves.

GaN-based power transistors have been rapidly adopted in an array of commercial, industrial and military applications for their superior performance in PAs. These devices can reduce solution size with increased power density at comparable or even lower system costs than traditional solutions. GaN solid-state PAs have been replacing other technologies such as traveling wave tubes, GaAs MMICs and laterally-diffused metal-oxide semiconductor (LDMOS) transistors in military radar applications with their ability to provide higher peak powers with wider pulse widths and broader bandwidths. This trend is seen across a multitude of applications, from satcom systems to active electronically scanned array (AESA) radars and electronic warfare systems. To fully exploit the intrinsically beneficial characteristics of these devices, RF/microwave design engineers rely heavily on their respective nonlinear models.

PESAs are electronically “steered” by adjusting the beam of many radiating elements, using passive attenuators and phase shifters, all of which are connected to a single transmit or receive path. A high power pulse from a central transmitter is routed through a single path and emitted from the antenna array and is then rapidly switched to a single receive path to amplify echoes from the desired target.

Unlike MSAs and PESAs, AESAs enable graceful degradation due to a diversity of transmit/receive paths, making them less susceptible to catastrophic common-mode failures. Like PESAs, AESAs are composed of multiple radiating antenna elements, enabling electronic beam steering by controlling the phase and amplitude of each element; however, each element in an AESA is an active transmit/receive T/R module with a PA for transmit and a low noise amplifier for receive. This system design not only customizes the strength and radiation pattern of the beam (e.g., sharper beam with a narrow beamwidth) but can also simultaneously search, detect and track multiple objects from different directions and at different heights.

Figure 1 MSAs with rotating antennas and single beams are being replaced with multi-beam AESAs.

AESAs rely on strict amplitude and phase consistency due to the complex beamforming techniques employed, often using FPGAs for memory, processing and control. Efficiency and linearity are typically dictated by the type of modulation used in the signal to be amplified. These techniques enable real-time, simultaneous multi-object search, tracking, acquisition, identification, guidance and control with a near-instantaneous update rate (see Figure 1). This requires highly linear amplifiers with excellent amplitude and phase consistency.

These systems also have an inherent resistance to jamming, where improved beam shaping control enables considerable sidelobe suppression and a wide operating bandwidth allows the radar to hop along a wider range of frequencies. The wide bandwidth also enables a higher range resolution, a capability of increasing importance to distinguish between two or more targets on the same bearing.

Demonstrations of the intrinsic merits of AESAs over MSAs and PESAs in military radar are plentiful. The evolving requirements of advanced AESA radar systems, however, put strains on both the transmit and receive chains. Wide bandwidths enable high range resolution and wide pulse widths enable the radar to capture more information; GaN HEMTs and MMIC solutions have been adopted by the military over the past decade in L-, S-, C-, X-, Ku- and Ka-Band radar to achieve wider bandwidths and more power.

The design of ultra-broadband PAs often uses multiple transistors in a multi-octave PA design. This involves complex design considerations around realizing a proper matching network, as the optimum impedance varies with frequency. The impedance selected in each octave is critical for maintaining high gain and PAE. MMIC solutions typically involve the use of on-chip passive components that increase the chip area.

There are A&D applications such as satellite communications (satcom) that require the use of modulated signals (BSK/QPSK/OQPSK). These systems demand very linear PAs that often operate in the class (ABCF) or back-off class (ABCF) modes. GaN on SiC devices can be combined with sophisticated circuit architectures to achieve the necessary efficiency and linearity. These design methods include Doherty, envelope tracking and outphasing coupled with digital predistortion. To reduce a system’s size and resource consumption, the efficiency of the amplifier must be optimized while maintaining all other desired performance objectives. This is a challenge when having to back off an amplifier from saturation by several dB. These technical needs are ubiquitous across the frequency spectrum. 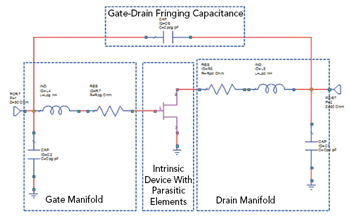 There are several factors that contribute to what might be considered a “good” nonlinear device model for the purposes of MMIC design, including:

Figure 4 I-V curves showing a reduction in saturation current and a consistent shift in threshold voltage at and beyond the quiescent point.

Device models can vary in form, feature, simulation engine, delivery format and design interface (see Figure 2). With each model, there is a tradeoff between accuracy and computational speed. The physics-based model, for example, predicts device operation under various conditions (e.g., applied bias, temperature, geometries and doping levels). This can quickly become a computationally expensive process, however, with less than straightforward parameter extraction.

For this reason, a compact model is preferred, in which nonlinear ordinary differential equations are used to represent the semiconductor device behavior. Still, this is a challenge; rational approximations must be made that execute quickly with no convergence problems. It is particularly difficult to achieve convergence for devices with dynamic physical phenomena such as self-heating and trapping. Trapping occurs at a high drain voltage where electrons are injected somewhere in the GaN HEMT heterostructure, resulting in a reduction in drain current.

Empirical models simulate device behavior by using mathematically fitted equations to observed device performance characteristics (i.e., I-V, charge/capacitance). They provide a middle ground between processing time and accuracy. These models can be used universally over a variety of platforms, from higher-level analysis tools such as SPICE-based circuit simulators to more complex CAD tools.

Wolfspeed employs an empirical-based compact model that considers the trapping behavior of GaN devices and is accurate over several bias conditions, sizes and geometries. Models are continuously validated with evolving GaN process technologies. Because the nonlinear model is not derived from device behavior, the accuracy of the fitting procedure is key. To better represent GaN trapping behavior, the model tracks the I-V behavior of the device with different drain biases. It accurately models the optimum power/PAE load lines with drain bias changes. This is critical to provide a reliable size scaling and bias dependency. The model has two main layers, intrinsic and extrinsic (see Figure 3).

The intrinsic model can be seen as virtual ports that act as voltage and current probes right at the die, while the extrinsic portion of the model includes packaging effects. The intrinsic model grants the ability to observe the voltage and current waveforms to verify the PA’s class of operation and to optimize device matching at the fundamental and harmonic frequencies.1