We use cookies to provide you with a better experience. By continuing to browse the site you are agreeing to our use of cookies in accordance with our Privacy Policy.
×
Home » CES 2022 Summary - Driving for Success
Industry News CES 2022 had several major companies pull out due to the continuing pandemic, so the event was subdued. The attendance was certainly down but had enough action to make it worthwhile for most companies. Even without many of the major automotive companies like BMW, Mercedes and GM, there was a host of new startup car companies showing off some remarkably interesting EVs. Even though these large car manufacturers were not there in person, they announced major new cars and trucks such as the new Chevy Silverado EV with impressive range and power. Chevrolet also announced upcoming electric versions of the Blazer and Equinox. Chrysler introduced the Airflow concept which is a very nice-looking EV that is named after a 1930’s car. The Mercedes-Benz Vision EQXX has a low drag coefficient of 0.17 and 600+ mile range but is only in R&D right now. Sony showed of the Vision-S 02, an electric SUV that serves as a bigger version of the Vision-S so still aspires to build cars. But BMW took the award for most interesting with the BMW iX Flow concept with a special electrophoretic wrap turns the iX into a moving E-Ink display with each body panel capable of shifting through shade of the grayscale spectrum. It can be white on hot days and black on cool days to maximize the temperature comfort level. There were also many companies displaying micro-mobility solutions such as electric bikes and scooters.

For the RF and microwave test companies, the automotive themed hall was a perfect fit for Rohde & Schwarz and Keysight to show off their expertise in radar sensor and cellular V2X connectivity testing:

Rohde & Schwarz demonstrated for the first time their new solution for automotive radar, the radar target simulator (RTS). The RTS stimulates radar sensors over the air interface and can be used for hardware-in-the-loop testing. Scenarios to be executed include laterally moving traffic. Their automotive testing solution includes the new R&S AREG800A automotive radar echo generator as a backend and the R&S QAT100 antenna array as a frontend. There are 92 antenna elements in each box and multiple boxes can be used for more channels. Up to 8 objects can be simulated at a time. The antenna frontend also can be fitted with a housing to shield out echoes and other unwanted signals, so no anechoic chamber is needed. The RTS replaces what was formerly a mechanical movement test, by now electronically switching individual antennas in the frontend on and off. This allows tests currently performed in real-world test drives to be relocated to the lab, enabling errors to be detected at an early stage and delivering significant cost savings.

dSpace was not in the same hall but also showing off the radar test bench, Essential 2D. It is a highly flexible test bench to perform component test, ADAS function tests and ECU validation. It can perform azimuth and elevation simulation for a single target. It can perform azimuth and elevation angle simulation and antenna pattern measurements. The OTA distance can be adjusted between 40 and 120 cm. Below is a collage of the R&S, Keysight and dSpace systems. 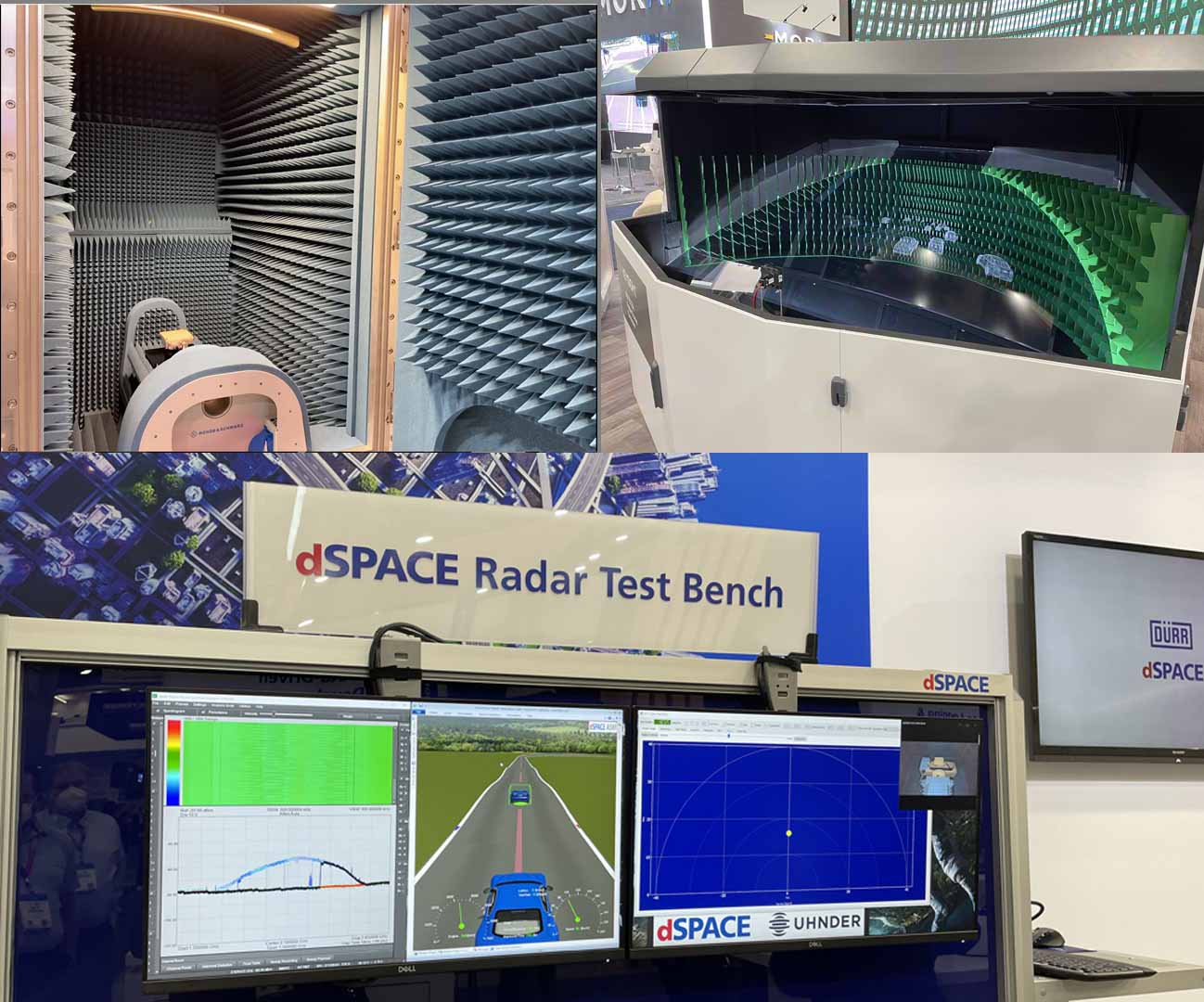 Arbe Robotics introduced the addition of Free Space Mapping to its imaging radar perception stack at CES 2022. Arbe has radically enhanced its solution with an algorithm that identifies the drivable sections in the environment surrounding the vehicle, while aggregating a map of the environment and localizing the vehicle within this map. This is the first time an automotive radar is able to contribute to Free Space Mapping, a critical function of autonomous driving that requires great accuracy and redundancy. The imaging radar complements camera sensors with its ability to sense doppler—the direction and velocity of moving objects, at long range and wide field of view, sensing the environment in all weather, lighting and visibility conditions.

Zadar Labs was not able to attend but we caught up with them virtually. They are introducing their third software defined 4D imaging radar sensor, zPrime, with a stunning range of up to 800 m. They said this is mostly made possible by a combination of machine learning and statistical signal processing algorithms. The zPrime has an FoV of 120 degrees in azimuth and 24 degrees in elevation with a resolution of 0.4 degrees. The best range resolution is 0.05 m and best doppler ambiguity is +/- 65 m/s. They couple their radar sensor with their zVUE radar vision & AI software that allows users to dynamically configure radar data, have access to data at any point in the signal chain, and apply Zadar's patented radar data processing algorithms for tracking, classification, and mapping using radar data.

There was exciting news for Uhnder as Fisker announced it Ocean SUV will debut the industry’s first Digital Code Modulation-based radar system using five units positioned around the vehicle to confirm and enhance what the cameras see. The system also provides an additional degree of perception in bad weather conditions and excessive sun glare, and performance superior to analog radar systems. The Digital Radar can locate vehicles at 200 meters (656 feet) and pedestrians at 80 meters (262 feet). The Uhnder Radar can separate objects from backgrounds and detect low-lying roadway obstructions better than today’s radar sensors. With its features working together, Fisker Intelligent Pilot’s perception stack with camera and radar sensor fusion will make better decisions at highway speeds, in city traffic, and in poor weather.

We came across another radar sensor manufacturer, Smartmicro. They make short, medium and long-range radar sensors for automotive and smart city applications. Their 4D radar products can have a range up to 175 m, have up to 130 degrees FOV and ultra short-range sensors can detect down to 0.1 m.

Many of the larger semiconductor companies like Skyworks, Qorvo and ADI did not attend as planned so missed catching up with them.

NXP introduced the first secure tri-radio device to support the Wi-Fi 6, Bluetooth 5.2 and 802.15.4 protocols. The IW612 enables seamless, secure connectivity for smart home, automotive and industrial use cases, and supports the new Matter connectivity protocol. The IW612 frees consumers from the restrictions of single protocol ecosystems, allowing them to enjoy seamless interoperability across different ecosystems and wireless network technologies. Additionally, developers benefit from NXP’s state-of-the-art coexistence capability, which enables simultaneous support of three radios on a single device, reducing costs and development time. Matter is a new standardized IoT connectivity protocol, designed by a consortium of industry leaders including NXP, to address the limitations of using different protocols by unifying how devices communicate, independent of the manufacturer or wireless technology. The protocol creates more connections between more objects, thereby simplifying development for manufacturers and compatibility for consumers. The highly integrated solution overcomes hardware coexistence challenges that developers face today, while also enabling advanced security protocols to help thwart the ever-increasing number of security threats faced by the IoT. The IW612 offers secure boot, debug and over-the-air firmware updates for ongoing protection, as well as WPA3 security and hardware encryption engines.

Mixcomm highlighted their recent advancements in mmWave solutions for various markets. The company is being acquired by Sivers Semiconductors and should close soon to form a powerful company that offers both licensed and unlicensed band solutions. Their recently announced 37-41 GHz antenna in package module is a highly integrated 5G beamformer phased array antenna solution that has a very small footprint of 15 x 15 mm for a 16-element dual polarized array. They can be tiled together to achieve higher powers. They plan to use these for low-cost repeaters in addition to 5G mmWave basestations and CPE. They have recently successfully tested the product with a major OEM.

Meta Materials Inc is a company that I had not come across before. They make transparent conductive films that can be used antennas or shielding depending on the size and spacing of the nano wires they place in a glass or plastic (flexible) material. The antennas can be designed for a wide range of frequencies from 400 MHz to 92 GHz. Their transparent films can block signal to shield something like a microwave oven window or can help them transmit through the film to reduce attenuation through windows in building or cars. The films are made using low-cost Rolling Mask Lithography so can met high volume applications. This technology could be very valuable in 5G and IoT role outs to reduce dead zones and improve mmWave penetration. 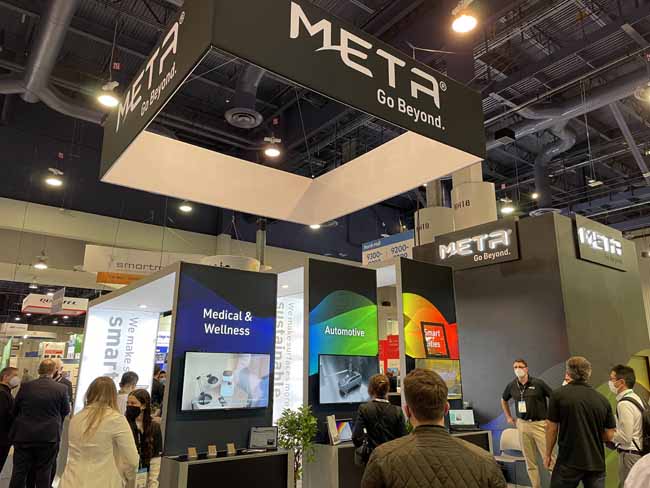 The Future of Transportation

Pete Buttigieg, US Secretary of Transportation, gave a keynote with Cristiano Amon, CEO of Qualcomm, about the future of transportation. Buttigieg talked about his 6 principles of Innovation for government to be agile and flexible to fund development and innovation in the country while establishing rules where needed in situations such as safety requirements. Amon discussed how 5G will change the form factor of the mobile phone and PC, democratizing computing power through the cloud (the phone may morph into smart glasses). He discussed how Qualcomm is building the digital automotive chassis as the car becomes a computer on wheels. Future cars will be connected, perform data analysis, be autonomous with safety functions and be part of the network communicating with lights, bikes and other cars. Qualcomm has clearly target automotive as next big market for them as they diversify. Here is a clip from the discussion where Amon discusses the impact of 5G.

Finally, the distance between Hall B at the Las Vegas Convention Center and the other main Halls A and C is a good 15 min walk. The best feature that CES 2022 had was the Tesla Loop which had Tesla cars picking people up one by one and driving them via an underground tunnel to the other side of the convention center. This only took a few minutes and since the attendance was down, there was NO WAIT! It saved my feet after I had blisters the first day from walking it. 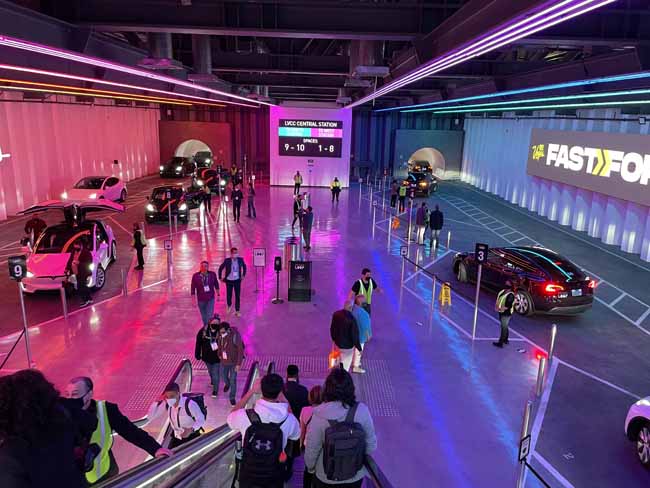