We use cookies to provide you with a better experience. By continuing to browse the site you are agreeing to our use of cookies in accordance with our Privacy Policy.
×
Home » Design of a Cobweb Shape Chipless RFID Tag

A nested octagon passive chipless radio frequency identification (RFID) tag with an encoding capacity of 12 bits has polarization diversity and 1:1 slot-to-bit correspondence. Its compact 23 × 23 mm footprint yields a bit density of 2.26 bits/cm2. The tag is fabricated on a flexible Rogers RT/duroid® 5880 laminate.

RFID is an evolving technology1 that uses wireless data capturing techniques for identifying and tracking objects.2 Due to its qualities such as inexpensive fabrication, non-line-of-sight communication3 and swift reading capability, it is largely replacing barcode technology.4 RFID is penetrating the retail industry for intelligent and smart tracking5 and for the creation of smart entities in IoT environments.6

Due to characteristically low-cost, robustness and miniaturized footprints, frequency domain chipless RFID tags have been of most interest to researchers. These structures may vary in their shapes, geometrical aspects and underlying technologies. Different shaped radiating structures have been reported, including spurline resonators,10 rectangular resonators,11 L- and I-shaped resonators12 and triangular patterns.13 Nijas et al.14 used stepped-impedance resonators. Frequency selective surface (FSS) inspired tags with an extensive physical dimension and with a ubiquity of active elements have been reported in the literature.15 Due to the existence of higher order spectral harmonics and a direct relationship between encoding capacity and physical size, electromagnetic performance is compromised. This hampers the use of a wide frequency band, since higher order harmonics may interfere with high frequency resonances.

In this article, a compact frequency domain dependent, polarization independent, chipless RFID tag with an encoding capacity of 12 bits is described. The design offers a 1:1 slot-to-bit resonance in its radar cross section (RCS) response. This provides an encoding capacity of 12 bits or 212 distinct possible combinations, for a total of 4096 items that can be uniquely tagged. 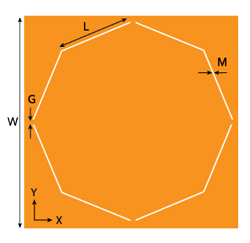 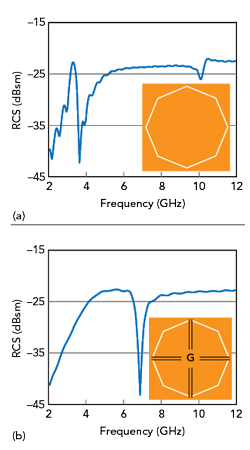 Figure 2 RCS response of a conventional (a) and truncated (b) octagonal slot resonators.

The tag occupies a small 23 × 23 mm footprint containing 12 discrete octagonal slot-based structures. A single resonating element is shown in Figure 1. The length of a side is L, the slot width is M and the gap width at the defected vertices is G. The tag is fabricated on an ungrounded 0.508 mm thick Rogers RT/duroid 5880 substrate. The RCS response of a conventional octagonal slot resonator with no gaps has an unwanted resonance, as shown in Figure 2a. The defective gaps G on alternate vertices suppress this response while enhancing the desired resonance (see Figure 2b).

The dimensional parameters were chosen after iterative parametric analyses. For example, as L is changed from 9 to 11 mm, the resonant frequency shifts down, where the slot width M varies the absorption level of each corresponding resonant peak. Changing the defective gap G has no effect on the RCS response, although it helps reduce mutual coupling between resonating elements. The surface current distribution and RCS response of a single element illuminated at 6.87 GHz are shown in Figure 3. The surface current distribution at opposite defective points G’ is maximum, indicating inductive effects and minimum at the other vertices G”, indicating capacitive characteristics. Their simultaneous presence indicates resonance. Geometrically, the tag is equiangular and equilateral, making it polarization insensitive (see Figure 4). The frequency signature of a single resonant element is identifiable with illumination from both E and H probes. 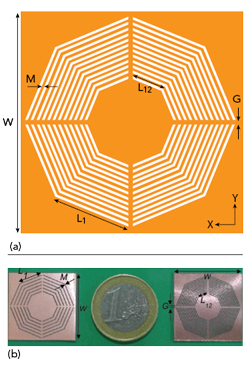 Symmetrical nesting of the elements results in a cobweb, polarization independent, chipless RFID tag (see Figure 5a). The FSS is designed to resonate at multiple frequencies, corresponding to the resonance of each slot. A resonant peak in the RCS response signifies a 1 at a given frequency; a 0 is represented by the absence of a resonant peak. Optimal dimensions of the structure were obtained iteratively through simulation using CST MICROWAVE STUDIO®. G and M for all resonators were kept equal. Parameters L2 through L12 were computed using L1 and M, resulting in the values shown in Table 1. Fabricated samples of the tags are shown in Figure 5b.