We use cookies to provide you with a better experience. By continuing to browse the site you are agreeing to our use of cookies in accordance with our Privacy Policy.
Home » Impedance Matching Methods for Additively Manufactured Integrated SMA-to-Waveguide Transitions

Additive manufacturing offers a cost-effective method for integrating coaxial sub-miniature version A (SMA) connectors with waveguides operating at X-Band. The integration of coaxial connectors into the waveguide designs via 3D printing eliminates the need for the external SMA-to-waveguide transitions and allows for customizable and tunable transitions that minimize impedance mismatch to meet specific design requirements. Placement of the coaxial connector in terms of depth and location is optimized for good match using simulation. The measured 3D printed connectorized waveguides demonstrate better than 20 dB return loss bandwidth of 8.6 to 10.4 GHz and 9.4 to 10.7 GHz for the air-filled transition. Moreover, implementation of a coupling iris as part of the coax-to-waveguide transition is modeled to achieve a broader match across the X-Band.

Waveguide components cascaded in an RF chain for satellite communication applications require coaxial-to-waveguide transitions for testing, and to connect to other components in the chain. The waveguide transitions used to interface these components in an RF chain can result in misalignment, losses and junction discontinuity.1 Additive manufacturing provides the ability to design lower cost, lighter weight and integrated waveguides. Moreover, it is important to achieve low return loss over the bandwidth of frequencies of operation, in this case X-Band.

The use of 3D printing to create waveguide and antenna structures has been extensively reported.2-12 Most of the designs presented in these papers do not include an integrated coaxial-to-waveguide transition, therefore encountering an additional cost and loss due to impedance mismatch at each transition on either end of the waveguide. Mirzavand, et al.11 presented a waveguide with a permanent coaxial cable affixed with minimal matching techniques. When connecting two of the cabled-waveguide adaptors together to form a through-waveguide, authors report a conversion loss of 2.1 dB collectively, and a conversion loss of 0.84 dB per transition at 10.29 GHz.11 Other authors12-14 integrated the coaxial connector with the waveguide for a more optimized transition using SMA probe depth and location for 3D printed waveguides,12 and in Yi et al.13 a four-step Chebyshev-response impedance transformer to achieve a return loss better than 30 dB across X-Band demonstrated through electromagnetic simulations.

In this article, methods are presented to improve on the 3D printed X-Band rectangular waveguides reported in previous work.12 Two methods are discussed for improved matching, the first summarizes the optimal SMA probe depth and location as was reported in previous work.12 Two designs were realized and tested: air-filled waveguides and dielectric-filled waveguides using the 3D filament, polycarbonate (PC).12 The second method describes the inclusion of a coupling iris to the input and the output of the waveguide as a parameter for optimization, allowing a wide band match across X-Band.

The combination of the SMA-to-waveguide transition into the waveguide design excludes the requirement of two additional external SMA-to-waveguide transitions, simplifying testing and minimizing impedance mismatch at either end of the waveguide and filter.12 This design approach can be applied to any waveguide or filter device at X-Band and it does not limit the user to any standard waveguide dimensions at the transition. The proposed methods are more compact in achieving a return loss of 20 dB when compared to other reported work.13,14

The four-step process for additively manufacturing the dielectric-filled integrated waveguides reported is illustrated in Figure 1.12 The structural material of the waveguides and filters, PC is 3D printed with a fused deposition modeling (FDM) printer using the Stratasys Fortus 450mc.16 The dielectric-filled waveguide is a solid print of the waveguide that is then coated with a seed layer and copper-electroplated. On the other hand, the air-filled design is a four-step process where the structure consists of a 0.508 mm thick PC shell and is printed onto SR-100 soluble support material consisting of acrylic copolymer.7 The air-filled design follows the same steps and with an additional step required for the removal of support material.12

MG 841 Nickel or MG842 Silver conductive aerosol coating17 is added to a thickness of approximately 0.2 mm, as shown in Figure 1, steps 2 and 3. The SMA connectors are then attached to the structure using MG Chemicals two-part electrically conductive silver epoxy.17 Copper is electroplated to a thickness of approximately 254 μm using a copper sulfate mixture with a plating rate of 7.6 μm/hr.12 Figure 2 illustrates the assembled dielectric-filled waveguide design’s complete process. Dielectric posts were included in the print to reinforce the coaxial connector’s contact with the waveguide. These posts occupy the clearance holes of the SMA connector resulting in an improved connection to counter the torque applied when connecting and disconnecting the SMA connector.12 The SMA connector chosen for this design is the Amphenol 13214718 which has two clearance holes resulting in two dielectric posts per connector. 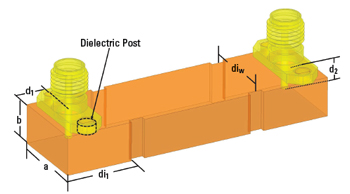 Figure 3 Image of the ANSYS HFSS® model that was used to determine the probe position, d1, and probe depth, d2, of the dielectric-filled waveguide. 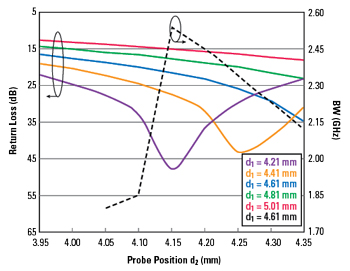 Figure 4 Simulation results for the return loss at 10 GHz (solid lines) and 18 dB bandwidth (dotted line) for varying probe values of d1 and d2 for the dielectric-filled waveguide.12

The waveguides designed in reference 12 were primarily focused on X-Band applications, so the dielectric-filled waveguide was designed to meet the lower cut-off frequency specification of fc = 6.56 GHz for a standard air-filled WR-90 waveguide. The 3D printed waveguide consists of PC material that has been estimated to have a εr = 2.5 and tan δ = 0.01 at X-Band.7 Therefore, the inner width and height dimension of the waveguide is a = 14.46 mm for fc = 6.56 GHz and b = a/2 = 7.23 mm.12 The length of the structure is 50 mm. The fabricated waveguides require input and output coupling structures to connect to standard SMA-connectorized components and/or equipment for cascaded RF link applications. These coupling structures are typically realized using coaxial-to-waveguide transitions.

Method 1 reported in reference 12 does not include coupling irises in the design. To determine the optimal location of the 50 ohm SMA connectors and maintain a sufficient return loss, the position and depth of the probes was adjusted using the electromagnetic solver ANSYS HFSS®.19 As shown in Figure 3, the probe position, d1, is defined as the length from the end of the waveguide to the probe center, and the depth of the probe, d2, is defined as the depth the probe extends into the waveguide. The probe is centered to the width of the waveguide to properly couple to the dominant TE10 mode of the waveguide. The probe position d1 is approximately a quarter of the guided wavelength, λg. The value of λg/4 = 6.29 mm at a frequency of 10 GHz with εr = 2.5 is used as a starting point for the probe position.12 The width, a, and the height, b, are also shown in Figure 3. The additional method for optimizing return loss includes the following parameters: iris width, diw, and iris position, di1.

The probe depth and probe position for an optimum match at 10 GHz for the air-filled waveguide were determined using the same approach used with the PC dielectric-filled waveguide, with the final optimized values being d2 = 6.35 mm and d1 = 5.4 mm.