We use cookies to provide you with a better experience. By continuing to browse the site you are agreeing to our use of cookies in accordance with our Privacy Policy.
Home » Drones Define New Combat Environment
Aerospace and Defense Channel The potential for drone military applications is nearly limitless, as modern drones reveal precise location, tracking and targeting applications. Acting as part of a coordinated swarm, they can adjust tactics in real time to gather intelligence or take on missions focused on individuals, assets or locations. For example, it was recently revealed that a drone swarm explored the grounds of Arizona’s Palo Verde Nuclear Power Plant in September 2019. Reports detail a group of drones examining the restricted area for two consecutive nights while security forces watched, unable to respond. This incident underscores the fact that drone swarms are already achieving mission success (see Figure 1). As conflicts and threat scenarios increasingly occur via drone, military agencies around the world are boosting their drone inventory as well as the intelligence and sophistication of those drones. 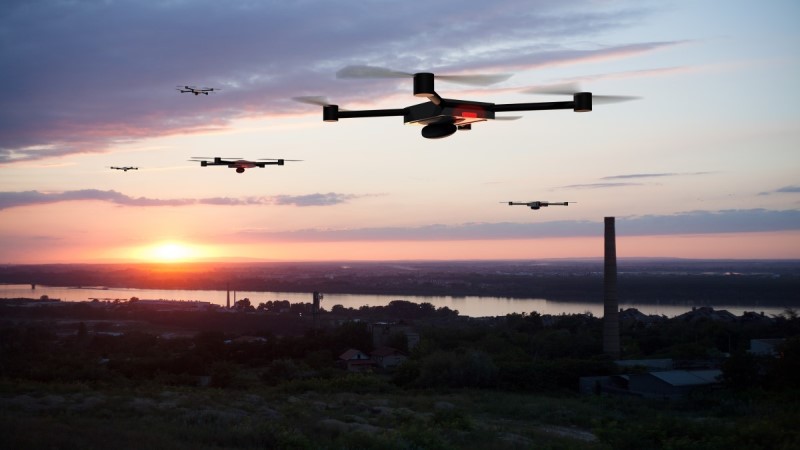 Fig. 1 As they incorporate machine learning, the nature of drone swarms helps them better respond to the environment, changing tactics as needed more quickly than if directed by a human operator.

Many countries seek to successfully employ drone surveillance at borders or around secure areas. Yet they also want the option to respond quickly to threats. Often, this will not be a one-size-fits-all solution. Depending on the application, drones range from miniature to multiple meters in length and height. They can be designed for short-range operations or long-range missions. With advancements in smaller, more sophisticated sensors, however, smaller and more affordable drones are increasingly being implemented for Intelligence, Surveillance, and Reconnaissance (ISR) missions.

As sensors evolved to provide enhanced capabilities in reduced form factors, smaller drones gained the ability to provide high resolution videos that rivaled the large drones of the past decade. Miniaturized, sophisticated sensors enable full motion videos packed with minute details. As a result, ISR missions can pinpoint people, objects they are holding, facial expressions and more. These imaging capabilities also boost the potential for pocket-sized drones, allowing soldiers to deploy them to attain a clear picture of what is inside a building. That information is automatically shared, eliminating the risk of a time delay as the intel is communicated. Drone sensing solutions also can be scaled by adding sensors to the payload if required for the mission.

TAKING IMAGING TO THE NEXT LEVEL

Given the impressive imaging achieved by today’s smaller drones, it is no surprise that the U.S. Air Force’s armed MQ-9 Reaper from General Atomics boasts a suite of visual sensors in the Multi-Spectral Targeting System. It integrates an infrared sensor, various TV cameras, a laser range-finder/designator, synthetic aperture radar and an illuminator. Video from the imaging sensors can be combined or viewed as individual streams. These features allow it to perform operations such as ISR, air support, combat search and rescue, target development and terminal air guidance. As an ISR asset, the United States Air Force (USAF) reports that it can support strike aircraft and ground commanders by acquiring or tracking dynamic targets or gathering other intelligence. Potential applications range from border surveillance to weapons or narcotics tracking as well as disaster assistance.

At 11 meters long and 3.8 meters high with a wingspan of 20.1 meters, the Reaper is certainly an example of a large drone. According to the USAF, this mid-altitude (up to 15,240 meters) drone boasts long endurance with a range of 1150 miles and the ability to handle multiple missions. The USAF proposed the MQ-9 Reaper to support overseas contingency operations. It attacks targets, disabling or eliminating them. The Reaper’s impressive features allow it to succeed in dynamic situations, where conditions around targets or subjects are so often fluid. With its ability to “loiter,” it can linger until it is time to act without being detected. Its multi-mode communications suite helps to ensure communications despite risks of jamming, interference or other failure.

The Reaper is an impressive example of the many capabilities now integrated into drones. Yet this large unmanned aerial vehicle also represents a rather easy target. Given the rate of technology advancement, its next-generation successor may be able to match its performance and capabilities in a much smaller size. Another possibility is to handle ISR and other missions with a swarm of drones rather than a single unit.

A drone swarm amplifies the already impressive capabilities of a single drone. Even if each drone offers less sophisticated performance features, a swarm offers the security of backup systems and the ability to attain image details from different vantage points, building a more complete picture. In a drone swarm, multiple systems form one unit in which they coordinate their actions. With the addition of machine learning or artificial intelligence (AI) capabilities, the swarm can continuously evolve and eventually make judgments and decisions on its own to ensure mission success.

The goal of OFFSET is to provide tools to quickly generate, evaluate, and integrate swarm tactics into field operations (see Figure 2). To accomplish these goals, DARPA plans for OFFSET to develop an active swarm tactics development ecosystem and supporting open systems architecture, including: 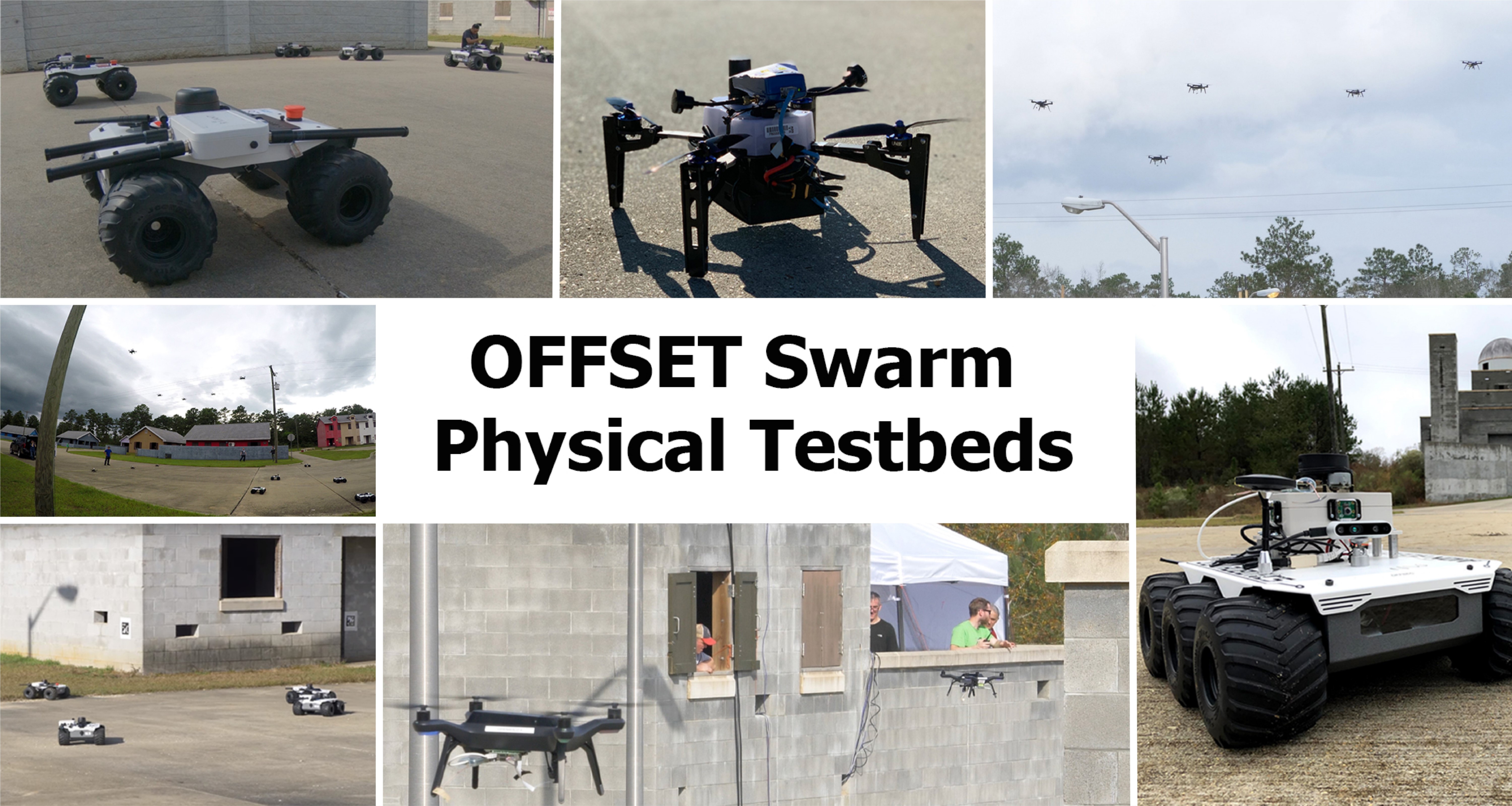 DRONES THAT REACT IN REAL TIME

Electromagnetic (EM) spectrum operations increasingly emphasize or uncover the limitations of humankind in responding to EW scenarios. Programmers simply cannot evolve tactics with sufficient speed and precision, given the unpredictable and ever-changing nature of the environment. In addition, numerous variants in adversary strategy and evolving environments could lead from manual development to system or tactical failures. Taking the humans out of the equation with biology-inspired algorithms and deep machine learning, tactics in the OFFSET program help swarms achieve and adapt to mission objectives. Charles River Analytics is augmenting the OFFSET simulators to model swarm performance in a range of demanding urban environments as part of the OFFSET program’s Fourth Swarm Sprint. 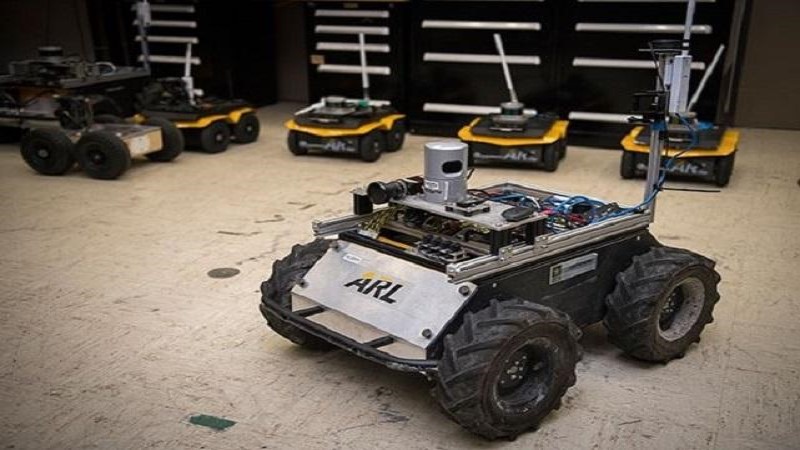 The Army funded this effort through the Director's Research Award for External Collaborative Initiative, a laboratory program to stimulate and support new and innovative research in collaboration with external partners. Members of the partnership include Dr. Jemin George, U.S. Army Combat Capabilities Development Command's Army Research Laboratory, together with Professor Aranya Chakrabortty from North Carolina State University and Professor He Bai from Oklahoma State University. The project’s goal is to overcome the large-scale, multi-agent reinforcement learning problem by which learning schemes can only be applied in a centralized manner.

Specifically, this research seeks to develop a theoretical foundation for data-driven optimal control for large-scale swarm networks. Control actions will be taken based on low-dimensional measurement data instead of dynamic models. Called Hierarchical Reinforcement Learning (HRL), this approach decentralizes the global control objective into hierarchies including microscopic and macroscopic control. In experiments, it has cut learning time by as much as 80 percent compared to the centralized approach. The team is working to further improve the HRL control scheme by finding ways to minimize computation and communication complexity while limiting the optimality gap.

Just a short time ago, coordinated actions by drone swarms seemed like futuristic plots in superhero or futuristic sci-fi films. Yet reports of incidents like the one at Arizona’s Palo Verde nuclear power plant underscore how drone swarms are already successfully deployed for various missions. Such incidents represent new threats in the continuously evolving EW environment. A drone swarm performing such surveillance could represent the worst intentions of a bad actor. Or it could be someone trying to steal intellectual property.

Compared to the few known instances of drone swarms or single drone incidents, so many more occur but are classified. For some time, however, futurists have predicted that drones would be the chief combatants in future conflict scenarios. As AI and machine learning are increasingly incorporated into these systems, they will respond and adjust their tactics in real time. In doing so, they will provide enhanced situational awareness for the military.

As forces around the world strengthen their drone capabilities, the goal is no longer simply ISR or imaging. Having a drone advantage will allow that military to dominate in the contested signal environment. In today’s warfare environment, battles are fought with information and technology that exist largely beyond the public eye. Instead of the manpower and weapons that dominated the battlefield of the past, today’s powers vie for superiority in the EM spectrum. Deployment of this technology often requires a physical vehicle like a drone.

With their ability to swarm, drones pose a connected, dynamically responding threat. The only way to respond to this threat is by carefully monitoring the environment, immediately detecting, identifying and tracking suspicious signals. Unknown signals should be recorded for later identification if necessary. In the modern EW environment, having the most sophisticated drone may not eliminate risk. It is more critical to attain a clear picture of the EM environment, pinpointing what players and signals you should be seeing, which ones are not behaving as they should, and which ones are unexpected risks.