We use cookies to provide you with a better experience. By continuing to browse the site you are agreeing to our use of cookies in accordance with our Privacy Policy.
×
Stay Connected :
Home » How Startups Are Shaping the Automotive Radar of Tomorrow
IoT/M2M/V2V Channel Automobiles are among the most complex products that humanity has ever made. Advanced driver assistance systems (ADAS) and, moreover, self-driving cars are even more sophisticated. Included technologies are: state-of-the-art software, AI mechanics, processors and hardware, and sensors that feed all algorithms with information about the environment.

Lidar is considered a primary sensor when it comes to self-driving cars. Production cars rely on cameras and radars basically due to their low price and robustness. We even may notice an indirect challenge between lidars and radars. Lidar developers are working on getting lidars cheaper and more reliable while keeping lidar’s ability to provide accurate and detailed data. On the other hand, radar developers are improving radars’ functionality to match lidar’s detailed output.

Conventional automotive radars have a long life cycle. It is ordinary to see a 5-year-old radar in a newly released car with some self-driving ability. And that radar will not differ much from the one made in 2010, and sometimes, in the 2000's. Basically, most automotive radars utilize 77 GHz range and use a linear frequency-modulated signal with some variations. There are some essential core technology breakthroughs which improve angular resolution: MIMO and electronic beam-steering to name a few.

Areas of Improvement
Radars are good at measuring distance and speed and they have good distance and speed resolution. Radars operate at night and have the least degradation in harsh weather conditions among other sensors. But they still have a relatively low angular resolution compared to cameras and lidars. Most developers claim they have achieved positive results in improving angular resolution. There are no set criteria, but high-resolution radars are called imaging, which means they provide data close to a camera image.

(From semiengineering.com, courtesy of NXP)

As an active sensor, radar emits signals and analyzes the reflections. Therefore, the so-called ’mutual interference’ can arise as a problem. It is when the radars operate within the same frequency range and receive other radars’ emitting signals as their own. This issue may lead to a low-level data corruption. Even though this may not be considered as a major problem given current radar’s penetration rate, the issue should not be left untreated for the future systems so companies are working on this problem.

Despite the claim that radars are the 2nd cheapest sensor on a vehicle after an ultrasonic one, there is a demand for even cheaper radars. Conventional automotive radars are estimated to be $50-100 a piece in large quantities, but there is a demand for a $10-30 radar. Future imaging radars are mentioned are more expensive, starting from $150 in mass production for a single unit and up to $1000 for a 360-degree set. The challenge is to keep the price within these limits or reduce it in future designs.

Future radars should provide more reliable data. This is a complex concept that includes improving false positive and false negative rates and increasing the overall signal to noise ratio. But these things often come along with the key challenges mentioned previously of interference and degradation from materials in front of the radar on the vehicle.

Most Tier-1 and Tier-2 radar manufacturers such as Veoneer (Autoliv), Bosch, Continental, Delphi, Valeo, etc., are developing new radars to overcome these challenges. Most major players do not like to disclose what they are currently developing. Therefore, we can only discuss their existing sensors. On the contrary, startups usually do not hesitate to tell us much more about their products.

For startups, let's highlight some of the major improvements we are likely to see in future radars. A radar may be divided into 3 major pieces, antenna feeder path, transceiver, and processing. Each of them may be improved.

Echodyne
The most comprehensive approach to building a radar with better angular resolution is antenna arrays of various types. These complicated antenna arrays used to be very expensive but new methods have been developed to reduce their cost. Echodyne has built its proprietary Metamaterial Electronically Scanning Array (MESA), which looks similar to classic antenna arrays and provides almost the same level of functionality. Recently Echodyne has disclosed some details about automotive 77 GHz radar’s features.

EchoDrive by Echodyne significantly differs from other automotive radars. Being 25 сm wide and 2 kg in weight, Echodrive is bigger than any typical 77 GHz vehicle radar. It is also a very powerful unit that consumes 80 W. One may see that even being simplified and optimized, MESA antenna remains an expenisve piece. The manufacturer claims it should comply with FCC rules and is being used in other applications.  Nevertheless, due to overall complexity,  it is unlikely to see an Echodyne radar in any production car in the near future.

The target market for EchoDrive is the self-driving cars. The maximum raw output is as huge as 250k points per second with a data rate of more than 2.5 Gbps. It must be reminded, that radar output is more complex than lidar’s, and contains velocity, signal ratio data as well as range, azimuth and elevation. Such amount of data is what self-driving cars expect.

The company is developing Luneburg lens based antennas. The idea of such lenses is known for years and Lunewave makes them closer to the market by using additive technologies and offering antennas for various bands (W-, Ka-, X-) . Lens antenna has the widest possible radiation pattern which may be useful for communications or 360-degree collision avoidance systems. The problem of measuring angles to an obstacle is solved by using a relevant amount of transmitting/receiving channels thus making a 3D electronic scanning array. Every channel has its own azimuth and elevation parameters, defined by the construction of the lens.

Analog beamforming systems have traditionally been expensive and their сomplexity grew with operating frequency. A Silicon-valley based Metawave claims it has built an analog beamforming antenna for a 77 GHz band that empowers a radar with scanning ability. Metawave’s radar is easily recognized by its metamaterial unit cell antenna. It is said to be built using conventional materials and should be affordable in mass production. Its construction squeezes signal power in narrow cones compared to wide ones in conventional radars.

Inside the radar there are proprietary Marconi 77 GHz phase controllers and mmWave integrated circuits. Along with Metawave’s proprietary calibration system they enable the transmit and receive beams to be steered in steps of 0.1º in the range of ±22º. Technically, the large amount of active elements technically allows it to reach an even wider steerable range, over ±60 degree both in horizontal and vertical planes.

As shown, it may be roughly compared to a beam constantly moving left to right with 0.1-degree accuracy. Thus giving the ability to distinguish obstacles by angle and measure angular dimensions. Analog scanning can make the radar more tolerant to mutual interference. The radar may be used as a part of a sensor fusion system, or as a standalone device. For the second case, Metawave is offering a proprietary AI platform that processes SPEKTRA radar output and performs real-time object classification and labeling.

The transceiver is the essential component of a radar. It sends and receives signals to/from the antenna and performs basic low-level operations with them. The configuration of a transceiver determines what particular radar type you have. If a radar has many transmitting and receiving channels, the transceiver chip is getting more complex. But it will allow one to drastically improve angular resolution using MIMO techniques which create many pairs of transmitting and receiving channels. It makes sense even if you have 10 such virtual channels. But what if you have 2000 of them? That’s what Arbe Robotics does. The company started with an idea of developing a multi-channel transceiver that has led to a 24TX/12RX channels configuration compared to conventional 2TX/4X or 3TX/4RX schemes. It required the use of the new FDSOI CMOS 22FDX technology by Global Foundries, which is more sophisticated than some CPUs with its 22 nm technology. Arbe has also made a processing chip that manages up to 48 Rx channels in combination with 48 Tx channels in real-time, generating 30 frames per second of full 4D image, with equivalent processing throughput of 3 Tb/sec. As claimed, mutual radar interference and false alarm problems are solved as well, but it is done with the software. These chips combined make a Phoenix radar, which should be capable of detecting obstacles up to 300 meters away with a decent angular resolution of 1 degree. These components are fully automotive-compliant. It means they are designed in accordance with the international standard for functional safety (ISO 26262), and the processor enables ASIL B qualification. 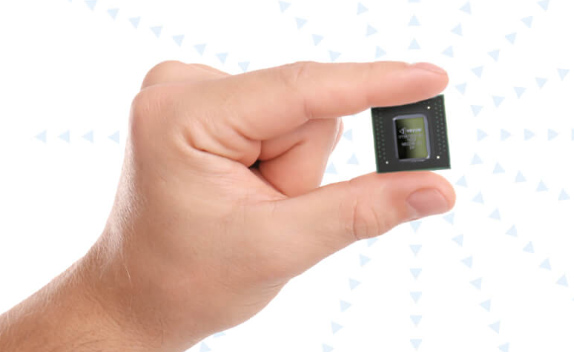 Another silicon prodigy, Vayyar’s RoC, has 72 transmitting and 72 receiving channels forming more than 2,000 virtual channels. It is truly an imaging radar making a 3D image of an object with high resolution. The limitation here is power. The developer has to provide an acceptable level of isolation for so many channels by, among other things, limiting peak output power of the radar. So Vayyar is focusing on in-car monitoring applications and short-range radar cases. There is a 60 GHz version of the leading 79 GHz chip aiming the  ADAS market, blind spot assistance in particular.

A nice example of a stunning commercial radar coming to market is Uhnder’s RoC (radar on chip). It is a 28 nm device with a 12TX/16RX channel transceiver with CPUs, DSPs, memory, and interfaces on a single piece of silicon. These numbers should not be directly compared to competitors. Uhnder uses its own software implementing phase modulated continuous waveform (PMCW) with digital code modulation (DCM) instead of a more common frequency modulated continuous waveform (FMCW) approach. It also helps to eliminate mutual radar interference by using almost unique phase-coded probe signals. 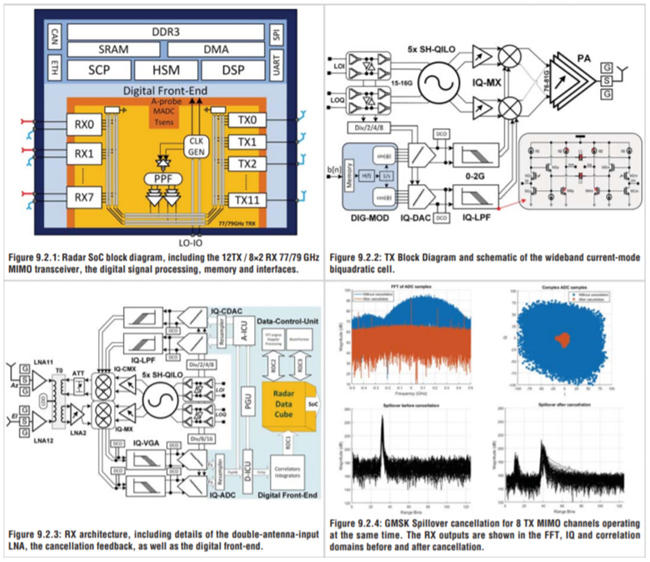 The scope of technologies and the approach are well explained in the 27-page whitepaper https://www.uhnder.com/images/data/DCM_Radar_for_Automotive_Application_Final.pdf on the website. The hardware looks much more complex than any commercially available radar to date with its sophisticated TX subsystem and software-defined hardware pipeline capable of up to 20 Tera-Ops baseband processing. On the other side, the secret sauce is the DCM modulation idea itself that led to such a design, and, hopefully, to a commercially successful product. Uhnder has already partnered with Magna to bring it to the market as Magna Icon Radar.

Unlike other companies, Oculii does not bring complicated hardware design to the market. The company is focused on its proprietary software. Being a partner of TI and Infineon, Oculii is using TI AWR and Infineon RASIC hardware respectively. Texas Instruments’ 60 and 77 GHz AWR family is widely used among startups that do not want to pay much attention to the hardware, but to put their processing into an already designed SoC. Infineon does not provide a system on chip, but its 77 GHz transceivers as well as Aurix platform are a pretty good start for a radar developer.

Of course, it puts certain limitations on what Oculii can do with a smaller number of TX/RX channels than Arbe or Uhnder. But Oculii’s Virtual Aperture technology, which might be a new synthetic aperture implementation, does the job. The radar has almost the same feature set as the others. Up to 250 m range, sub-degree angular resolution and 120-degree field of view. Oculii’s approach does not require costly hardware development and may be quickly deployed using existing automotive-grade components. Currently Oculii works with Hella on mass production radar.