We use cookies to provide you with a better experience. By continuing to browse the site you are agreeing to our use of cookies in accordance with our Privacy Policy.
Home » Overcoming challenges in RF power solutions for digital broadcasting
Industrial/Scientific/Medical Channel

The broadcasting industry is undergoing a period of fundamental change. Across Europe, the rollout of Digital Video Broadcasting - Second Generation Terrestrial (DVB-T2) transmitters continues and meanwhile, in the USA, the FCC has acted to address the looming spectrum crisis caused by the arrival of 5G, initiating a spectrum “repack” process and forcing many broadcasters to change transmission channels. At the same time, with the new ATSC-3.0 standard imminent, a large proportion of these broadcasters are likely to upgrade their transmitters while moving to their new channels, addressing multiple changes in one hit and ensuring that their customers do not have to rescan multiple times.

As the 5G rollout continues, other regions will have to face the need for spectrum allocation. These changes will fuel demand for new, higher-power and more efficient transmitters for many years to come. The radio frequency power amplifier (RFPA) is a crucial component in the transmission system, as broadcast operators’ costs depend on high-power amplifiers which can operate efficiently over the full UHF broadcast spectrum.

The three major factors currently driving change within the global broadcasting industry are the ongoing rollout of DVB-T2, the emergence of ATSC-3.0 and the TV spectrum “repack” in the USA and potentially other regions in the future.

The European Telecommunications Standards Institute has adopted a set of standards for digital broadcasting. The Digital Video Broadcast–Terrestrial (DVB-T) specification, published in 1997, was widely deployed around the world and drove the analogue switch-off in many countries. With spectrum becoming increasingly scarce in Europe, DVB released the updated, more spectrum-efficient DVB-T2 standard. Using orthogonal frequency division multiplex (OFDM) modulation with a large number of subcarriers, DVB-T2 is a very flexible standard, with the added advantage of enabling re-use of existing antennae. Initially published in 2009, DVB-T2 had been deployed in more than 12 countries by 2014, with Dataxis, a market research company, forecasting that 72% of European households will have access to DVB-T2 transmissions by 2022.

More recently, in January 2018, the Advanced Television Systems Committee (ATSC) announced the release of the ATSC 3.0 suite of standards, marking another significant milestone in the development of television broadcast systems. ATSC 3.0 comprises around 20 standards designed to support newer technologies, such as HEVC for video channels of up to 2160p 4K resolution at 120 frames per second, high dynamic range, Dolby AC-4 and MPEG-H 3D Audio, to name a few. ATSC 3.0 and DVB-T2 have many similarities, with both using OFDM and offering similar levels of performance and flexibility. While DVB-T2 is in widespread use, today ATSC-3.0 is just emerging, with the first TVs capable of receiving ATSC-3.0 transmissions expected in 2020.

In 2012, anticipating a future scarcity of valuable radio spectrum, the US Government authorized the Federal Communications Commission (FCC) to “encourage” broadcast TV companies to give up part of their spectrum. From the original 470 to 860 MHz broadcast spectrum, the upper frequency band above 600 MHz was made available for use by mobile wireless carriers. At the same time, the transmission plants were made ready for the new ATSC3.0 standard. To launch this process the FCC ran a first-of-its-kind incentive auction, which concluded in March 2017, resulting in 84 MHz of spectrum being cleared from channels 38 to51 and 70 MHz, paired in blocks of 10 MHz sold to wireless operators. With the auction concluded, FCC estimates that around 1200 TV stations will be affected by the process, each having around three years to move to their new, lower frequency bands. The overall “repack” plan is based on 10 phases, (see Figure 1) with staggered completion dates and designed to minimize interference to broadcasters during their transition. 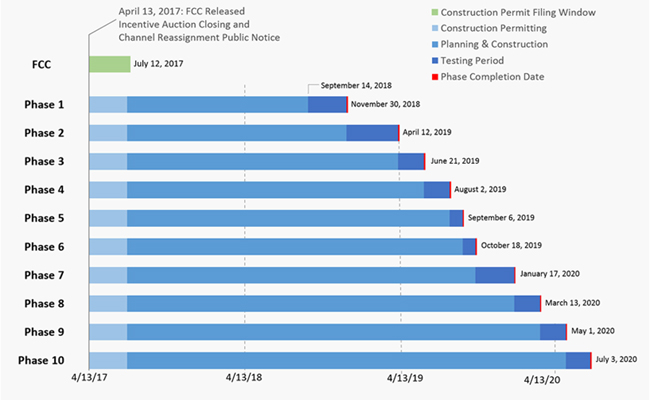 Repack will require many TV stations to change their transmission frequencies, which will require careful planning. If the station needs to transmit on both frequencies for a period of time, then a second antenna may be required with knock-on effects on transmission towers, other co-located antennae, HVAC systems, etc. In many cases, the broadcaster may find it more economical to replace the existing transmitter, particularly if it is older and not capable of supporting ATSC-3.0, due to power or other constraints.

The challenges of migration to DVB-T2, ATSC-3.0 and repack will lead to widespread replacement of TV transmission equipment in Europe, the USA and other regions as operators use up their frequency allocations.

A typical digital TV transmission chain includes a transmitter comprising two essential components, the exciter and the RF power amplifier (PA) (see Figure 2). The input to the system is the baseband signal by which the RF carrier is modulated in the exciter before getting amplified in the RF PA unit. Unlike the time- domain signal envelope for a modulated signal, which shows great variability in the envelope peaks, the average power level is constant and the average transmitter output power (TPO) determines the performance of a TV transmitter system.

In the years since they were first introduced, LDMOS based RF transistors have thrived as the mainstay solution for a wide range of PAs, particularly within the broadcast industry. There are two different interpretations of this fact. One is that it speaks about the high-efficiency and high-power aspects of LDMOS technology and secondly, the “dollars per watt” aspect, providing a cost-effective solution.

A typical station delivers 25 kW of average RF power by combining multiple amplifier units in parallel with a line- up of four or more amplifier pallets, a driver stage with two  “balanced” sections and a pre-driver in each of the amplifier units (see Figure 3). This emergence of high power LDMOS RF transistors in the last few years has created a paradigm-shift in high-power amplifier performance. From the early days of a few hundred watts, we are now seeing RF parts capable of handling well beyond 1.5 kW. Indeed, these transistors are fast gaining excellent pedigrees for high-power, high-efficiency, and a leading standard of extreme ruggedness across the RF industry. 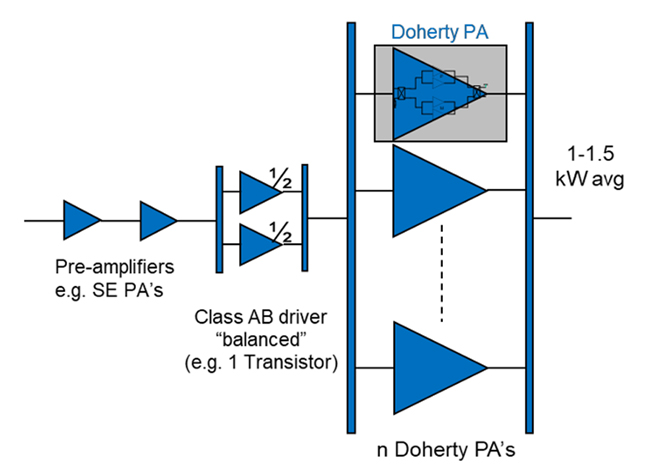 Advanced DVB-T2 and ATSC-3.0 standards are using OFDM signals, which impacts every part of the transmission chain, in particular the RF power amplifiers, as it requires a higher peak-to-average ratio (PAR) of ~8 dB to prevent saturation in the PA, with consequent subcarrier intermodulation and out-of-band interference. Whilst these problems can be addressed by backing-off the power of the PA, this reduces the efficiency, affects power consumption and has direct impact on electricity and hence operating costs.

The challenge for the RFPA designer is therefore to find the optimum trade-off of power against efficiency and to produce an amplifier that will be efficient across a wide range of operating conditions. Since many new transmitters deployed during repack may have to operate at the broadcaster’s old frequency before moving to the newly assigned one, it is essential to have an RFPA that will operate efficiently across the full UHF broadcast spectrum of 470 to 806 MHz.

The designer’s task has been facilitated by two relatively recent developments in RFPA technology: the successful implementation of higher efficiency and ultra-wideband Doherty (UWD) architectures, both symmetrical and asymmetrical, and a new generation of high-power LDMOS transistors, offering unprecedented ruggedness along with best-in class gain and efficiency.

Ampleon has invested significant resources in developing UWD reference designs. These solutions demonstrate how designs using the BLF888 (see Figure 4) can deliver 150 W average DVB-T power over the full 470 to700 MHz range. The BLF888 transistor family has already been very successful in the market, with many broadcasting manufacturers using the devices in their TV transmitter solutions as they prepare to meet the needs of the US “repack” programme and ATSC-3.0 rollout. 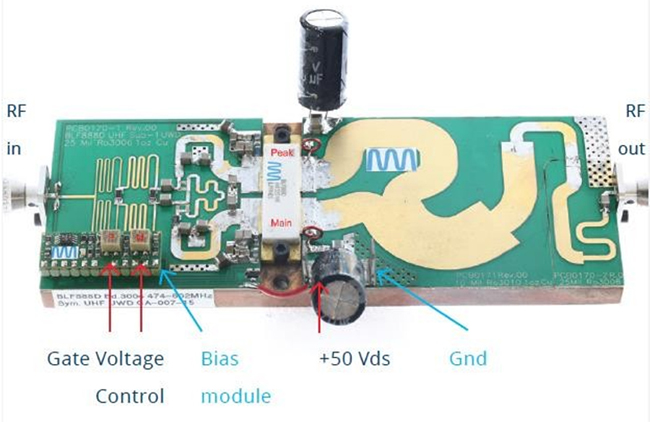 Based on the success of the BLF888 and anticipating the future demands of the market for even more power and efficiency, Ampleon has recently introduced its next-generation broadcasting amplifiers, the BLF989 and the BLF989E RFPAs. The BLF989 comes with the highest narrowband efficiency of up to 55% in DVB-T, 8K OFDM at extreme average power levels of 200 W (950 W peak) per transistor while covering 470 to 494 MHz. The BLF989E (figure 5) offers 180 W average power with a typical efficiency of 50% and has the benefit of covering an ultra-wide frequency band of 470 to 620 MHz. 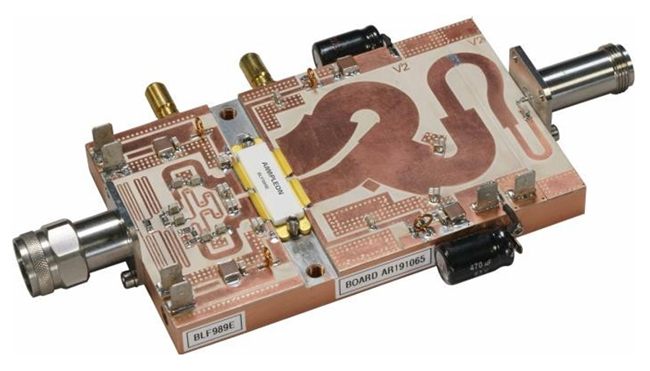 The BLF989E efficiency and power curves over Frequency (see Figure 6) are a demonstration of how this highest UWD efficiency can be enabled by a special a-symmetrical Doherty mode design. These new UWD high- efficiency amplifier solutions represent the most cost-effective broadcast RFPAs available, along with well- engineered innovative features that ensure the utmost in efficiency, bandwidth and reliability. 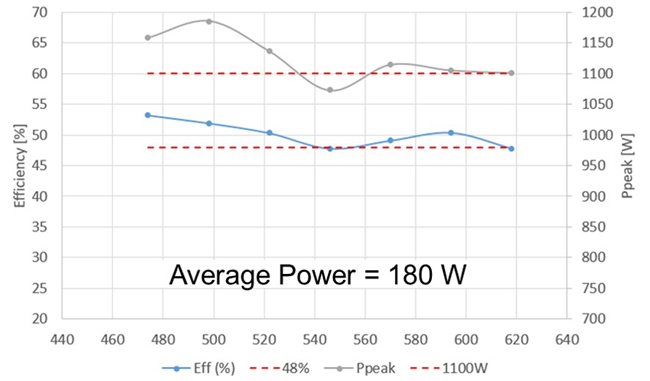 The ongoing rollout of DVB-T2, the emergence of ATSC-3.0 and repack are providing opportunities for manufacturers of transmission equipment as broadcasters upgrade their systems. This market is set to continue to grow as other regions must address the emerging spectrum scarcity. The advanced modulation schemes, such as OFDM, used by both DVB-T2 and ATSC-3.0, present specific challenges for the design of RFPAs, as higher power must be balanced with improved efficiencies, across the whole UHF broadcast spectrum. Recent advances in high-power LDMOS transistors and UWD architectures are addressing these challenges. The demand for increased power and efficiency is not expected to decrease any time soon and the disruptive conditions in the broadcast market will continue to drive the LDMOS price/performance curve while not compromising on quality.