We use cookies to provide you with a better experience. By continuing to browse the site you are agreeing to our use of cookies in accordance with our Privacy Policy.
Home » Electronic Warfare Market Redefining the Strength of the Defense Industry
Aerospace and Defense Channel Industry News

Electronic Warfare Market Redefining the Strength of the Defense Industry Warfare techniques have significantly evolved since the use of the first atomic bomb that was dropped at Hiroshima, Japan, in 1945. It was a conceived notion that a country with the most massive arsenal was the strongest. However, in current scenario, this holds true to some extent, there is an exponential growth in the use of electronics for modern warfare. The constantly evolving technology has resulted in the integration of advanced technologies for military applications that are used for electronic attack, electronic protection, and electronic support. Electronic warfare has evolved significantly over the past few decades and can be defined as any action that involves the use of electromagnetic or directed energy to counter an enemy attack. Electronic warfare includes electronic attack, electronic protection, and electronic support.

Per MarketsandMarkets, the global electronic warfare market which was estimated to be valued at USD 24.20 billion in 2017 is projected to reach USD 30.32 billion by 2022, growing at a CAGR of 4.61% between 2017 and 2022. Defense modernization programs and increasing procurement of advance electronic warfare systems are the major factors expected to fuel the growth of this market. The latest emerging trend in the EW market is the combination of cyber operations and electronic warfare capabilities to accomplish both defense and offensive capabilities. The concept of convergence indicates the consolidation of conventional and wireless commercial services and applications. The step of convergence was taken by the Department of Defense in July 2017, under which, the US Army’s Research, Development and Engineering Command’s Communications-Electronics Center (CERDEC) is making efforts to find out new ways to address the changing battlefield dynamics in this digital age. The new concept of Cyber Electronic Warfare (CEW) is the enhanced form of electronic attack to cover a broader range of the cyberspace and electromagnetic environment.

With increasing national security threats, the defense organizations of different countries are introducing various programs to maintain and enhance their electronic warfare. For instance, EW Capabilities Enhancement Act has been introduced in the US, which permits the use of appropriations authorized for electromagnetic spectrum warfare systems and development of electromagnetic warfare systems and electronic warfare capabilities. Such acts and programs are the trends driving the EW market growth.

Since 2014, China has been actively developing its hypersonic weapon capabilities with advancements in both Hypersonic Glide Vehicles (HGV) and hypersonic cruise missiles since 2014. The Chinese military is also testing the DF-17, a ballistic missile combined with an HGV. The DF-17 underwent two tests in November 2017 and is expected to be operational by 2020. The missile has an estimated range of 1,100 to 1,500 miles and can reach a speed of Mach 10, without losing any of its maneuverability.

One of the key technologies resulting in the growth of the EW market is the introduction of the next generation jammer. The new technology has been built with a combination of high powered, agile beam-jamming techniques, and cutting-edge solid-state electronics. The goal of the up-gradation of EW systems with this new technology is to present a platform for airborne electronic attacks that could adapt to the latest EW requirements, including suppression of enemy air defense, stand-off jamming, non-traditional electronic attack, self-protect/time critical strike support, and continuous capability enhancements.

The NGJ has been developed by The Raytheon Company to replace the US Navy's EA-18G's legacy ALQ-99 tactical jamming pod. The substandard reliability of the ALQ-99 and frequent failures of the Built-in-Test (BIT) have caused the crew to fly missions with undetected faults. The ALQ-99 also interferes with radars of aircraft, thereby reducing their top speed and imposing a high workload on the crew. To overcome these shortcomings, the NGJ has been introduced. It is intended to provide enhanced airborne EA capabilities to disrupt and degrade enemy air defense and ground communication systems. The system indicates a step change from ALQ-99 regarding its software-based digital architecture and use of high power active electronically-scanned arrays based on the gallium nitride technology. This will produce the most reliable, dependable, and affordable systems to deny, degrade, and disrupt threats while protecting the US and the coalition forces.

Companies involved in this market 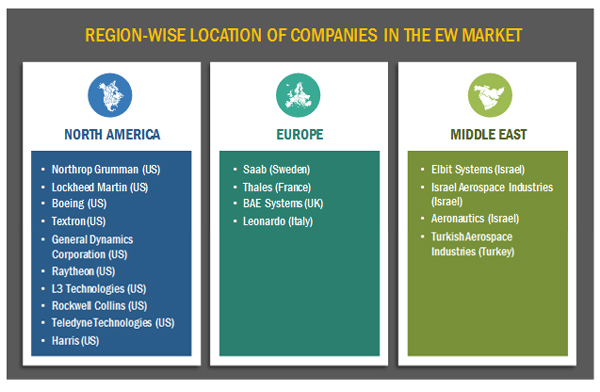 Lockheed Martin (US), Northrop Grumman (US), Harris (US), BAE Systems (UK), and Raytheon (US) are some of the key players operating in the global electronic warfare market. These market players focused on securing contracts to ensure their organic growth in the electronic warfare market in the coming years. The core competencies of these players include their widespread geographical presence and increased investments in R&D activities.

The Future of Electronic Warfare Solutions

Supporting the Warfighter: Adapting to the Changing Paradigm of the Defense Market