We use cookies to provide you with a better experience. By continuing to browse the site you are agreeing to our use of cookies in accordance with our Privacy Policy.
Home » Switches and Matrices Basics

From “Handbook of RF, Microwave, and Millimeter-Wave Components” by Leonid A. Belov, Sergey M. Smolskiy and Victor N. Kochemasov published by Artech House The full-fan-in matrix topology (see Figure 8a) allows for multiple simultaneous paths and for inputs to share outputs. Input signals are combined into a shared output.

Fig. 8 Diagram of a non-blocking (a) and blocking (b) matrix.

Solid-state switching matrices (see Table III) are manufactured as arrays of simple switches within a chip or an integrated microcircuit. Due to the large number (on the order of hundreds) of ports, the quantity of possible combinations of connections can be huge. 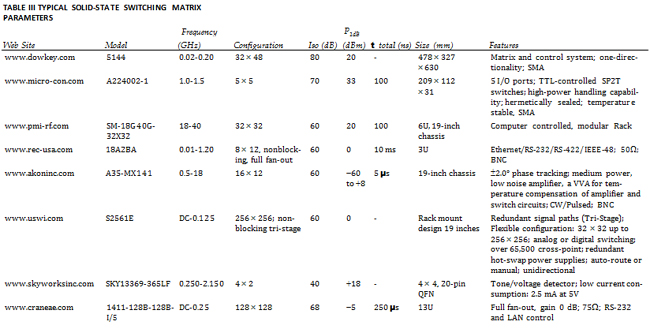 Coaxial electromechanical switches can be divided into two categories based on their architecture: latching and nonlatching relays. Latching relays are used for applications when long-term latched states are required and switching is not very frequent. Examples for such applications include the antenna switching for redundancy. In this type of application, the receiver/transmitter antenna switching is not frequent as they are either switching for redundancy or only when there is a need to transmit and receive at a different location or frequency.

For momentary switching applications, while performing automated testing, there can be a frequent need for changing the test ports to either switch input test signals or direct output test signals to another port. Nonlatching relays are suited for these kinds of applications, saving time in operation, as de-energizing of a coil is not required. Electromechanical switches are broadband, typically from DC up to 40 GHz. They can also handle high power, on the order of 100 W, over the operating frequency range.  Insertion loss can range from 0.2 dB to 0.6 dB and isolation can range from 50 to 90 dB. Switching time is 10 milliseconds and greater.

Electromechanical designs offer better insertion loss, VSWR, power handling, and isolation, but have slower switching times. Tradeoffs are in cost and mechanical dimensions. The cost is involved in machining the parts to certain dimensions, assembling, tuning the relay, and performing final tests. Electromechanical switches have larger mechanical dimensions due to minimum connector spacing requirements for isolation and power handling, magnetic coils, and the separation between them to operate desirably. Key parameters of typical designs are shown in Table IV. 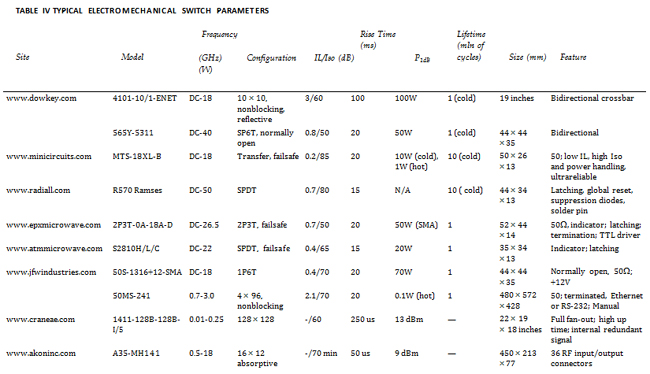 Among additional specifications for electromechanical switches are the following:

•     Influence of contact conditions on the value of current passing through them in the switching moment.

•     Level of external mechanical vibration and shock (according to stan- dards MIL-STD-202 and MIL-STD-883).

•     Application of circuit for signaling on the switch status.

•     Impedance of the input and output circuits (for example, 50 ohms and 75 ohms for coaxial switches).

•     Conformity to norms of environmental safety according the used materials.

•     Circuit for automatic drop into the initial state (the set-reset circuit).

The lifetime (number of cycles) of an electromechanical switch can be measured statistically on the basis of the increase of average transfer resistance of the closed switch dependance on the number of cycles. It can be on the order of hundreds of milliohms occurring after 10 to 50 million cycles. To increase the life cycle, the manufacturer may use various means such as replacing the springs with electromagnets, choosing more durable and wear-resistive materials, simplifying the construction and decreasing the number of moving parts. Handling power, Pmax, is limited in electromechanical switches by arcing, which decreases with increased operating frequency.

Most electromechanical switches are activated with a relay or a stepping motor. In models with embedded TTL drivers, there is additional circuitry required to match the input logic signals to actuator drive levels. Typical microwave parameters of such switches at 12 GHz are typically VSWR = 1.5:1, isolation of 40 to 60 dB and loss in the ON state of about 0.5 dB.

Waveguide switching devices have less loss in the ON state, increased isolation in the OFF state and can handle a high level of switching power. They function effectively in the millimeter-wave range as well. However, they have a narrow band of operating frequencies and are made of hard metal hollow waveguides. Electromechanical or ferrite circuits for state control are commonly used in such switches.

Parameters of some waveguide switches are compared in Table V. The usual types of waveguide switches are failsafe or latching, and the typical configuration is SPDT or transfer. Losses in the ON state do not exceed 0.05 to 0.1 dB, the isolation of the OFF channel is 60 to 80 dB, and the switching time is about 15 to 20 ms. Switching of continuous wave (CW) average power in waveguide switches is limited by disruption and arcing phenomena in the microwave lines. Pulse power is 20 to 50 times higher than CW depending on test conditions and construction. The typical guaranteed number of switching cycles is no less than 200,000 to 1 million. 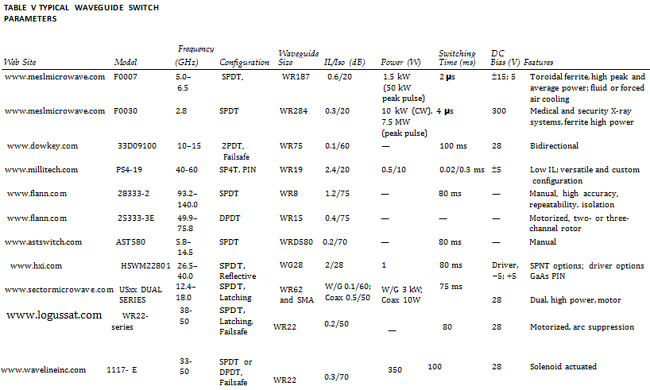 Microelectromechanical systems (MEMS) are an attractive alternative to solid-state technologies for the realization of RF switches since they offer low power consumption, improved RF performance, high isolation and linearity, a high degree of miniaturization, and reduced costs. MEMS switches hold an intermediate position between solid-state and electromechanical switches; they are well integrated with the other active semiconductor microwave components while having the advantages of mechanical switches, such as the absence of nonlinear distortion, high DC resistance in OFF states and low loss in ON states. Switching time is a factor of hundreds less than electromechanical switches as well. A great number of serial switching MEMS components (with capacitive or ohmic contacts) are offered and there are publications reporting the development of experimental switches with dimensions on the nano scale, i.e. nano-electromechanical systems (NEMS).

RF MEMS switches are electrostatically actuated cantilever beams connected in three terminal configurations. Their functionality is analogous to a field effect transistor, and the terminals are similarly labeled as source, gate, and drain. The electrostatic force pulls the free end of the beam (the gate) into contact with the drain. When the voltage is removed, the beam acts as a spring, generating sufficient restoring force to open the gate between source and drain, thus breaking the circuit. In multithrow switches, each throw is an independently actuated cantilever. RF MEMS switches provide high reliability, on the order of 100 billion mechanical life cycles which is on par with their solid-state and electromechanical counterparts. They also provide low insertion losses of less than 0.5 dB for frequencies up to 38 GHz. Isolation for a single switch is on the order of 20 dB, but higher isolation can be obtained with a combination of series and shunt switches contained within the same package.

The MEMS switch is usually implemented in a planar microwave construction on a silicon substrate (see Figure 9) created by a metal etching or evaporation process. A flexible metal cantilever has one end permanently connected to the input line. The other end may move under action of a static electrical charge to connect to the output line. After changing the switch state, the control can be eliminated, so that the hold-on current is equal to units of nano-amperes and power consuming by the switch in the hold- on condition is negligible. 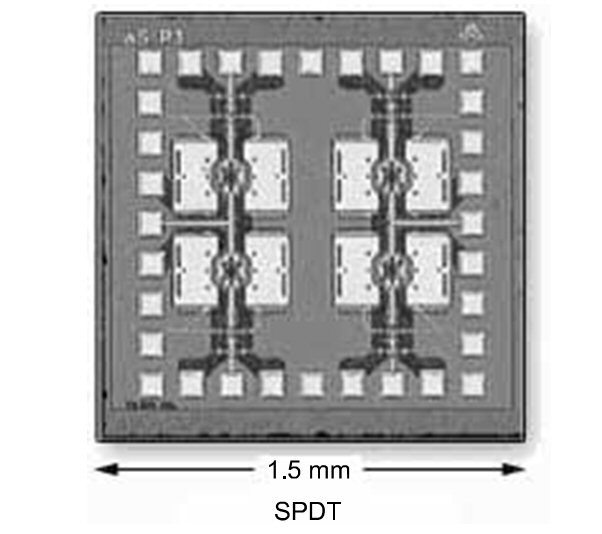 In the ON condition, the contact resistance is equal to parts of an ohm, which leads to insertion losses of hundredths of a decibel at 6 GHz. In the OFF condition there is a break in the transmission line with a capacity of tenths of a femtofarad, which provides isolation on the order of 60 dB. An example of a 6 GHz dual MEMS switch is shown in Figure 10.

The significant advantage of MEMS switches is that they use the same low cost/high volume manufacturing technologies as active solid-state elements and are easily incorporated into multi-function microwave integrated circuits (MMICs). In addition, MEMS technology has its own advantages:

2. Higher ratio isolation to and insertion loss as compared to diode and transistor semiconductor structures.

3. Practical absence of power consumption after contact closing and breaking.

5. Greater power handling (up to 30W) compared to semiconductor switches.

8. Fabrication cost less than that of semiconductor switches.

The main shortcoming is a lower switching speed (switching time = 1 to100 microseconds), which also depends on the contact state (i.e. whether the contact is making or breaking). Moreover, for the electrostatic control it is necessary to form the control voltage pulse (40 to 120V), and for magnetostatic control it is necessary to form the current pulse (10 to 100 mA) with duration from 0.5 to 500 ms. This increases the time interval between repeated cycles of switching.

A typical MEMS switch actuated at 20 V achieves better than 22 dB return loss and less than 0.7 dB insertion loss in the ON state from DC to 40 GHz; it provides better than 30 dB isolation in the OFF state. Typical parameters of serial MEMS switches and matrices are presented in Table VI.

Ferrite switches or relays have higher power handling and shorter switching times than electromechanical switches, higher power handling than PIN-diode switches and shorter switching times than rotary electromechanical switches. They may also provide polarization selectivity and directionality through the non-reciprocal properties of the ferrite material.

Some variants of the ferrite waveguide switches are shown in Figure 11. In Figure 11a, a ferrite circulator is used in which the direction of the magnetic field is controlled by a current pulse in the bias coil. In Figure 11b, a T-bridge, two 90 degree ferrite phase shifters and a directional coupler in a Butler matrix configuration are used to construct a toroidal SP2T switch. The T-bridge splits the incident wave into two directions with the same amplitude and phase. The phase shift by +90 degrees directs the output signal power to either the first or second output of the directional coupler. Functionality, which can be added, includes power splitting, polarization, and cascading of individual elements to create switch matrices.

Figure 11. Ferrite waveguide switches based on the principle of switching of polarity of the magnetic in a circulator: spst switch (a), sp2t switch (b). 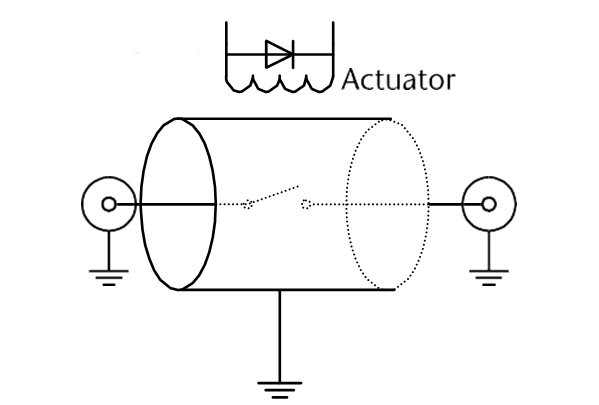 A radio frequency reed relay uses an electromagnet to control one or more reed switches. The reed relay comprises magnetically-controlled RF contacts enclosed in a vacuum sealed or inert gas filled container with an external actuating coil and driver circuit (see Figure 12).  The voltage required to initially close the relay and the voltage required to maintain it in a closed state are usually expressed as the pull-in and drop-out voltage, respectively. The time from coil de-energization time to contact opening or first contact closure is called the release time. Reed relays switch frequencies up to 10 GHz with powers up to 50 W. Switching times are greater than 50 ms.

Compared to electromechanical and MEMS relays, reed relays have longer lifetimes (up to 10 million cycles). Their advantages in the HF and RF bands are high insulation resistance to typically 1014 ohms and over 200 volts isolation across the contacts.  Rise times of 40 picoseconds are typical.

The figure of merit for a reed relay is

where R is the closed contact resistance and C is the open contact capacitance. The lower this product, the better the high frequency performance; typically for Reed relay RC is approximately 0.02 pF•ohms. The best available solid-state relays currently have pF•Ohm products equal to about 6 pF•Ohms. Reed relays have demonstrated mean time between failures of several hundred million to several billion cycles of closure at typical signal switching levels.