We use cookies to provide you with a better experience. By continuing to browse the site you are agreeing to our use of cookies in accordance with our Privacy Policy.
×
Home » Microwave Mixers Tutorial Microwave mixers translate the frequency of electromagnetic signals. This functionality is vital for an enormous number of applications such as military radar and surveillance, RF communications, radio astronomy and biological sensing. Despite their ubiquity, however, microwave frequency mixers remain some of the most misunderstood components in an RF/microwave engineer’s toolbox. This basic introduction provides insight into what some may consider the “dark art” of microwave mixers.

What is a mixer?

A frequency mixer is a 3-port RF electronic circuit. Two of the ports are “input” ports and the remaining port is an “output” port. An ideal mixer “mixes” the two input signals such that the output signal frequency is either the sum or difference of the inputs. In other words:

The 3 mixer ports are the Local Oscillator (LO) port, the Radio Frequency (RF) port, and the Intermediate Frequency (IF) port. The LO port is typically driven with either a sinusoidal continuous wave (CW) signal or a square wave signal. The choice to apply a CW or square wave signal depends on the application and the mixer. Conceptually, the LO signal acts as a “gate” or a “switch” in the sense that the mixer can be considered “ON” when the LO is a large voltage and “OFF” when the LO is a small voltage. The LO port is usually an input port. The other 2 ports of the mixer, the RF and IF, can be interchanged as either the second input or the output; the actual configuration depends on the application.

On the other hand, when the desired output frequency is higher than the second input frequency, the process is called upconversion, where the IF is the input and the RF is output, i.e.: 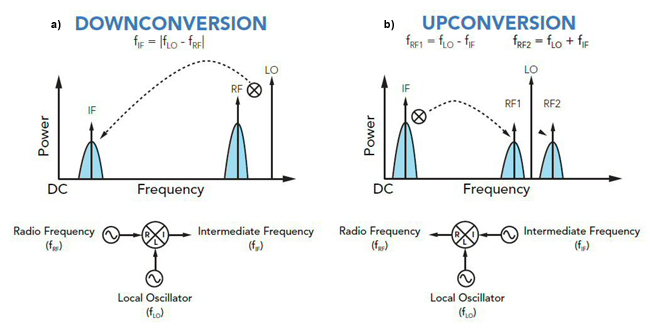 As Figure 1 shows, IF and RF signals tend to be information bearing signals (as denoted by the broadened spectra surrounding the RF and IF center frequencies). During frequency conversion, the information carried by the RF or IF signal is frequency translated to the IF or RF output. Therefore, mixers perform the critical function of translating information in the frequency domain.

In principle, any nonlinear device can be used to provide the “gate” function for a mixer circuit. As it happens, only a few nonlinear devices make “good” mixers. The devices of choice for modern mixer designers are Schottky diodes, GaAs FETs and CMOS transistors. The choice depends on the application. FET and CMOS mixers are typically used in higher volumes where cost is the main driver and performance is less important. For the more challenging applications, Schottky diode mixers are used almost exclusively. A Schottky diode a semiconductor diode formed by the junction of a semiconductor with a metal. It has a low forward voltage drop and a very fast switching action that enhances its mixer performance. For simplicity, the remainder of this discussion focuses on diode mixers, but the principles may be generally applied.

Figure 2. Simple single ended mixer (a) I-V characteristics for an ideal commutator (b) and a realistic Schottky diode (c).

The simplest mixer consists of a single diode as shown in Figure 2a with a large signal LO and a small signal RF combine at the anode. An “ideal” single diode mixer assumes that the LO is significantly stronger than the RF such that only the LO affects the diode’s transconductance. Also assumed is that the diode switches instantaneously as shown in Figure 2b. Devices with instantaneous transconductance switching are called ideal commutators and yield theoretically optimal diode mixer performance.

The “mixing” process is due to the switching response of the diode I-V curve to the strong LO signal. As the diode is opened and closed by the LO, the smaller signal RF is “chopped”. The Fourier components of the output signal from an ideal commutating (or switching) mixer diode (see Figures 3a and 3c) follow the relation:

where n is odd.

Unfortunately, the transfer function of the ideal commutator can never be achieved in the real world. Actual Schottky diodes possess some amount of “turn-on” transition as shown in Figure 2c. Moreover, the RF modulates the diode transconductance to some extent, even if the RF is very small. The combination of realistic diode I-V characteristics and transconductance modulation by the RF signal causes additional mixing products (often referred to as “spurs”). Thus real diodes produce all possible harmonic mixing components! The time domain signal and associated frequency spectrum generated by a realistic Schottky diode are shown in Figures 3b and 3d. Mathematically, the frequency components generated by a single diode are given by:

where n and m include all integers. 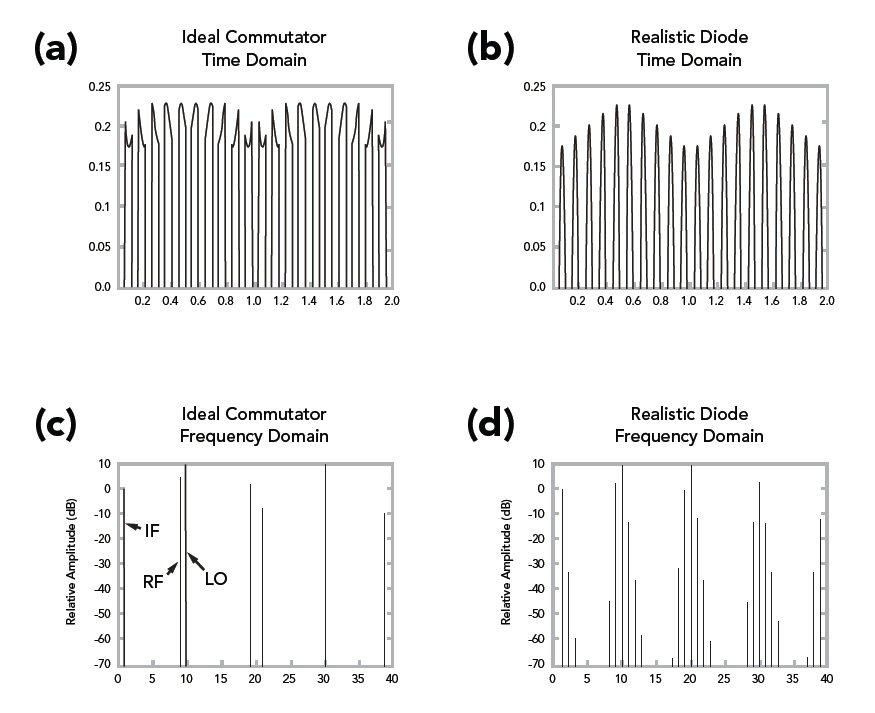 Because there is one desired output frequency (when n=1 and m=1), the existence of all other harmonic terms creates significant problems. Elimination of these distortion products is a key goal in mixer design.

1. “Mixing” is caused by the switching behavior of the diode.

2. The majority of unwanted harmonics are caused by nonlinear intermodulation of the RF and LO signals in the transition region of the diode; therefore, the best mixers use diodes that closely approximate ideal commutators.

3. The lower the RF power, the better the spurious performance (since the LO then controls the diode transconductance more effectively).

High performance mixers are designed using four or eight diodes. The evolution of the mixer circuit from the single diode unbalanced type to the multi-diode balanced type is described by Marki1 and summarized here. High performance mixers are designed using four or eight diodes and make use of sophisticated circuit designs with symmetry to create “balance”. In fact, virtually all commercially available mixers make use of some kind of mixer balancing. Mixer balancing offers several advantages: inherent isolation among all mixer ports (and hence band flexibility), cancellation of most intermodulation products, common mode signal rejection and improved conversion efficiency. Extra circuitry is needed to route and separate (i.e multiplex) input and output signals from the diodes. In single diode mixers this extra circuitry consists of a combination of passive coupling, power division, and filtering. It is difficult to create wideband single diode mixers with independent RF, LO, and IF bands since the multiplexing circuitry is frequency specific. Moreover, such circuitry causes extra losses that reduce mixer efficiency.

Figure 4. Schematic and I/O table for a 4-port hybrid junction.

To solve this problem, wideband single-balanced mixers with low loss and independent input and output frequency bands may be created using a classic four port hybrid junction. A hybrid junction (i.e. “magic tee” or the 180o hybrid), shown in Figure 4, is a two input, two output, four- port circuit that provides isolation between input ports and equal power division at the output ports. This isolates the input LO and RF sources from one another, thus providing frequency band independence and equal power division to the load. Note that the output signals are differentially phased (i.e. 180o phase shifted) when a signal is input to port 2. Output signals are in phase for inputs to port 1. The hybrid junction provides a natural method to create the single balanced mixer shown in Figure 5.

Additionally, two diodes are used instead of one. The key features of the single balanced mixer include:

1. Isolation (and hence frequency independence) between RF and LO ports.

2. 50 percent reduction in the total number of intermodulation products. 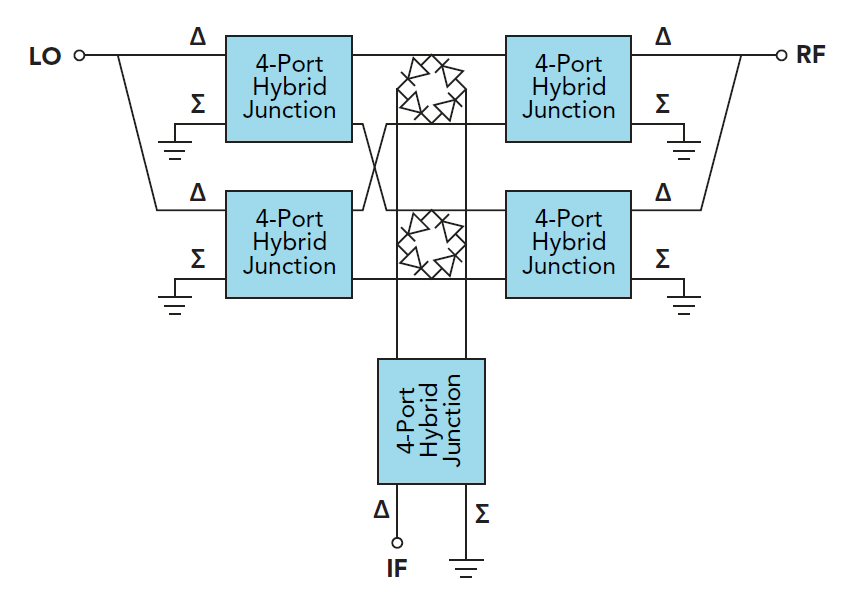 What makes a “good” mixer? Well—lots of things. Some of the criteria by which to judge, and ultimately choose, a mixer are:

The most important mixer metric is conversion loss, which is defined as the difference in power between the input RF power level and the desired output IF frequency power level, or

where PRF and PIF are in dBm and CL is in dB.

For example, if the input RF is -10 dBm and the downconverted IF output signal -17 dBm, then the conversion loss is 7 dB. The theoretically optimum conversion loss for a passive diode mixer is 3.9 dB and can be calculated using equations derived by Henderson.4 Typical values of conversion loss range from about 4.5 to 9 dB, depending on the mixer; the additional losses are caused by factors such as transmission line losses, balun mismatch, diode series resistance and mixer (im)balance. In general, double balanced mixers have less conversion loss than triple balanced mixers because of circuit losses. Another important trend is that wider bandwidth mixers tend to have higher conversion loss in part due to the difficulty in maintaining circuit balance over the entire bandwidth.