We use cookies to provide you with a better experience. By continuing to browse the site you are agreeing to our use of cookies in accordance with our Privacy Policy.
Home » Designing a Narrowband 28 GHz Bandpass Filter for 5G Applications
Software/EDA Channel

An accurate accounting of manufacturing factors such as surface roughness and plating details are missing from the model used for EM simulation, so the in-band insertion loss will likely be higher than this initial estimate. The model approximates 80 percent of the ideal conductivity as a starting point. The quality of the silver plating is very process dependent. The measured data from the manufactured and tested filter can be used to adjust model conductivity information.

From the Chebyshev lowpass filter parameter values (g in Table 1) the external Q and the coupling coefficients (kij) for the resonant pairs are calculated based on Equations 3 and 4, respectively, using a 2.85 percent bandwidth. 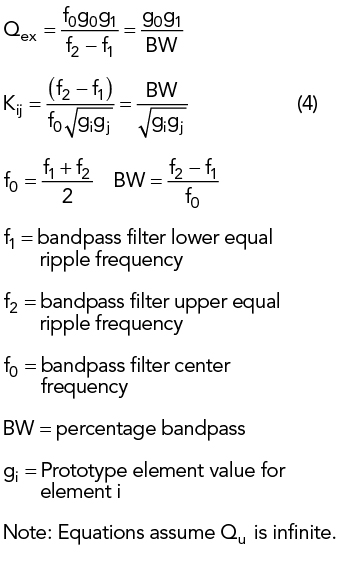 These calculated values provide the targets for the physical design. The next step is to build the coupling coefficient design curves using an EM model of the coupled resonators in order to determine the necessary spacing. 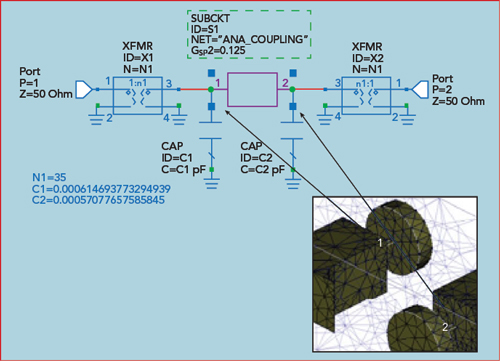 Figure 7 Simulated transmission characteristics of two resonators enclosed in a metal cavity and coupled to input and output ports: cavity spacing equals 0.085 in. (a) and 0.125 in. (b). 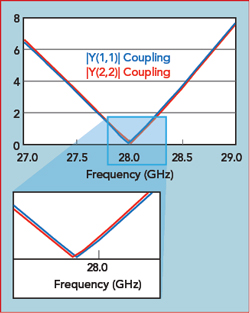 The more closely the resonators are spaced, the farther apart are the resonant peaks; this corresponds to higher coupling. As the resonators move farther apart the coupling gets progressively weaker and the two peaks merge together at the original resonant frequency. It can also be seen that the center frequency between the peaks in Figure 7a are shifted upward 74 MHz for the case where the resonator spacing is 85 mils. The admittance vs. frequency for these two ports is simulated and the capacitor values are optimized to zero out the admittance at 28 GHz, which re-centers the resonant frequency of the coupled pair (see Figure 8). The impact of the small amount of capacitance added or removed in order to center the coupled resonance can then be replaced by adjusting the resonator length to add/remove an equivalent amount of capacitance. 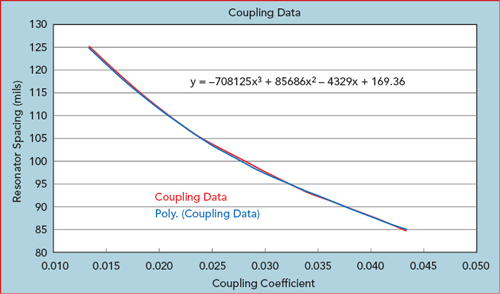 Figure 9 Inverse relationship between the amount of coupling between resonators and their spacing. 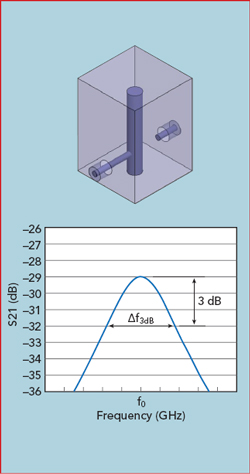 Figure 10 External coupling is found by measuring the 3 dB bandwidth of the resonance curve.

By parameterizing the spacing and tweaking the resonator length through port tuning, a curve relating coupling coefficients to very accurate resonator spacings based on EM analysis can be calculated. From this curve the spacing necessary to achieve a required coupling is determined. The curve in Figure 9 shows the anticipated inverse relationship between the amount of coupling between resonators and their spacing.

Parametric Modeling of the Tapped Resonator

A parameterized EM model including a coax feed that taps into a single resonator is created and the distance from the bottom of the housing to the center of the coax tap is parameterized so that it can be adjusted to different heights to achieve the external Q calculated from the Chebyshev lowpass parameter. A lumped port is also placed between the resonator and tuning screw to support port tuning for addressing shifts in the resonator frequency due to the tap (see Figure 11).

Parameterization is used to sweep values and generate the individual components that are combined to reproduce the entire filter and finalize the design through port tuning using the equal ripple optimization routine. While today’s EM simulators are quite fast and powerful, EM simulation times for low-order filters is still on the order of minutes or tens of minutes. Port tuning moves the optimization process from the EM domain to the circuit theory domain, where simulation times are much faster. Adding a port at each resonator enables rapid tuning of each resonator and the coupling between resonators (see Figure 14).

Figure 12 Simulated reflected time delay for a given tap height. 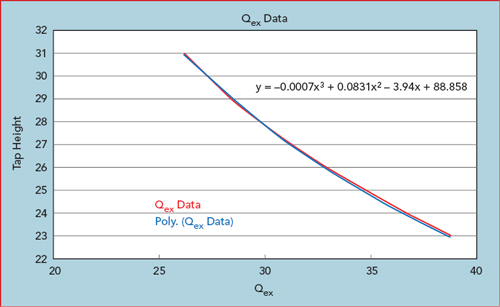 Figure 13 Qex vs. tap height based on a parameterized swept EM analysis of reflected time delay.

With each resonator loaded by a 50 ohm port, the raw coupling between resonators (not coupling coefficients per se) is simulated and the S-parameter variation across the simulation domain is extremely smooth (see Figure 15). In fact, for a narrowband filter, only five to 10 discrete frequencies across the simulation domain are required for the circuit simulator to generate a smooth frequency response plot through interpolation. 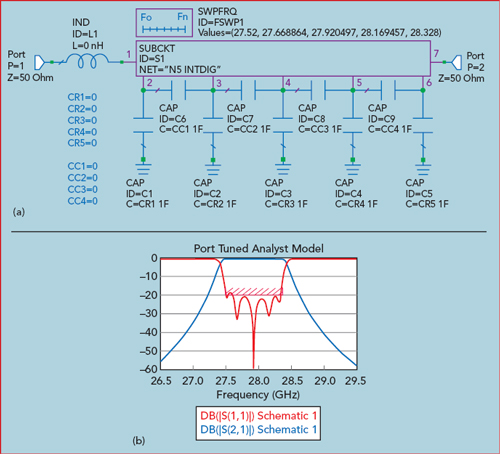 Figure 15 Coupling parameter simulation (a) and resulting S-parameters (b).

The process is repeated until the capacitances become sufficiently small. Convergence is guaranteed if the changes are not too large. Once resonator sensitivities (kHz per mm) are known, capacitance values can be converted into physical changes of the structure. Figure 16 shows the dimensions for the final design, derived from the port tuning. 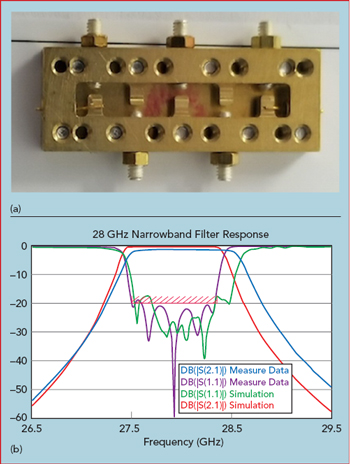 Figure 17 Pre-plated cavity (a) and simulated vs. measured results (b).

From this design, the filter manufacturer (Reactel Inc.) built and tested the cavity filter, shown without the cover in Figure 17a. The frequency response of the measured filter and simulated model is shown in Figure 17b. As designed, the target response is achieved with moderate screw tuning. More precise tuning would better replicate the optimized, simulated result.

Modern CNC machines offer 0.0002 in. tolerances, not including tooling and fixturing. The relationship between 3D EM model and port tuning capacitors (resonators and coupling) can be used to perform yield analysis using the circuit simulator, allowing physical tolerances from manufacturing process to be translated into capacitor tolerances for yield analysis. Yield analysis of microwave circuits is often done with a Monte Carlo-type analysis with a large number of iterations. Running these iterations in the EM domain is prohibitive, but if the computed sensitivities convert a capacitance to a physical dimension, yield optimization is possible through the circuit simulation.

A practical design method that is independent of filter type/construction has been demonstrated, showing a robust equal ripple filter optimization that is a fast and intuitive alternative to design by synthesis and an efficient approach for port tuning complex EM-based filter models. EM tools continue to mature and add capabilities/speed, making it practical to include them in an optimization loop. This technique has been used to address the challenge of designing highly sensitive mmWave filter designs.

A Miniaturized GaAs MMIC Bandpass Filter for the 5 GHz Band