We use cookies to provide you with a better experience. By continuing to browse the site you are agreeing to our use of cookies in accordance with our Privacy Policy.
Home » Push-Push Oscillators Operating at G-Band Using InP DHBT Technology

mmWave and sub-mmWave MMIC frequency sources above 100 GHz are essential building blocks for communication, radar, medical and automotive imaging systems due to the short wavelengths at these frequencies and, consequently, the wide bandwidths that can be achieved.1-2 Several designs have been published, which include a fundamental mode oscillator,3 an oscillator-doubler hybrid architecture4 and a push-push oscillator.5 Of these approaches, the push-push approach is more attractive for high frequency VCO design.6 InP DHBT device technology offers a high breakdown voltage and high power capabilities, as well as outstanding high frequency properties,7 making it a good candidate for frequency sources in this frequency range, as has been well demonstrated.4

The primary requirement for high frequency signal sources is high output power, which is desired in many applications such as automotive radar.8max of the transistor, transistor gain is very low, which makes it difficult to achieve oscillation. The goal is to reach a high oscillation frequency with sufficient output power. To enable oscillator operation near its limit, in terms of frequency (ft and fmax ), a push-push topology is often used with two common-base sub-oscillators operating at half frequency.

InP DHBT technology with an emitter width of 0.8 μm is used in the fabrication of the oscillators. The transistors are grown on a 3-inch InP wafer with an epitaxial profile designed for high frequency. The epitaxial layers consist of a 40 nm carbon-doped base layer and a composite collector.9 Measured S-parameters of the 0.8 × 10 μm2 DHBT demonstrate ft and fmax of 150 and 230 GHz, respectively, at a bias of IC = 14 mA and VCE = 1.5 V. The device breakdown voltage BVceo is greater than 5 V.

The InP DHBT MMIC process includes MIM capacitors, thin film resistors (50 Ω/square), three levels of metal (M1, M2, M3), benzocyclobutene (BCB) passivation and wafer planarization after device formation. Microstrip is employed for low loss. A micro- photograph of the MMIC is shown in Figure 1. The layout is symmetric, with a total chip size of only 560 × 450 μm2, including the DC and RF probe pads. Figure 2 Principle of a push-push oscillator.

The push-push approach em- ploys a symmetric topology operating differentially at the fundamental mode, as shown in Figure 2. Virtual grounds are created for the fundamental signal and all odd harmonics at the symmetry plane, while the even harmonics add in phase. Both of the two G-Band push-push oscillators are based on the schematic circuit diagram shown in Figure 3. It consists of two identical Colpitts sub-oscillators operating at half the desired frequency. In one of the sub-oscillators, an inductive transmission line (Lb) below a quarter wavelength provides series positive feedback, which helps produce a negative impedance when looking into the transistor emitter and collector.10 The open stub, Lo, acts like a capacitance, which also serves as a destabilizing element. Compared with the commonly used Colpitts designed for low frequency operation, a modified version with an added inductive transmission line (Le) employed to improve high frequency performance. 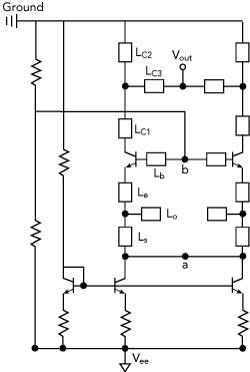 Figure 4a is a simplified diagram of a Colpitts oscillator, and Figure 4b shows the modified version, with Le for high frequency operation. In simulation, the additional inductive element boosts negative resistance at higher frequencies. The effect of Le on the real part of the impedance looking into the DHBT collector is shown in Figure 5. Consequently, the oscillation frequency is shifted higher. Figure 5 Simulated real part of the impedance looking into the DHBT collector.

The fundamental frequency of the push-push oscillator is set mainly by the resonators consisting of Lb, Le and Lo. In this work, the two oscillators are fabricated with different resonator lengths Lb, Le and Lo, for different oscillation frequencies. To ensure proper push-push operation, each sub-oscillator must oscillate in the odd mode and inhibit even-mode oscillation. In Figure 3, the fundamental signals of the two sub-oscillators at points a and b are out of phase, while the second harmonics add in phase; i.e., the fundamental signal is suppressed, and the second harmonic is easily extracted. Figure 6 Measured second harmonic (a) and fundamental frequency (b) of OSC I. The measurement of the fundamental includes 37 dB loss from the W-Band harmonic mixer used for on-wafer test.

Figure 6 shows the measured spectrum of OSC I at the second harmonic and fundamental. OSC I delivers an output power of −6 dBm to a 50 Ω load at 161.6 GHz, while the fundamental signal output power is only ‐ 27 dBm (i.e., 21 dBc fundamental suppression). The circuit employs a single supply voltage Vee = ‐ 3 V with a total current drain of approximately 40 mA; the bias current mirrors consume more than half the DC power. The oscillator core consumes about 45 mW, corresponding to a DC-to-RF efficiency of 0.56 percent. OSC II delivers an output power of −25 dBm at 204.8 GHz. The output power is low because the oscillation frequency is very close to the transistor ’s fmax

Table 1 lists several reported HBT-based oscillators operating above 100 GHz. This design at 161.6 GHz achieves higher output power than the others, at close to fmax. This is attributed to the modified Colpitts topology and the harmonic matching technique.

Two monolithically integrated harmonic oscillators operating at G- Band use a push-push Colpitts topology and harmonic matching to operate at frequencies close to the transistor fmax. The output power of the two oscillators is −6 dBm at 161.6 GHz and −25 dBm at 204.8 GHz. DC-to-RF efficiency of OSC I at 161.6 GHz is 0.56 percent after subtracting the DC power consumption of the bias current mirrors.