We use cookies to provide you with a better experience. By continuing to browse the site you are agreeing to our use of cookies in accordance with our Privacy Policy.
×
Home » GNSS Performance Test Solution from R&S Validates eCall Modules
European Industry News Industry News IoT/M2M/V2V Channel Test and Measurement Channel

Approximately one year after ERA-GLONASS became mandatory for Russia and the Eurasian Customs Union, the use of its European counterpart eCall will become obligatory as of April 1, 2018. From that date, all newly registered cars and light trucks in the European Union must be equipped with the eCall automatic emergency system.

Before eCall or ERA-GLONASS modules can be integrated into cars, they need to be certified. They have to undergo a series of conformance and performance tests, which must be in line with applicable standards. A new option for the R&S SMBV100A vector signal generator together with test automation software delivers standard-compliant, fully automated performance tests for the GNSS receiver integrated in the eCall module. The new R&S SMBV-K361 eCall test suite is now available from Rohde & Schwarz.

The GNSS receiver integrated into the eCall module typically evaluates signals from GPS, Galileo and satellite-based augmentation systems (SBAS) to determine the vehicle position. In an emergency, the module automatically places a call to the nearest emergency call center and transmits vehicle position data and other information via a cellular link. To make sure the accuracy of the reported position as well as a number of other performance parameters are within certain limits, the built-in GNSS receiver has to be tested against the criteria defined in the EU2017/79, Annex VI and UNECE 2016/07 specifications. 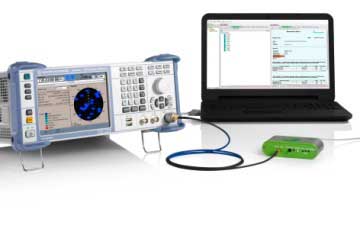 The R&S SMBV100A in combination with the new R&S SMBV-K361 option and the R&S CMWrun sequencer software is the ideal tool for performing fully automated GNSS performance tests on eCall modules in line with the EU2017/79, Annex VI and UNECE 2016/07 specifications. All test cases specified in these documents can be configured, scheduled and conducted automatically with this solution. It enables users to quickly and easily verify the positioning capabilities of their eCall modules and to tremendously simplify and accelerate the certification process.

With this new GNSS performance test solution for eCall modules, Rohde & Schwarz offers a complete portfolio of standard-compliant conformance and performance test solutions for both eCall and ERA-GLONASS based on the R&S CMW500 and R&S SMBV100A. For a limited period, special promotion packages are available for both platforms, with discounts up to 30%. For more information on eCall test solutions from Rohde & Schwarz, visit: www.rohde-schwarz.com/ad/press/ecallsolutions.