We use cookies to provide you with a better experience. By continuing to browse the site you are agreeing to our use of cookies in accordance with our Privacy Policy.
×
Home » E-Band Quadrature Mixer 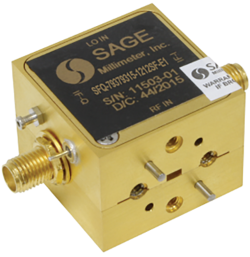 The quadrature mixer, commonly known as the I/Q mixer, is configured with two individually balanced mixers and their respective LOs driven from the outputs of a 90-degree hybrid. It is widely used when single sideband (SSB) rejection is required. In communication systems, the I/Q mixer is often used as a SSB modulator or demodulator, where the image band signals, either upper or lower, can be rejected by appropriately phasing the IF signals. In Doppler radar systems, the I/Q mixer as a demodulator delivers two orthogonal IF signals that represent the direction of a moving target, either approaching or receding. It can also be used as a modulator for simulating a Doppler radar target.

SAGE Millimeter has released an E-Band quadrature mixer for radar and communications systems operating at E-Band (75 to 84 GHz). The SFQ-79379315-1212SF-E1 has a typical conversion loss of 15 dB, with an LO drive of +7 dBm and external bias of +4.5 VDC and 2 mA (typical). LO to RF isolation is typically 22 dB, and the IF bandwidth extends from DC to 2 GHz. Since the IF ports are DC coupled, the mixer can be used as a phase detector. Typical amplitude and phase balance of the I/Q outputs are ±1 dB and ±15 degrees, respectively. The mixer can be configured as an image rejection mixer or SSB modulator by adding an IF quadrature coupler.

The quadrature mixer uses WR12 waveguide with UG387/U flanges for the RF and LO ports and female SMA connectors for the IF ports. DC bias is applied via soldered pins. The mixer is packaged in a gold-plated housing weighing 1.8 oz and measuring 1.15 in x 1.15 in x 0.88 in, making it convenient for system integration.

SAGE Millimeter offers a family of quadrature mixers for the entire 18 to 110 GHz spectrum.