We use cookies to provide you with a better experience. By continuing to browse the site you are agreeing to our use of cookies in accordance with our Privacy Policy.
×
Home » Two-Stage, 48 V, LDMOS Driver IC for Cellular 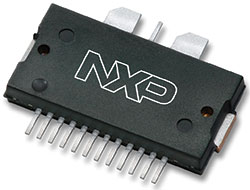 The transition from analog to digital over-the-air television broadcasting in the U.S. and Europe is freeing up significant amounts of spectrum. Digital video compression allows up to eight digital TV channels to transmit in the same amount of spectrum required by only one analog channel. Digital signals do not require the wide guard bands needed by their analog counterparts for interference protection. Collectively, the digital transition has made spectrum available for use by wireless services in the U.S. and Europe, called the first and second “digital dividends.” Although the second digital dividend that makes spectrum between about 600 and 700 MHz available is still in the making, it will allow frequency harmonization between the U.S., Europe and other markets. When compared with its higher frequency counterparts, greater distances can be covered with fewer base stations in the 600 to 700 MHz region. This makes serving rural areas much less expensive and provides better penetration of buildings and other structures.

Carriers are moving toward multiband and wideband applications to reduce operating costs, and adopting carrier aggregation (CA) to increase data rates. CA is a key capability of LTE-Advanced that allows mobile network operators to combine up to five (currently) carriers, typically non-contiguous, in the downlink to increase peak data rates and overall capacity. The simultaneous transmission requirement of CA is especially important below 1 GHz, where base stations cover more area. 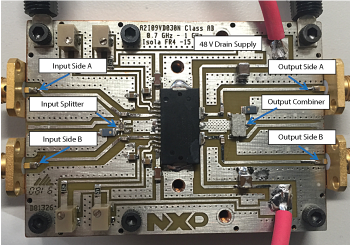 Figure 1 A dual-path amplifier using the A2I09VD030N IC. The hybrid splitter on the input and combiner on the output can be connected for single-path operation.

To serve these new spectrum deployments and CA needs, NXP Semiconductors has introduced the A2I09VD030N very high voltage (VHV), two-stage driver integrated circuit. It is the first commercially available product of its type, operating at 48 VDC and integrating two amplification stages rather than the usual one. Since inception, cellular systems have typically used a 28 VDC supply voltage, but a transition to 48 VDC is occurring, initially below 1 GHz. Raising the voltage effectively doubles the power density of the devices in the amplifier chain. The A2I09VD030N’s higher voltage operation and two stages of amplification enable smaller devices to produce a specific RF output power, reducing the size of the base station power amplifier, which allows the size of the base station to be smaller. This supports current market needs, as wireless carriers strive to deploy smaller base stations, especially remote radio heads where the power amplifier is at the top of the tower.

This new NXP IC is a broadband amplifier, operating from 575 to 960 MHz. The gain of the two-stage A2I09VD030N is greater than 31 dB; coupled with a final amplifier gain of about 19 dB, the total lineup has 50 dB gain. Consequently, a base station requires only two devices, instead of three, to achieve the required gain of 45 dB with sufficient margin. The A2I09VD030N is also a dual-path device, so it can be used in different amplifier architectures: combined with a 3 dB hybrid (see Figure 1), used as two separate drivers or combined in a Doherty configuration as the final stage driver. Operating from 920 to 960 MHz, the A2I09VD030N produces 40 W of peak power with 34 dB of gain and 20 percent efficiency at a 10 dB output back-off. Adjacent channel power ratio (ACPR) is about ‐44 dBc (see Table 1). The device is an excellent driver for several NXP high-power VHV transistors, including the A2V09H525-04N and A2V07H525-04N, which forms an 80 W base station amplifier lineup.

The A2I09VD030N is in production, and NXP is working on smaller and higher power versions, to offer a more complete portfolio.

The digital dividends are a bonus for the cellular industry, enabled by the adoption of digital television technology. Although the new spectrum in the U.S. is not yet deployed, the “reverse” auction has completed, and the FCC has established a timeline for implementing the new mobile frequencies—which are in the “sweet spot” where signal propagation is well-suited for wireless communications. The new NXP IC is designed to optimize performance at these frequencies. By operating at 48 V, base station power amplifiers can be created with fewer RF power devices, consuming less power and reducing size.