We use cookies to provide you with a better experience. By continuing to browse the site you are agreeing to our use of cookies in accordance with our Privacy Policy.
×
Stay Connected :
Home » GaN Powers Microwave Point-to-Point Radios
Broadband Channel

Gallium arsenide (GaAs) has been the key technology enabler for high performance power amplifiers and receiver low noise amplifiers in the microwave frequency bands; however, the maturity of gallium nitride (GaN) technology provides an opportunity for substantial system level improvements. The high dielectric breakdown field of GaN results in higher voltage operation and hence higher power densities. With the help of GaN, the efficiency and the maximum output power of a microwave radio can be substantially increased — directly impacting the network cost of ownership. Today, GaN monolithic microwave integrated circuits (MMIC) are being introduced in commercial microwave radios.

Today there are as many mobile subscriptions as there are people in the world and the number of subscribers, which now includes machines and things, is rising at an increasing rate. High performance microwave radios have been key enablers in achieving the successful rollout of mobile networks. By 2020 it is expected that 65 percent of the radio base station sites (excluding China, Japan, Taiwan and South Korea) will be connected to a core network via a microwave radio.1

The major advantages of microwave radios are fast time-to-market and low cost of ownership. Two important parameters influencing cost of ownership are energy efficiency and system gain. Increasing the system gain allows for the use of smaller antennas while maintaining capacity and link availability. Cost of ownership is typically dominated by site rental which often represents 30 to 50 percent of the total cost.2 A small antenna size results in a lower rental cost due to reduced wind loading of the mast. This also leaves room for additional radio links.

There are a number of components in the radio system enabling improved system performance such as high gain/high efficiency power amplifiers (PA), low noise receiver amplifiers (LNA) and error correction codes that regenerate incoming signals and mitigate disturbances such as interference, noise and spurious.

The available frequency bands for microwave radio span from 6 to 70/80 GHz with a total available bandwidth of about 40 GHz. For the traditional microwave bands (6 to 42 GHz), available channel bandwidths vary from a few MHz up to 112 MHz at the highest carrier frequencies. At 70/80 GHz, the channel bandwidth is wider than 1 GHz. To use the available spectrum in the most efficient way, modern radio systems often support modulation formats up to 4096-QAM. Figure 1 shows the use of different frequency bands for microwave radio applications around the world. The most used bands are between 15 and 23 GHz.

Existing barriers to wide-scale adoption of GaN technology in microwave point-to-point links is wafer pricing, packaging and memory effects due to trapping. The current generation of GaN MMICs is manufactured on semi-insulating silicon carbide (SiC) substrates. This technology provides the highest performance but not the most attractive price. Today the industry is moving to 6-inch SiC substrates, which helps push cost towards similar levels as GaAs. To further reduce cost, several companies are focusing on GaN-on-Silicon (GaN-on-Si) technology. GaN-on-Si is not as mature as GaN-on-SiC, however, and the performance will not be as high. One reason is the lower thermal conductivity of Si compared to SiC.

Trapping in the GaN transistor may result in dynamic effects with slow time constants in the range of milliseconds to seconds.19 The effects can appear as abrupt changes in small-signal gain following high output power events. This is more of an issue for radio base stations having very bursty traffic patterns than for microwave radio links where output power changes less rapidly.

A power amplifier is at maximum efficiency when operating at peak output power, while lowering the output power will significantly reduce efficiency. For linearity, the converse is true; the most linear operation is achieved at low output power. To mitigate the impairments associated with high efficiency operation, digital predistortion (DPD) techniques are used to compensate for power amplifier nonlinearities.

Power amplifiers for radio base stations are typically optimized for efficiency; power-added efficiencies as high as 50 to 70 percent are not uncommon. Linearity is then recovered using DPD techniques. This focus on efficiency is motivated by the high output powers (100 W average) of these base station systems. Even a moderate increase in power-added efficiency leads to a significant reduction in power consumption and cooling requirements.

Power amplifiers in microwave radios for point-to-point communications are operated Class AB to support high order modulation schemes (up to 4096-QAM). If a DPD system is available, it is typically used to enable high order modulation rather than for boosting efficiency. The maximum saturated output power for a GaAs MMIC amplifier is about 40 dBm up to 10 GHz, falling to about 26 dBm at 86 GHz (E-Band). The associated maximum efficiency is about 35 percent up to 10 GHz and about 15 percent at 86 GHz. For linear operation (i.e. 10 dB from saturation), these efficiencies drop rapidly to below 10% (3% to 10% depending on frequency). These power levels represent what is possible to achieve in a commercial setting. Striving for higher output power increases cost and power consumption.

For most point-to-point frequency bands, there are a number of organic packaged GaAs MMIC power amplifiers. For the lower frequencies, saturated output power typically lies in the range of 2 to 4 W and the power-added efficiency for linear operation is slightly less than 5 percent. Table 1 shows the typical performance of commercially available packaged GaAs Class AB power amplifiers. Taken from vendor datasheets, it serves as an illustration of the current state for point-to-point amplifiers: linear operation at the expense of efficiency. 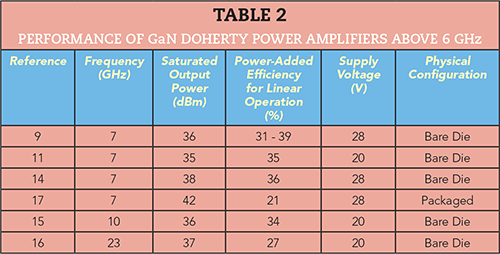 Given the success of the Doherty amplifier in the radio base station market, there have been attempts to carry over the Doherty technology to the point-to-point segment. The principal circuit level challenges have been the shorter wavelengths in the point-to-point communication bands and the low power density of GaAs. Shorter wavelengths necessitate an integrated solution in contrast to the sub-6 GHz Doherty amplifiers, where the combiner and splitting networks are implemented on the amplifier printed circuit board. The low power density of GaAs puts a limit on the maximum output that can be achieved. With the advent of short gate length GaN MMIC technology, it is finally possible to realize Doherty power amplifiers beyond 6 GHz, delivering more than 10 W in saturation.

Recent work with GaN Doherty power amplifiers operating primarily in the 7 GHz bands9-15 and at 23 GHz16 show that state-of-the-art GaN technology is capable of achieving a power-added efficiency of 30 percent (with 8 to 9 dB back-off) and more than 20 W of saturated output power (see Table 2). In 2012, Gustafsson et al.,11 demonstrated the performance of a GaN MMIC Doherty power amplifier operating in a microwave radio band (see Figure 3). Figure 4 shows its efficiency. Using a DPD system, the amplifier achieved an average efficiency of greater than 35 percent while keeping its adjacent channel leakage power ratio (ACLR) below ‐48 dB for a 10 MHz 256-QAM signal. 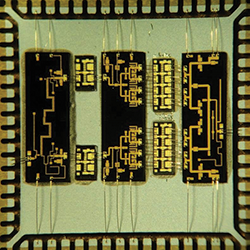 Figure 5 GaN hybrid power amplifier before overmold application.17 The power transistors are GaN HEMTs, and the passive input, interstage and output networks are fabricated in GaAs.

More recently, Gustafsson et al.,17 demonstrated  the performance of a GaN hybrid Doherty amplifier. The hybrid approach with passive GaAs for matching circuits limits the GaN content, which has the potential to lower the cost of the Doherty amplifier. The two-stage hybrid amplifier consists of an integrated passive GaAs input, interstage and output matching circuits and GaN power bars for the amplifier stages. Figures 5 and 6 show the inside of the package and the packaged amplifier, respectively. Using a DPD system, the amplifier delivered 34 dBm average output power with a 50 MHz 4096-QAM signal at an average power-added efficiency of 20 percent, while fulfilling Class 8B ETSI spectral requirements18 (see Figure 7). Linearization was performed using direct learning table DPD (24 tables, 16 bins) with least square estimation of the table coefficients. 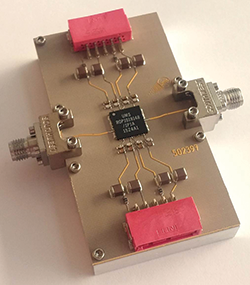 This demonstration shows that GaN and Doherty operation can increase the efficiency well beyond what is achievable in GaAs. As previously mentioned, the Doherty amplifier must be augmented with DPD. The wide bandwidth of point-to-point channels—up to 112 MHz for the traditional microwave bands —puts tough requirements on the digital predistortion system. To compensate for seventh-order nonlinearities, digital-to-analog converters should run with at least 7x oversampling (i.e., > 784 MHz). The same goes for the analog-to-digital converter in the local observation receiver (>784 MSPS). In addition to high data rates, vertical resolution should be high enough to support very high modulation rates (i.e., 4096-QAM). These data converters have been historically power hungry and, thus, the efficiency of the whole radio system is compromised. By using state-of-the-art data converters, however, it is now feasible to design digital predistortion systems with low enough power consumption.

The Promise of GaN PAs in Microwave Point-to-Point Radios

There are two main uses for GaN in commercial microwave radios. The first is to leverage power density to increase output power and, thus, system gain. Using short gate length GaN MMIC processes (e.g., 0.15 µm), it is possible to substantially increase output power, compared to GaAs, up to at least 23 GHz. This comes at the cost of increased power consumption, as amplifier efficiencies are expected to improve marginally. The other use is to improve efficiency by introducing high efficiency power amplifier architectures (e.g., Doherty). With a high efficiency amplifier, it is possible to increase output power while also decreasing power consumption. Furthermore, the thermal footprint of the amplifier is reduced, enabling simpler cooling solutions.

Figure 8 shows the required DC power as a function of power amplifier efficiency for three different average power levels (30, 33 and 36 dBm). The circled areas indicate typical performance regions for GaAs Class AB, GaN Class AB and GaN Doherty power amplifiers. By replacing GaAs with GaN, an incremental increase in efficiency is achieved. At these relatively low efficiencies, however, even an incremental increase leads to substantial power savings. An increase from 5 to 10 percent power-added efficiency can reduce power consumption by 10 W and, hence, lower the total cost of ownership. The use of  GaN Doherty power amplifiers enables power-added efficiencies in the range of 25 percent. This not only decreases power consumption but also increases system gain and output power.

Looking at GaN opportunities in terms of carrier frequency, there are two distinct regions (see Figure 9). The first is at lower frequencies (up to about 13 GHz), where efficient Doherty operation has been demonstrated. Here one can take advantage of increased efficiency and reduced energy consumption or increased output power without increased power consumption or an enlarged thermal footprint. This region utilizes the full potential of GaN technology. The gray area indicates a transition region between Doherty and Class AB power amplifiers; which technology is best to use depends on the efficiencies that can be achieved from Doherty amplifiers above 15 GHz. For the higher frequency bands (18 GHz and above), it is now possible to replace existing GaAs power amplifiers with high power GaN versions to increase output power.

GaN technology is now being introduced in commercial microwave radios. While the first wave of products provides only an incremental reduction in power consumption, Doherty amplifiers at microwave frequencies enabled by GaN and high performance data conversion technology will, in the coming years, provide power and efficiency improvements, just as they have for the base station market.